To Florida For Christmas!

Finally I have reached the point where I can start telling you about my trip to Florida – and I’ve already been in Florida for more than two full days! Funny how that happens when you’re busy having a good time!

While my dad and I were eating dinner in Boston, my sister texted me to tell me we’d be flying first class on the way to Florida. I hadn’t flown first class since I was an infant on my mom’s lap, so I was pretty pumped. Turns out they were trying to get us out of coach to make room for more people on the plane, and my dad has mucho reward points, so upgraded we were!

I don’t care if it’s obvious I haven’t flown first!

Before we got on the plane the trip was already off to a great start, given the fact that I spotted the youthful version of Santa…

…and an adorable 8 week old Dachsund named Roscoe, whose friendly owner was kind enough to let me creep on her puppy!

Once we were seated I ordered Jack Daniels Tennessee Honey, straight up. 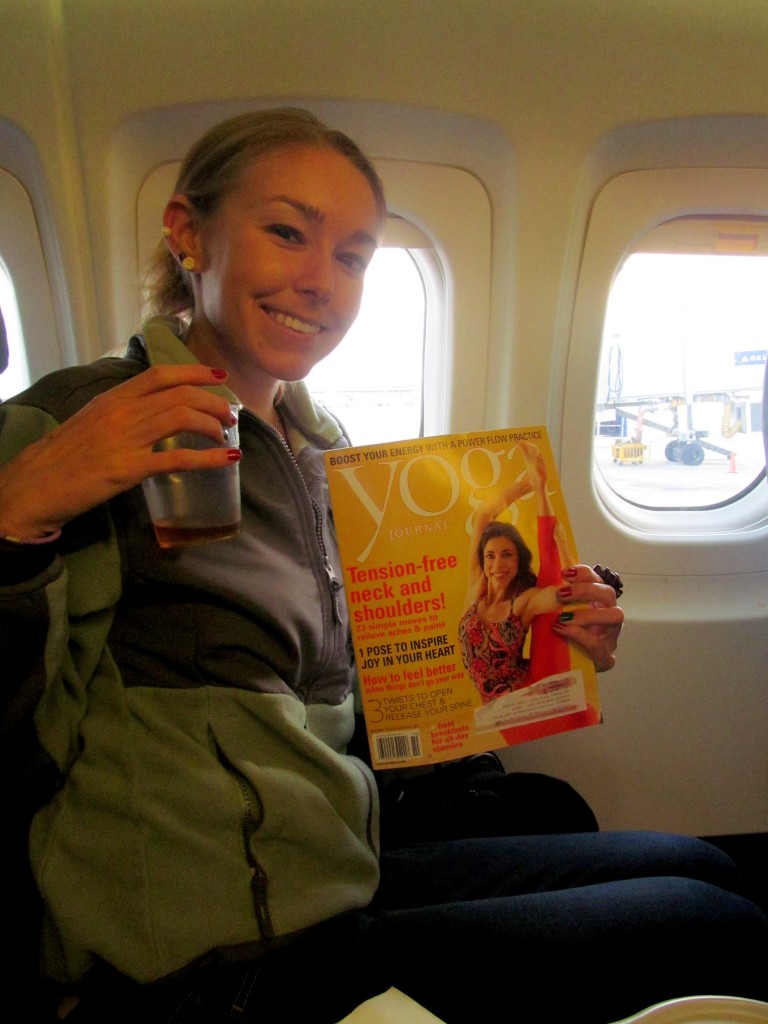 I later ordered Woodford Reserve (also straight) but gave most of it to my dad because I realized that the first-class allure of free alcohol was more so allure than me actually WANTING any alcohol. Plus I busted out my salad beast that I’d packed for dinner (obviously) and lost interest in anything but the veg. Also, the crumbs at the bottom of the Trader Joe’s Nacho Kale Chips bags are FANTASTIC in salads. Take notice, people.

The flight attendant commented to my mom that he was quite impressed by the fact that I could drink beverages way stronger than those he could drink. He also obviously questioned my age since I look about 16, but my dad vouched for me.

The same thing happened on the second flight, where I enjoyed a glass of surprisingly yummy red wine as I edited photos. Again, my mom vouched for my age. I didn’t help things by declaring to the flight attendant that I was ordering wine because I’d just finished my homework. He stared at me skeptically and said, “Grad school right?” OF COURSE sir!

I sat next to Hannah on the first flight, and we had a little bit of fun. Just a little. 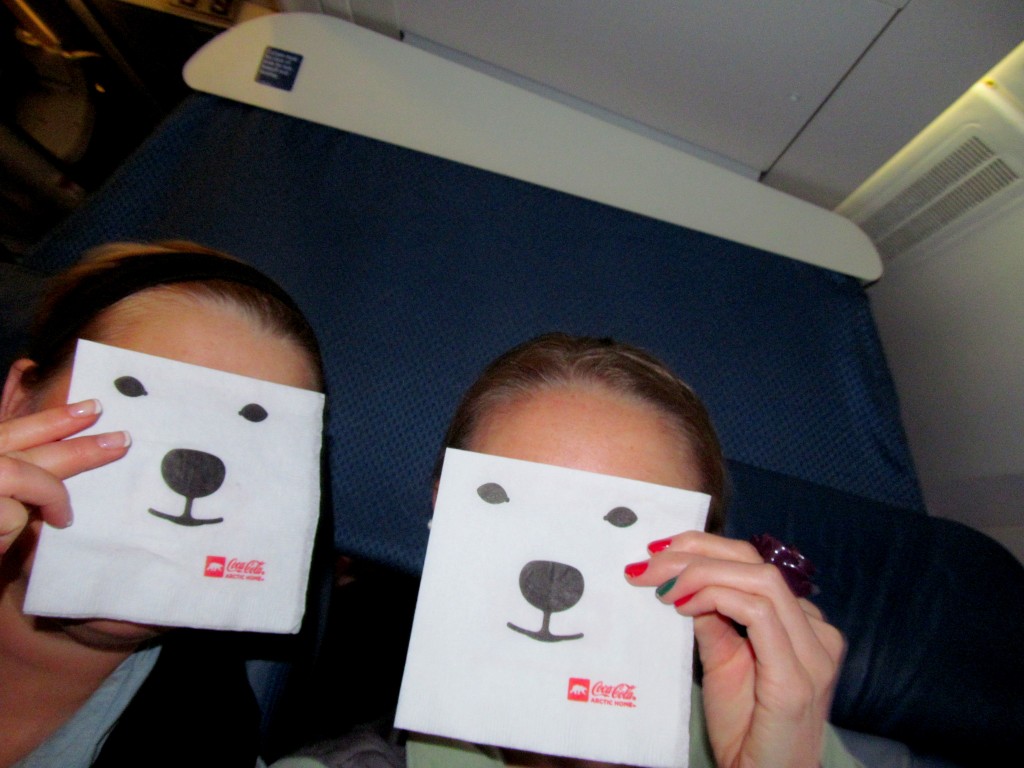 When we landed I took a cheesy I’M WARM, I’M IN FLORIDA photo by a cheesy postcard backdrop that was begging to be in a photo. 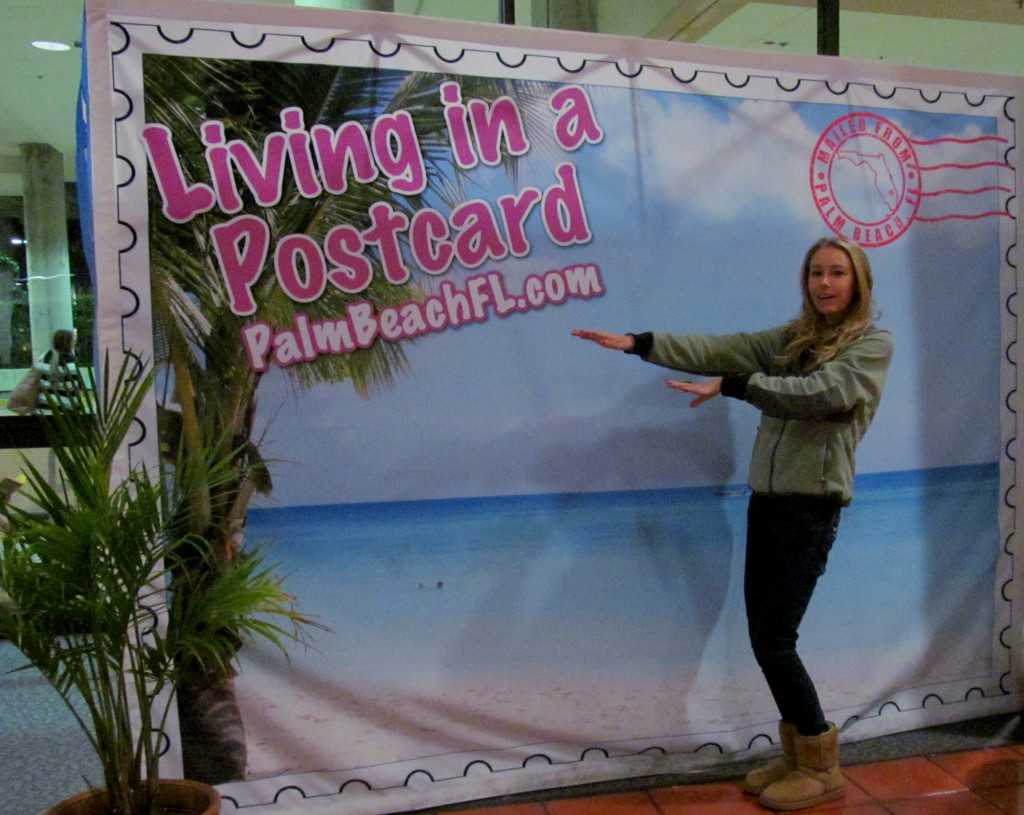 Long story short, we got to our condo, I had some leftover veggie Domino’s pizza my mom had left in the freezer from her last Florida visit, and passed out.

Cute Christmas tree in our condo!

I woke up on Christmas morning and since we’d already opened all of our presents, it just seemed like a normal day. Well, as normal as a day can be while vacationing in Florida. I did some yoga and some HIIT on the Tone It Up Beach Babe DVD, and took advantage of my mom being around by asking her to snap a photo of me during the infamous portion of P90X Yoga with “the grab”. Ouch. 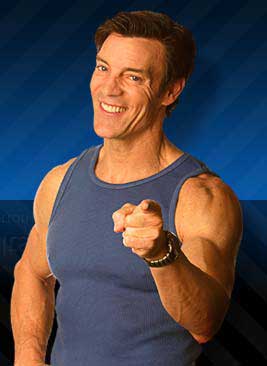 Thankfully Starbucks was open on Christmas for a venti black iced coffee to bring with me poolside. I read magazines, enjoyed breakfast and lunch, and made some new friends in the sun. 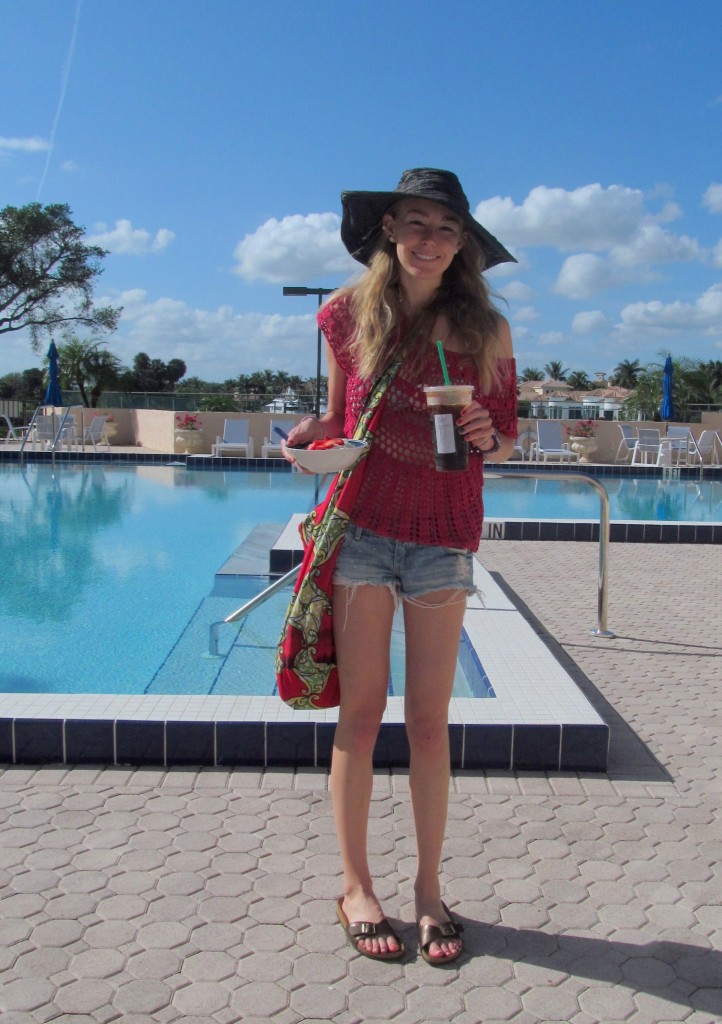 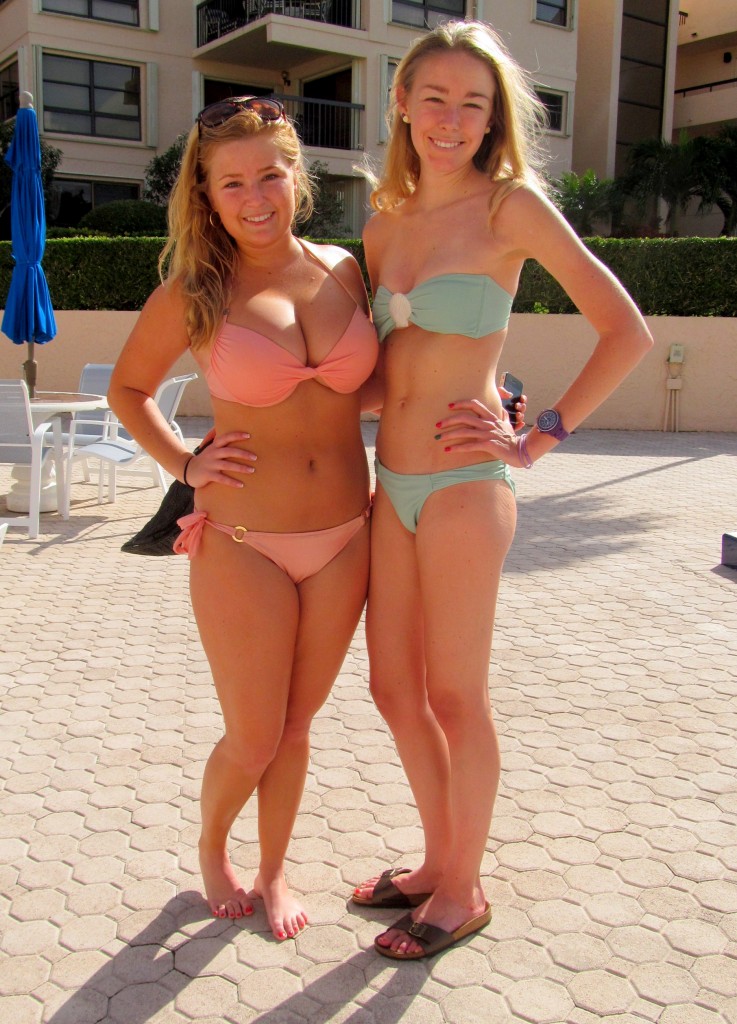 Eventually it was time to head over to Downtown at the Gardens to grab traditional Christmas dinner take-out from TooJay’s Gourmet Deli…and I had very special company while I waited for the food. Company in the form of a blend, Amy of My Life As A Lazy Girl! 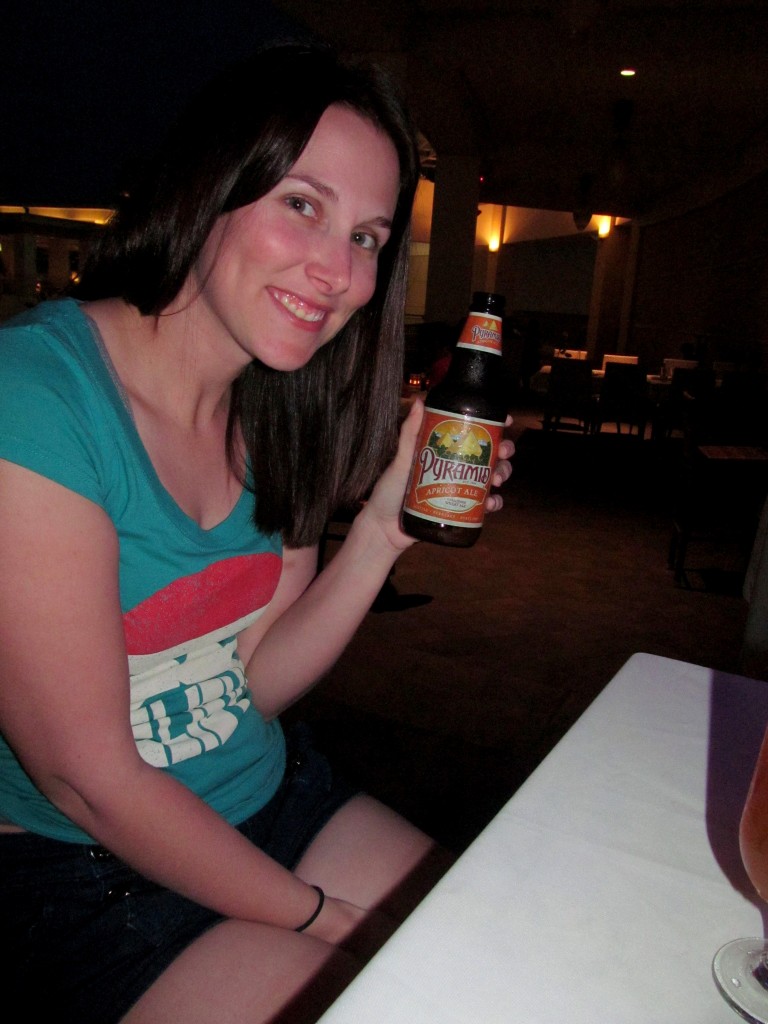 Amy and her great choice!

We shared a beer at MJ’s Fresh, the only other restaurant open. Amy is a beer lover and she picked out a winner for sure – Pyramid Apricot Ale. It was so light and refreshing that I really think I could totally finish a whole bottle. I’ve never really been able to say that about a beer before!  So yummy. 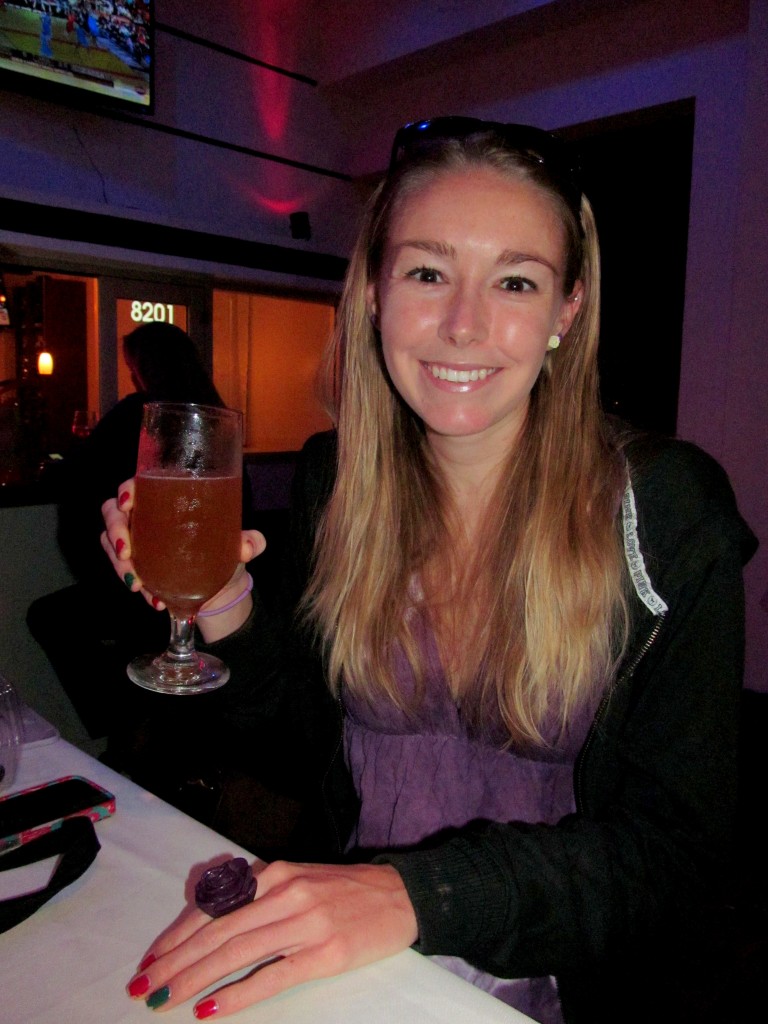 Our waitress forgot about us for awhile so we even ended up getting the beer for free! And our table featured a very romantic rose. Oo la la. 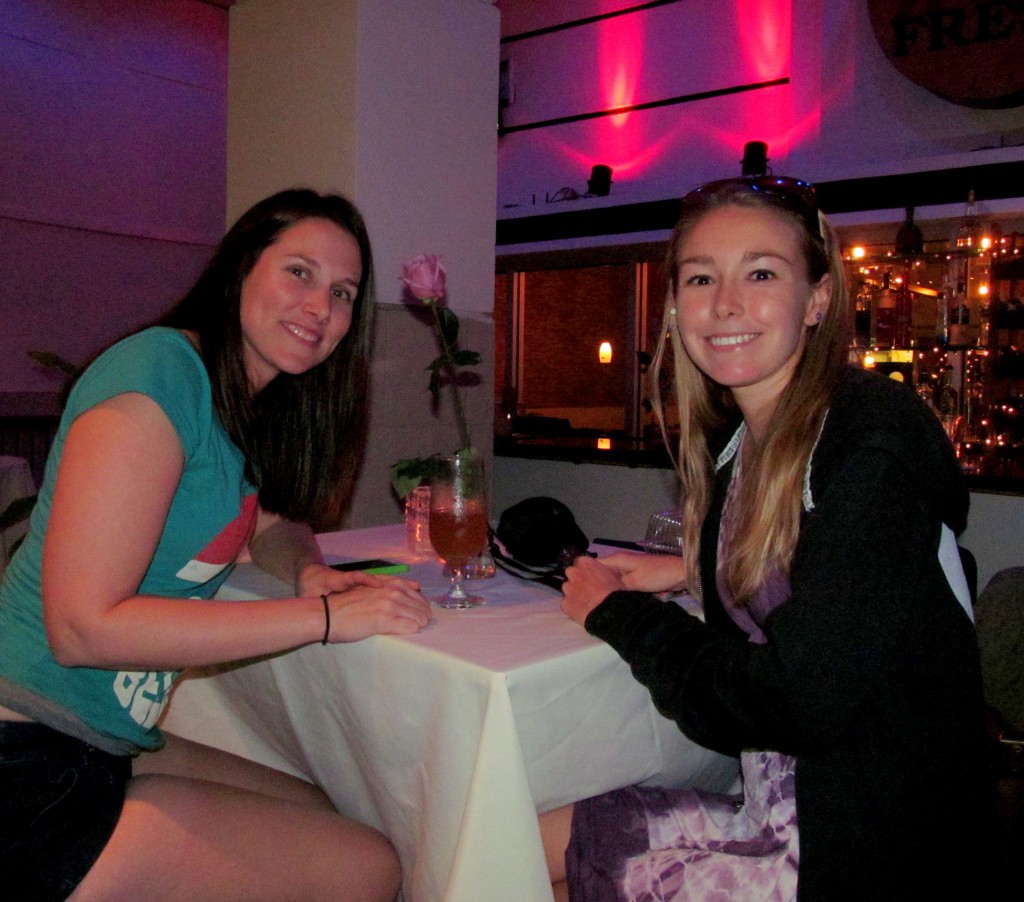 That rose REALLY set the mood.

Amy and I have been talking about meeting up since we discovered during my last Florida visit that we are familiar with and love many of the same local restaurants, given that we both grew up in the Palm Beach Gardens area. So glad we finally were able to – and we both picked up TooJay’s famous black and white cookies of course! 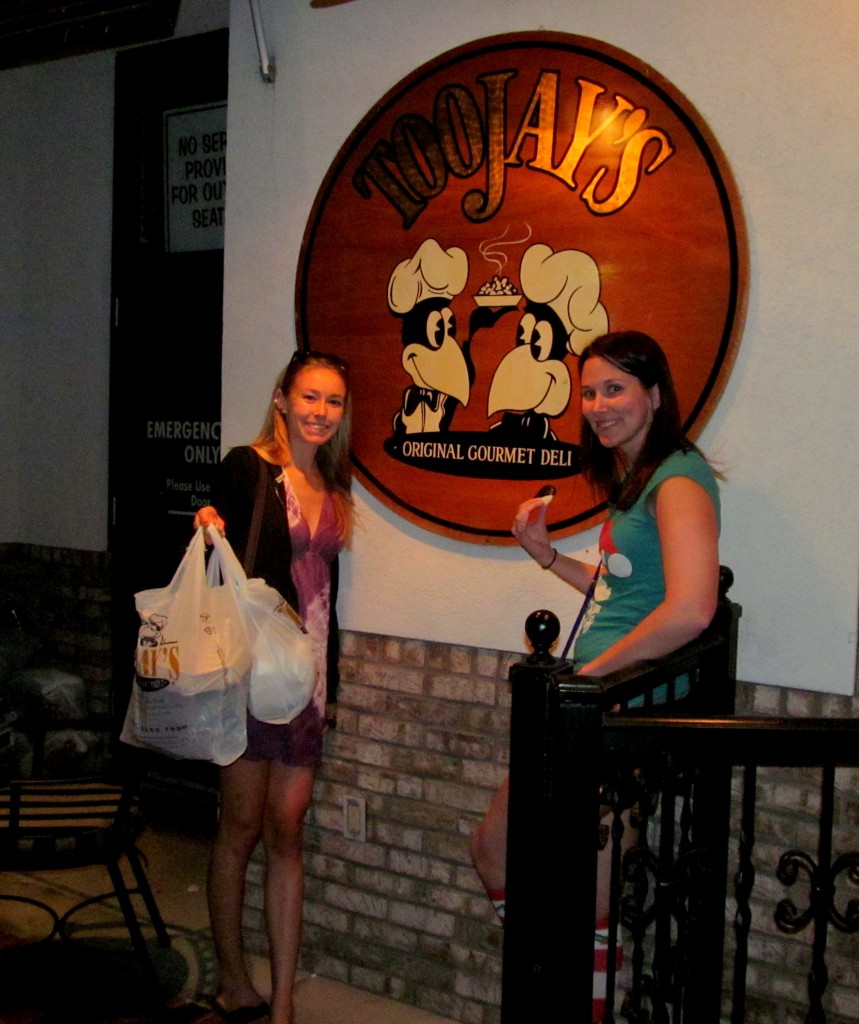 Amy and I parted ways after I picked up my take-out dinner, and my grandparents were certainly grateful that I brought it to them – and I like to think they were also glad to have me as company for Christmas dinner! I ordered a sampler so I could try as much as possible – of course. 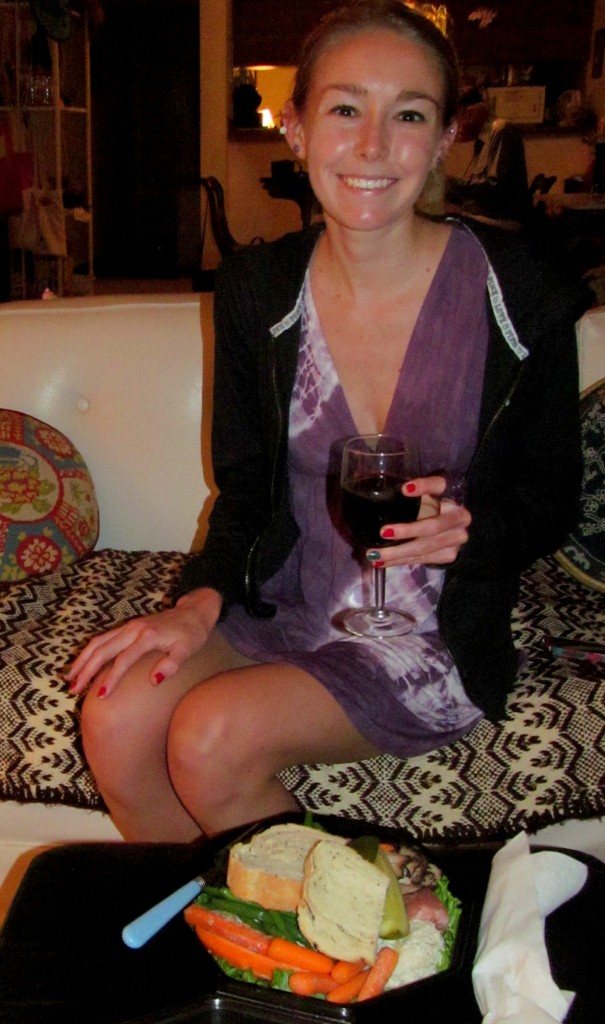 I got mucho veggies and pickles with coleslaw, potato salad, turkey pastrami, whitefish salad, and TONGUE! Surprisingly the whitefish salad didn’t taste that great to me and I didn’t have much of it. I polished off the turkey pastrami and tongue though! Both tasted nice and smokey though I still have to say the turkey pastrami, which I knew I loved, remains my favorite. I’m just glad I finally had the chance to sample tongue, a richer and fattier meat. I totally loved the coleslaw and potato salad; usually I don’t go for those sides and had asked for green beans instead, but TooJay’s gave them to me anyway (sweet) along with the green beans, and I totally felt like I was craving them. So I tried to roll with it, even though I don’t usually classify coleslaw or potato salad as “healthy” side choices. Still trying to just do me! I felt pretty full even though I didn’t finish my dinner (did finish lots of my grandpa’s fabulous dill chicken salad though) and just tried to chill with my wonderful family and accept that it’s okay to feel full, that a full and satisfying feeling will pass in time. I may be a work in progress, but the key word is PROGRESS.

Overall my trip to Florida and first full day AKA Christmas Day were great and my vacation has been going wonderfully. I am of course behind on recapping and writing/publishing posts about my experiences several days after they’ve occurred but I’ll catch up eventually!

Have you ever flown first class? Did/does it make you feel special?

Any blend meetups on the agenda for you during this holiday season?

What did you have for Christmas dinner, or just December 25th dinner if you don’t celebrate Christmas?