It’s Friday and I’m taking a half day at work today (holla) and have a lot of random stuff to say. Perfect day to join Clare‘s Five Things Friday party so I can be ADD and talk about all the things!

If you participate, make sure you link-up!

1. Today I get to see two very special people!

The reason for my half-day at work today is because I’m the lucky duck who gets to pick up this lady from the airport. 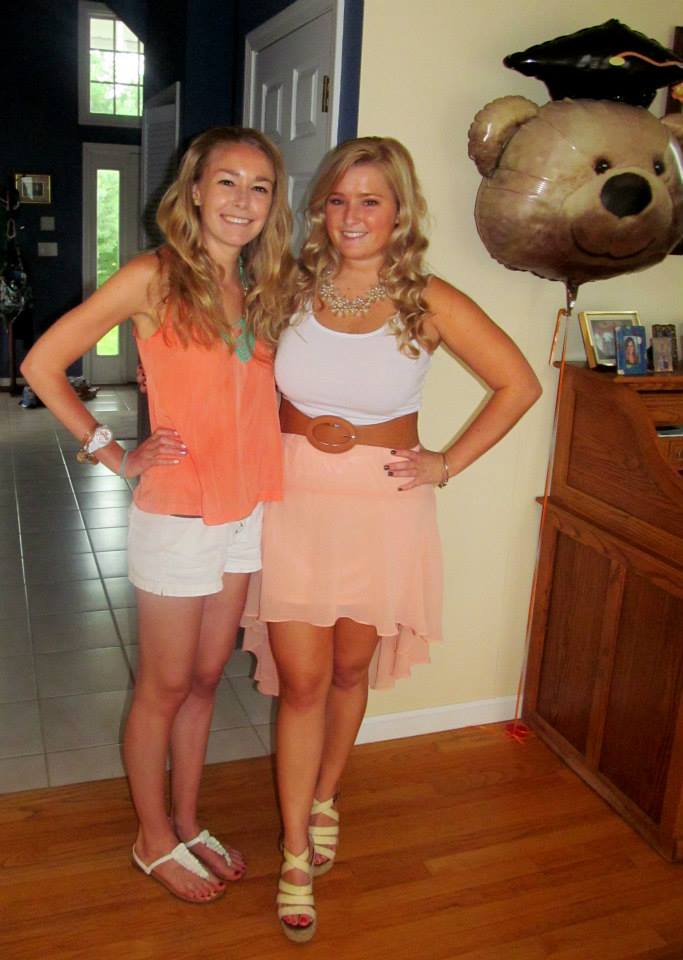 My sister Hannah is coming home for winter break, from school in Tennessee! Don’t mind the graduation bear balloon to the right.

It seems like just a second ago that she and I were together for the Thanksgiving holiday, but that doesn’t mean I’m any less excited than usual for her to come home. After I drop her off I’m hitting the gym and then the road to Fairfield to stay over with…

…Kaitlin! Except we won’t be quite this dressed up.

My blonde blend/twin and I have plans to visit Mama’s Boy for a cocktail (I’ve been dying to go since her rave review), attend a holiday party, and take a spin class at Zenride. As usual plenty of fun to be had…it’s not hard for us to find things to do that we agree upon! I’m also psyched to see her dog Brady, who is in fact my boyfriend. So I guess today I’m seeing two very important people and an important dog.

This past weekend I had the chance to have not one but two Manhattans made with Connecticut’s first aged whiskey, from Onyx Moonshine. I visited Krust in Middletown, CT for dinner on Friday and Market Grille in Manchester, CT for dinner on Sunday. Those two restaurants are the only ones that received any of this limited-edition whiskey (the rest went to package stores). Am I the only person who visited both restaurants and drank the whiskey at each one, in the same weekend? I sure hope so. Either way I feel pretty good about it.

No picture of my Onyx Perfect Manhattan at Krust, but I did get a prom pic with Onyx’s own Signature David, so that is all the more fantastic.

The HUGE Manhattan at Market Grille…its size made me both psyched and relieved (that my dad was driving).

3. This past weekend and week have taught me many “all’s well that ends well” lessons.

I seriously spent a lot of time over the last week fretting and future-tripping. And most of the time, everything worked out just fine. I fretted over the fact that I had two separate drinks-and-catch-up plans on Sunday, but then one got cancelled and I was left with one, which I was way more comfortable with. I fretted over having dinner plans that same night that were making me nervous, but those got cancelled too and I ended up at Market Grille with just my dad, who always keeps me chill. I debated and pondered over whether or not I “should” do arms after spin class on Wednesday, ended up deciding to just do it, and was relieved I had done so when I found out the next morning that my Thursday gym trip wouldn’t have been long enough to fit in arms anyway.

All of this sounds like the most trivial stuff as I write it out. How dumb to worry about it and waste so much mental effort on it when there is so much to be thankful for and so much worse in life that I could be dealing with. But it’s what the ED part of my brain latches onto (food/workout plans) and causes me to change them and move them around in my head like Sudoku numbers, trying out every possible combination to find something I can nitpick. Well screw you brain because as soon as I let go and just let life happen, it all worked out. Man that went in a rant direction I wasn’t planning!

I roasted up baby cabbages + white mushrooms in a mixture of Pomegranate Balsamic Vinegar and Blood Orange Olive Oil, both of which I got in cute little gift sets from C. Wonder last time I was in NYC. They lasted me until Wednesday night’s dinner and made my lunch salads especially amazing. I also tore out an easy recipe from Shape (or was it Self…I seriously can’t tell them apart) for a cold chickpea salad and made that. It was dominated on about a day.

Pre-roasting…I couldn’t believe how much the mushrooms shrunk up in the oven!

Of course Monday night I also caught an oven mitt on fire while try to reheat frozen fish from my last dinner at Pond House Grille. Yes you heard me right, a fire from reheating a frozen food item. So I made some strides in cooking and then a step back. I’ll get there.

5. I heard something on the radio this morning that infuriated me.

I listen to KISS 95.7 in the morning mostly for the music. The morning show hosts bother me, but every now and then I’ll tune in to the celebrity gossip (guilty as charged). But this morning was too much, and the last straw. I was horrified when one of the hosts claimed he had a “verified list” of exact weights of female celebrities, and then started reading off the list and asking questions like, “Who do you guys think weighs more, Kourtney Kardashian or Mary-Kate Olsen?” As I listened to him rattle off the numbers, I felt for all the girls out there listening who don’t know what I know now, who were probably comparing their weights to the weights of X or Y female celebrity, and promising themselves that they’d get down to that number too…one day. Many of the weights he read off were certainly not healthy weights for some of those celebrities (given their heights). I’m also sure that some of these women are short and yet there were probably girls out there listening and aspiring to weight that little despite being inches taller. I could go on forever but it just made me so angry that these people thought they had the right to be discussing these stars’ weights as those numbers defined them. That’s their weight and in all likelihood the facts weren’t even true. Just completely ludicrous and I plead to any girls (or men!) who were affected by that this morning, if you  heard it on the radio, to write off the idiots of Kiss In The Morning and just not listen to the show anymore. I know I won’t be.

Are you seeing anyone special this weekend?

What are you food prepping lately?

What do you think about what I heard on the radio this morning?