Red for me, white for Kelly. Bread for all!

Kelly adores New Zealand Sauv Blanc and was excited to see one on the extensive wine list. She later ordered a J. Lohr Riesling which we both adored. Not too sweet and I’ll definitely order it next time I’m at Bricco! I went with Borgianni Chianti. Kelly also tried – and disliked – her first olive. At least she went for it! 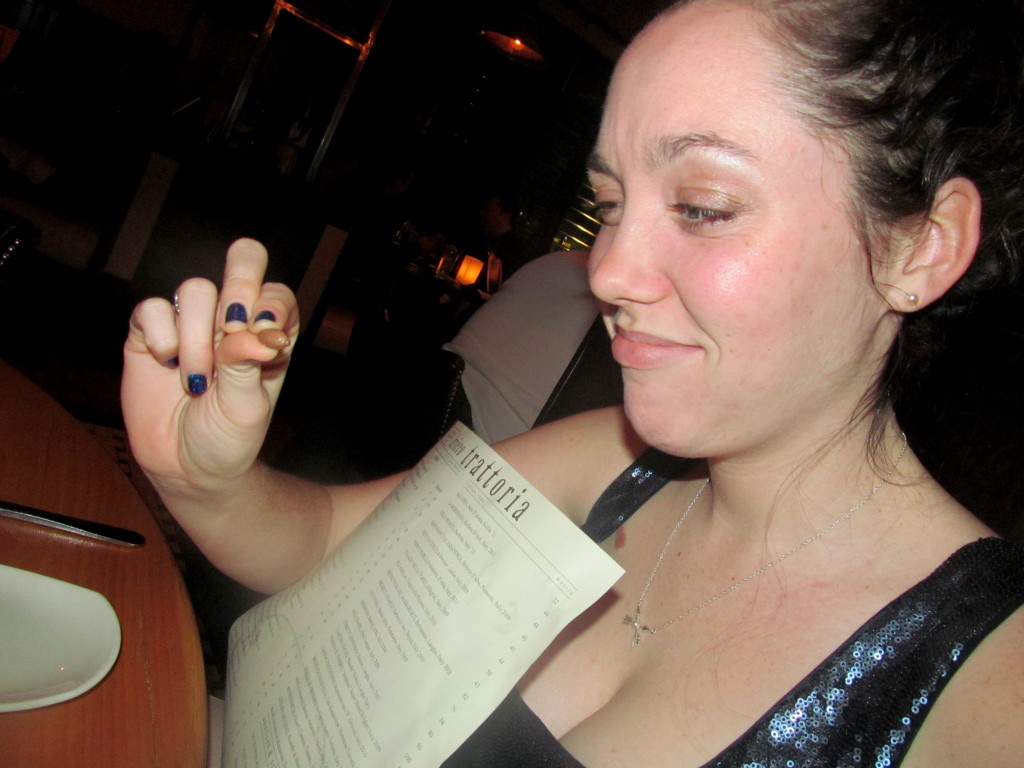 I kept dinner lighter so that I wouldn’t get too sleepy to go out afterward. As soon as I saw the kale salad on the menu, I knew that was what I wanted. Kelly and I also shared a grilled calamari app. I totally forgot to ask for the dressing on the side, so I guess that’s a good sign that I was enjoying myself in the moment too much to remember to do so! And they didn’t put too much dressing on there anyway.

I feel a bit bad for Kelly because I was a Negative Nancy for some portions of the evening. I kept hating on myself in my dress and I know from firsthand experience it’s annoying when someone else just won’t stop talking about how he or she doesn’t look good. I hadn’t worn the (rather form-fitting) dress since Halloween weekend and had it in my head that it just wouldn’t fit this time around when I put it on. But once I threw on my new Old Navy tights and a mint statement necklace, the look came together and I felt better in the outfit. I am thankful to Kelly for putting up with me. And bringing me Cupcake Prosecco as thanks for hosting her!

After dinner we headed up to Rooftop120; they were serving a few new champagnes and that pleased me greatly because I have already tried all the wines on their list 😛 The music was just okay…the DJ was a bit of a jerk on an ego trip and had an affinity for songs that all sounded like the same song. But I did partake in some dancing, of course! 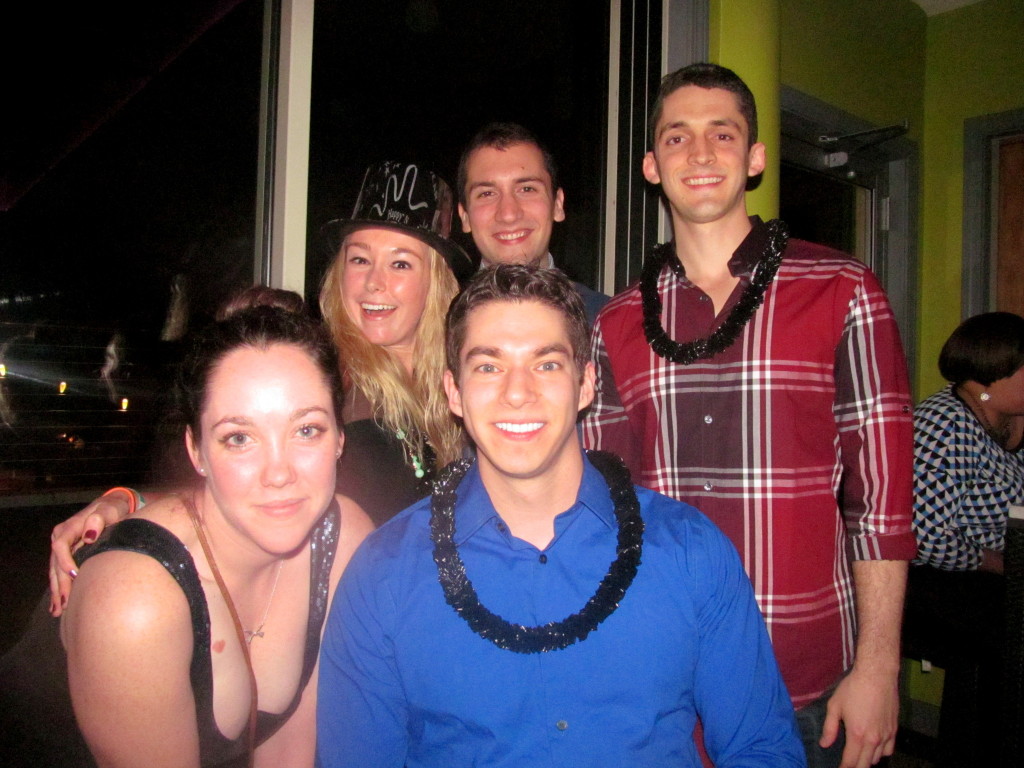 Rooftop handed out noise blowers, hats, and black leis for all. I can’t believe how fast midnight snuck up on me. I never imagined I’d want to stay out very long past 12AM yet ended up staying until last call! Must mean I was having fun 🙂 Before I knew it, we were counting down! Kelly was my New Year’s kiss, but she was also Greg’s. What a player!

I loved being reunited with so much of my standard “college group”. We got a great photo of the freshman-year-dorm friends. 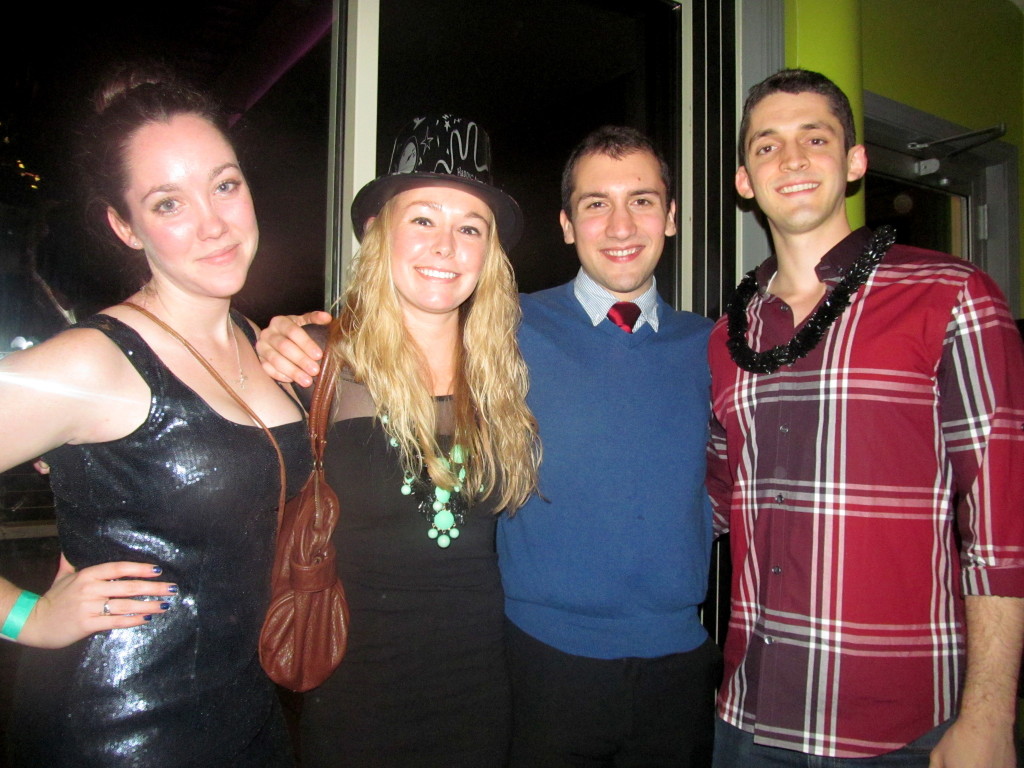 I definitely did not overdo it on drinks – I feel fine today – but certainly wasn’t comfortable driving home and never had planned on doing so. What I hadn’t planned on though was every single cab service having a busy signal. There were some panicked moments but at the end of the night we did find a safe ride home, for which I am very grateful! 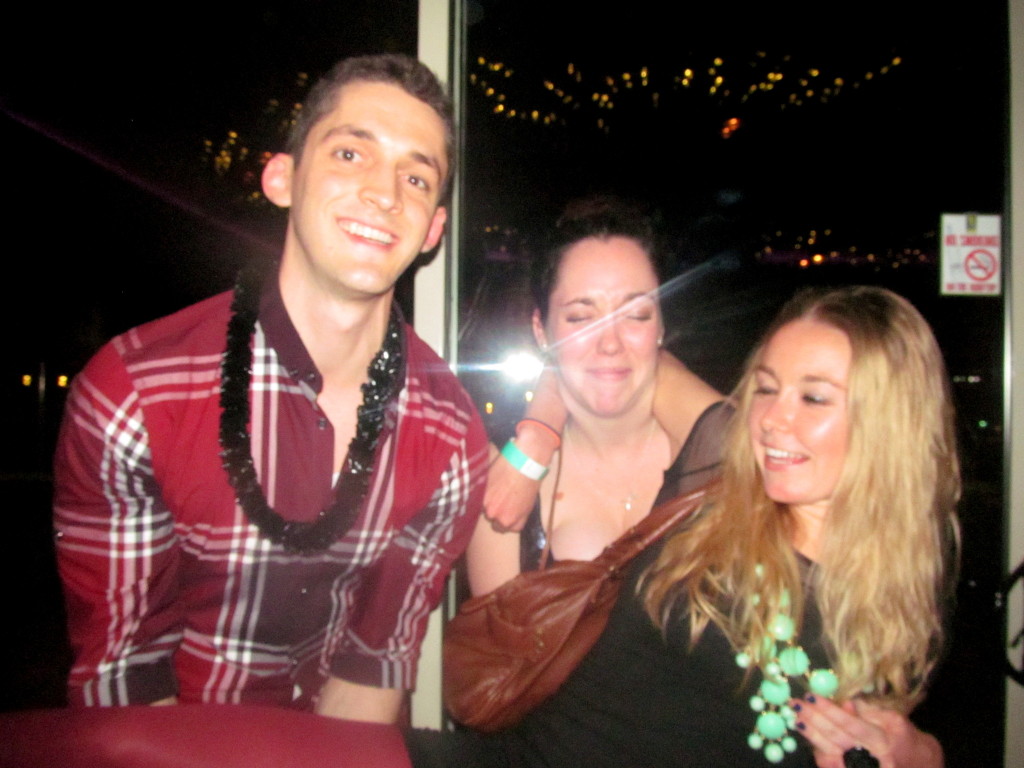 Take one, this resulted in me landing on the ground. 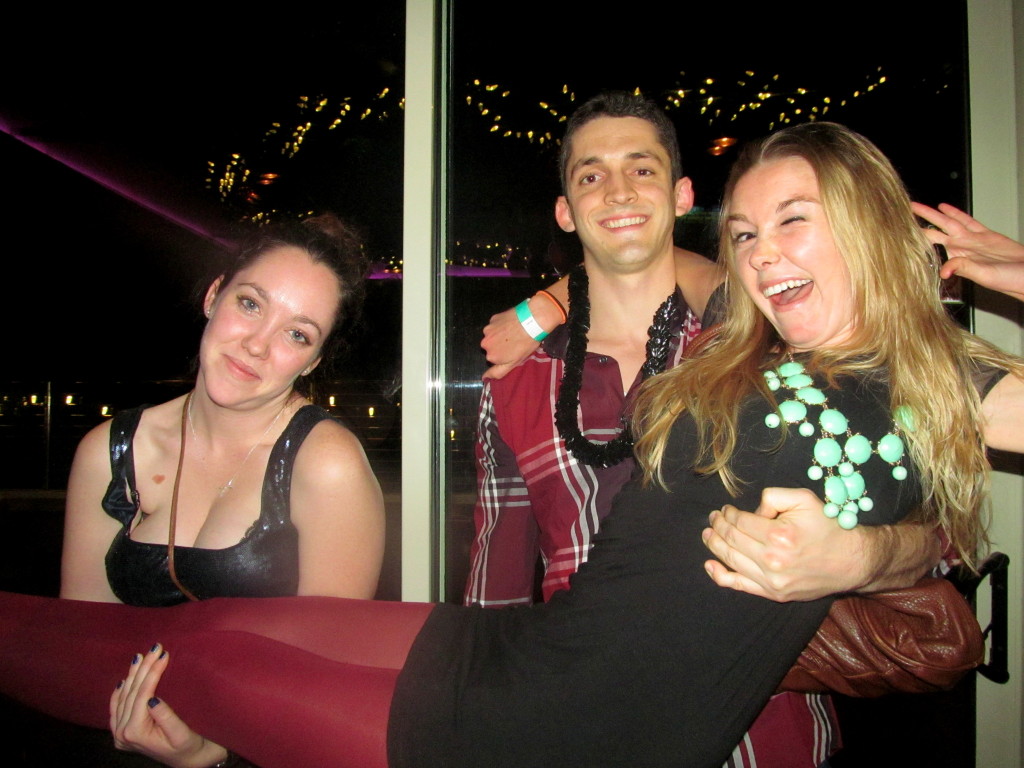 Take two, better aside from my obnoxious wink. Poor Kelly is barely tolerating this.

Once we got back to my house we had the drunk-munchies and I partook in hummus chips, veggies and Tribe Everything Hummus (IT’S EVERYTHING), black beans, and Heluva Good French Onion Dip. What an eclectic mix of snacks! Much of my hoping my 2014 isn’t like my New Year’s Eve comes from the post-snack guilt I have been feeling all day today. I honestly ate most of the bag of those chips and I hate that I know exactly how many calories were in it. But I also have to remember that light dinner and the fact that it was indeed 3AM and I’d probably feel hungover today if I hadn’t eaten them! I have been giving myself that pep talk all day. 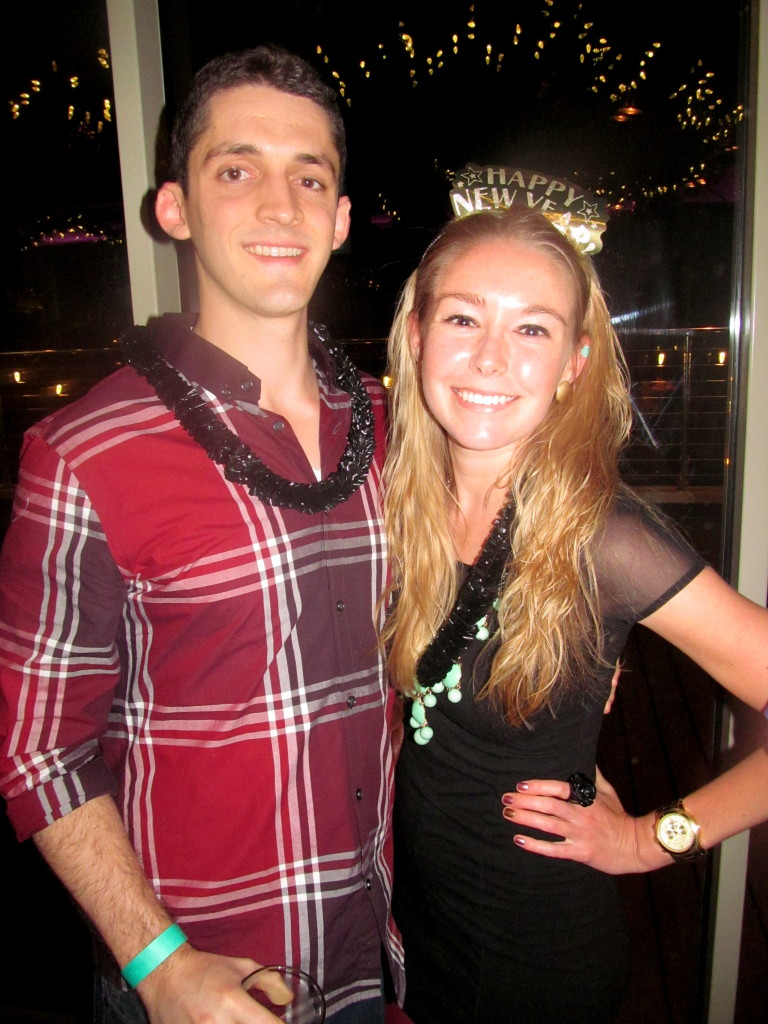 Greg, Kelly, and I crashed at mi casa.

But what matters also is the fact that I was too distracted by Greg and Kelly’s company as we hung out in my kitchen to count the chips, to pause and decide to put back the dip. I just was a normal girl at 3AM on New Year’s Eve, snacking with friends, laughing, and recounting the night. It was great. And that’s the part of New Year’s Eve I hope will be like my 2014! 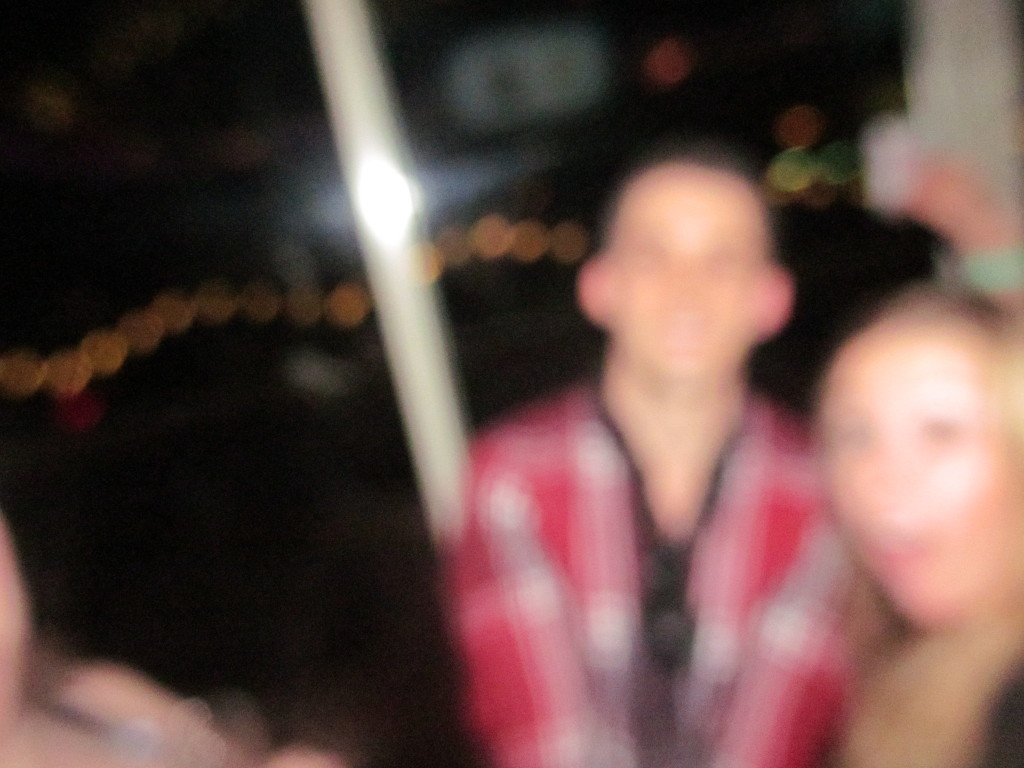 Maybe a bit more camera-focus in 2014 would be nice. 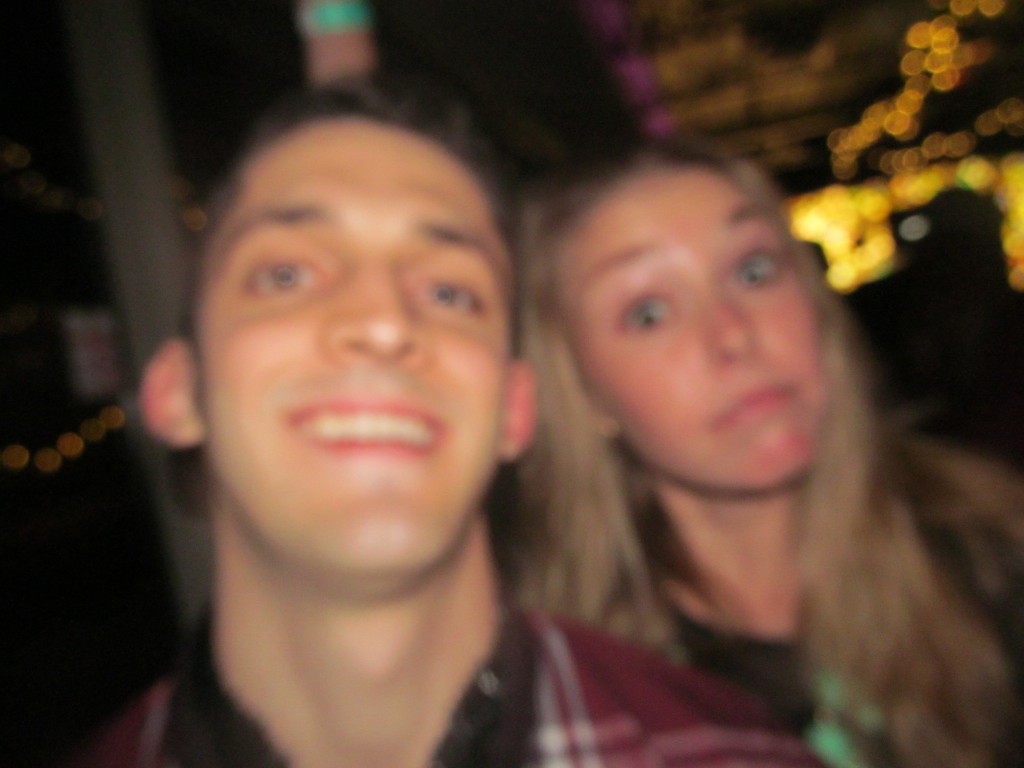 I will always take more selfies in 2014. 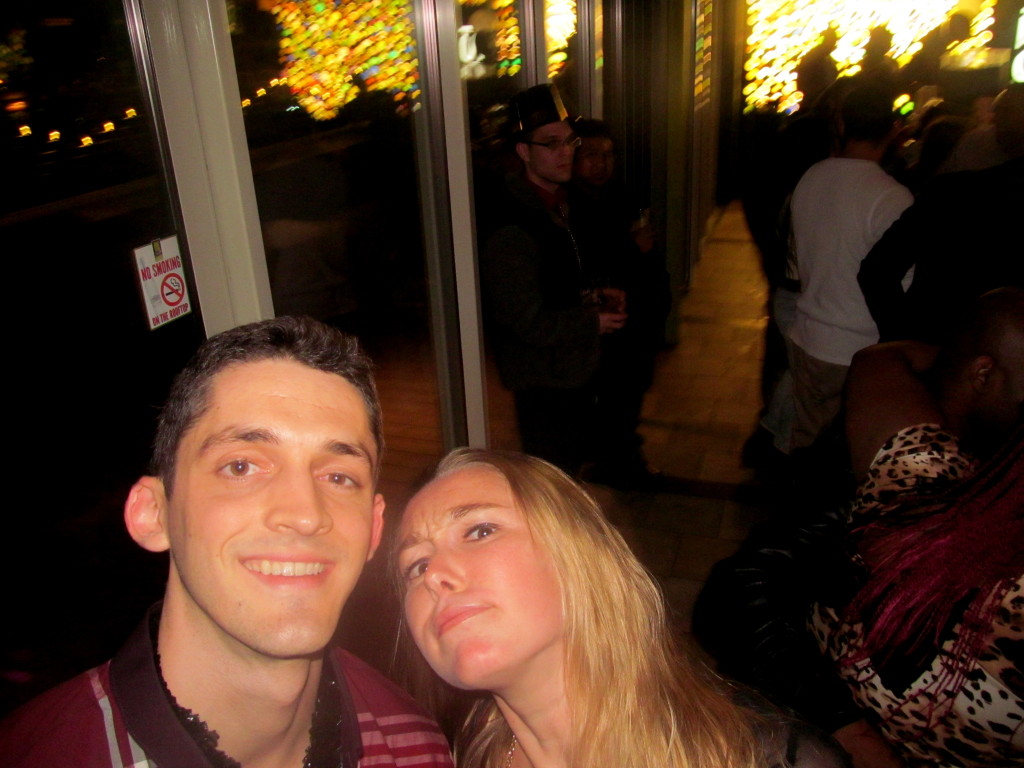 Perhaps I should take MORE selfies in 2014? New Year’s resolution?