I guess twice a week of posting is the best I’m gonna get this summer. Not that I won’t strive for more, but this season sure is busy. With my busy weekends I don’t have time to draft up posts on my days off! Oh well, fun fun fun, and I’m still posting as frequently as ever on Instagram. Let’s get this Five Things Friday show on the road.

Be sure to link up with Clare if you’re participating!

1. I ran 7 miles this week! Once again I got my long half marathon training run done on Tuesday and once again it went better than I thought it would. I stuck by the Charles River for most of the route and that made a huge difference. The gorgeous sights and “sea” breeze were helpful but most important was the presence of so many other runners. I really felt like a part of that Boston running “scene” and that motivated me to run strong and keep going! Really once I got to my halfway point and turned around, I knew I was home free because well…I have to get back home, right? The hardest part of my runs, I’ve found, is getting to a halfway point and turning around. But that makes the second half easier, so I’m going to try to stick with that type of route, instead of one that takes me on a circle of sorts.

I wore my pink and purple PUMA ensemble (the leggings too) and being so matchy-matchy definitely helped my run motivation!

2. I ended my long run in the best way – at a restaurant. I met a new Boston blend Emily at the BostInno State of Innovation networking reception (90+ Cellars provided the wine!) and we hit it off immediately. Obviously, given our shared affinity for booze, food, working out so we can have more of both of those things, and funky glasses. 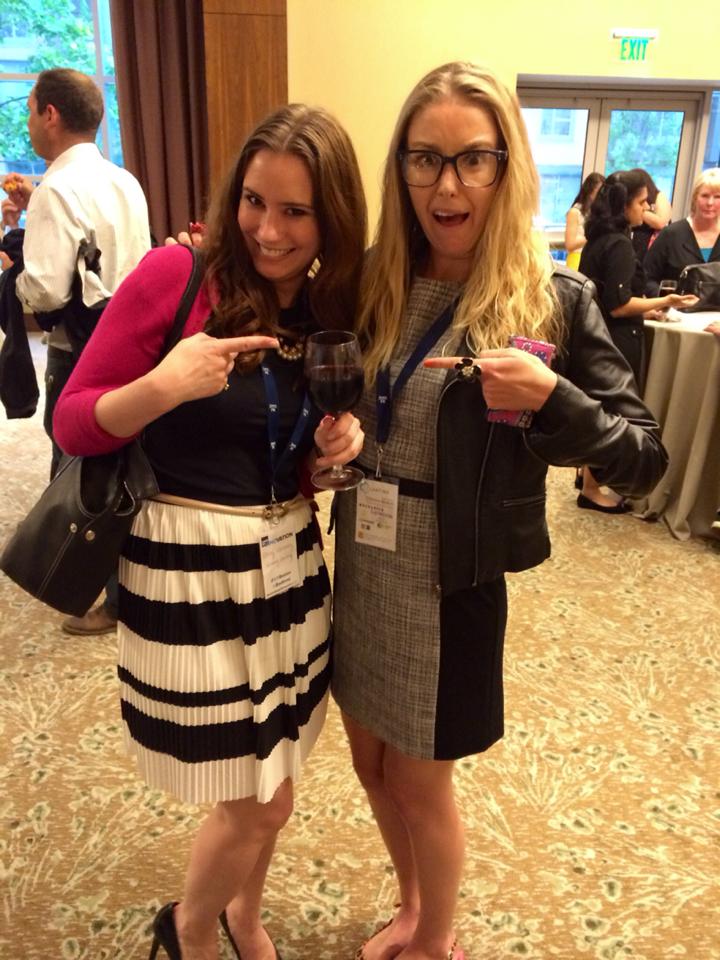 And we also enjoy making fun of cheesy bloggers-with-products poses.

We decided to get together for a lady date after Tuesday’s run, at a spot near me that I’ve been wanting to try called Hops N’ Scotch (located in Brookline’s Coolidge Corner). Plenty of great conversation – Emily is just as witty in person as she is on her blog – as well as delicious food and drink. We both started with cocktails – bourbon for me (duh) and gin for her. Her cocktail (below right) was a bit sweeter than we both would’ve liked, but mine (left) was PERFECT for me.

And then we shared a few plates, which is of course how I love trying any new place! My favorite by FAR were the pecan-stuffed bacon-wrapped dates. How appropriate for a blogger date!

I’d love to go back sometime and get an order of these alllll for me. (Source)

Emily really wanted the short rib sliders and at first I wasn’t really feelin’ it, but I’m glad we ended up ordering them because they were amazing, thanks to the presence of both jalapeno AND pickles. I feel like I rarely see sliders/sandwiches that come with both, but the salty and spicy made for a lovely combo. And the crispy fries really hit the spot after my run. Oh, we also ordered tofu with veggies. That was good but obviously the bacon wrapped and fried things were better. 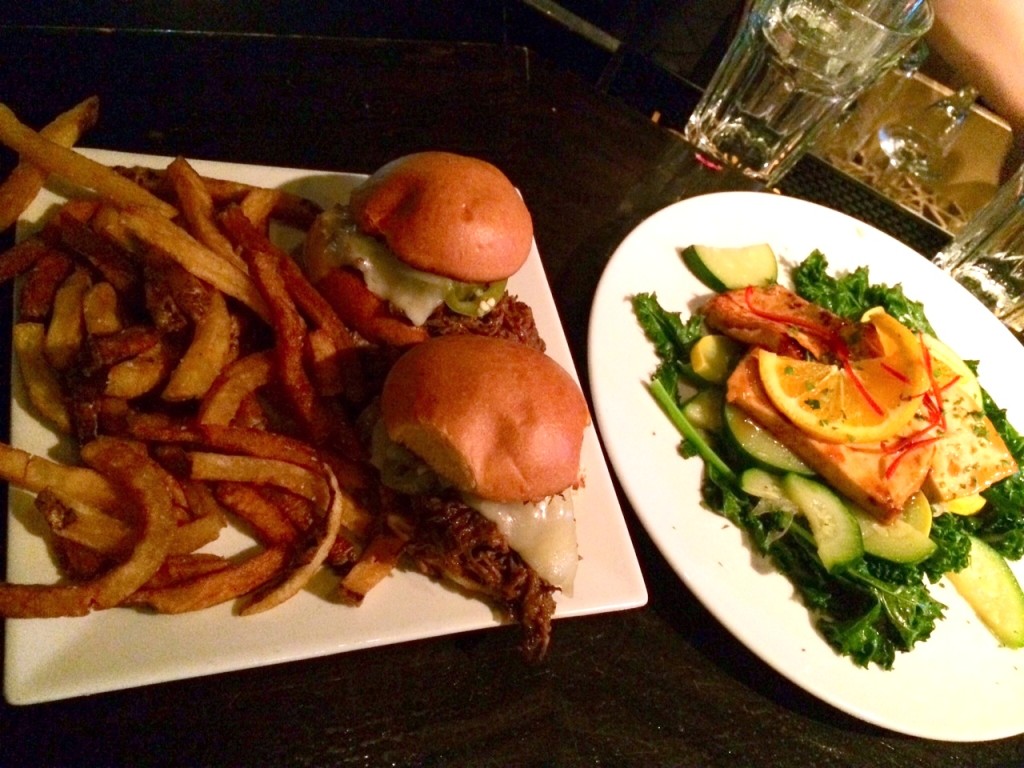 I appreciate the vegan option though, for so many of my Boston vegan friends!

3. Thursday morning’s short run did NOT go very well. But I’m quite certain I know why. The day after my 7 miler was Wednesday, aka Total Body Conditioning class day. And yeah, that was an awesome class. But I had a work event last night so I had to wake up to try to get my run in yesterday morning. Just a little over 12 hours after Total Body Conditioning – not gonna happen. I woke up with not only tired legs, but a growling stomach. Still I decided to just try to power through. Dumb decision. I only made it 2.25 miles, which isn’t too much shorter than my 3 so I’m gonna try not to beat myself up about it, but I learned a lesson I’ve had to re-learn in the past – fuel and rest are essential. My biggest struggle during this half marathon training is looking not like it’ll be getting the training in, but giving myself the fuel and rest I need. So I’ve had one good run this week and one very bad one. At least the good one was the long one, but I hope I don’t have another bad one soon.

4. Thursday night’s event went very well in terms of delectable food and wine. Not so well in terms of my body image and guilt during and after the fact. Someone made a comment at dinner that earlier during the wine tasting portion of the evening, I was “slamming the cheese”. I wasn’t even hungry at dinner so I ordered a small beet salad, and felt bad for eating it. Then I came home and wanted something sweet so I had granola. I feel sooo bloated this morning and I’m wearing jeans that first the first time in awhile, aren’t too big for me. It feels really really crappy. Last night was fun but dammit I feel like a blimp right now.

I retained my Pond House Grille summer cooking class cheese plate making skills and put together this beauty. Then promptly ate a ton of it.

Tasting crew (minus me).

5. But I DID wake up at 6:15AM for no reason this morning, and took advantage of that fact to go to my first November Project. My boss, Sarah, and Jon have all been pushing for me to “just show up” and I figured a morning I was awake for no reason, why not? So I donned the t-shirt I got last night (from Luiz of The Wine Hub) and headed out to push through some brutal hills on Brookline’s Summit Ave. What did I think? Well the leaders of the “tribe” are hilarious, and I loved the sense of community. I also really like how the workout is designed so that no one knows how many times any one runner has already run up and down the hills. Makes it way less competitive and intimidating! Some folks were also positioned at the top of the hill giving high fives. I don’t see how anyone could not feel motivated once they arrive at a November Project workout. Once you get there, there is just SO much in the atmosphere encouraging you to kill it.

Every person I met looked at me oddly when I put out my hand to shake hands – apparently everyone at November Project just hugs each other! The only thing I didn’t like about the experience was the way anyone I talked to insisted that I’d soon be ditching my favorite Monday spin and Wednesday Total Body Conditioning classes to come to the Monday/Wednesday November Projects too. And whenever I said that probably wouldn’t happen, I was brushed or shrugged off with an “Oh you’ll see”. I don’t think everyone who goes to November Project has to turn die-hard! And I would definitely like to come back on Fridays, but I really am not interested in any of the other days. Still, Friday mornings aren’t TOO early and are right in my backyard. With half marathon training, it makes sense to go back and get some running in.

OK, time to get mad work done…at work. Weekend is upon me. I’m gonna try not to think about all the plans I have because right now all they’re doing is stressing me out to the max. Hopefully I won’t feel so lard-like by the end of the day.

Can you relate to finding out-and-back long runs mentally easier than other route types?

What type of food tastes most satisfying to you after a long workout?

How do you push on when you wake up feeling like a tub-o-lard?

Have you ever tried November Project?