FULL DISCLOSURE: I was sponsored by New Balance and therefore received free gear, supplies, van rental, and Reach the Beach Relay admission. All opinions of my experience are my own and I did not receive monetary compensation for these posts.

In case you missed them, here is my Reach the Beach Relay announcement post and part 1 of my relay recap! When we last left off, I had consumed four glasses of wine at the pre-race dinner/party and woke up to my 5AM alarm on Friday morning…hating myself. I blame the not-so-good wine and a lack of sleep. 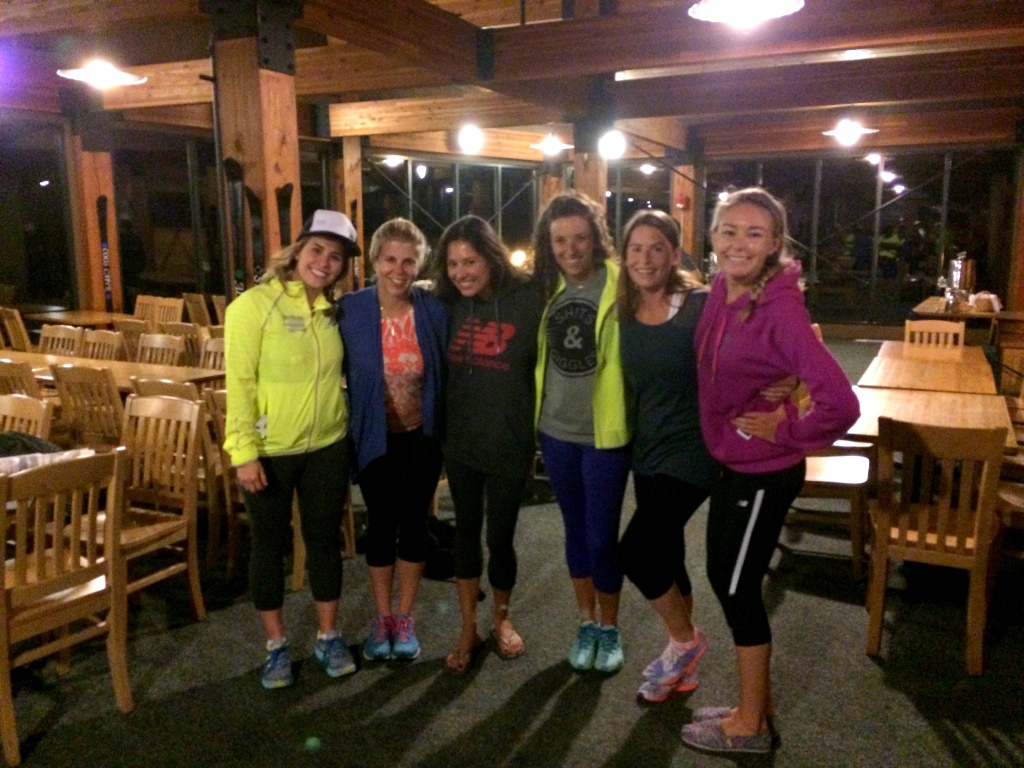 Last ones there…we shut the ski lodge down!

But it was my own fault and I sucked it up and drove Van 2, myself, and my van-mates to the start line as I’d promised! This was an advantage of being on a team of people that weren’t necessarily good friends or family – I wanted to put my best foot forward, make a great impression, and NOT make any excuses. With a team of people I knew really well, it would have been easier to make excuses or ask someone else to pick up my slack.

My Van 2 ladies – Lorraine, Melissa C, Melissa B, Allie, me, and Marissa!

We hit a couple of hiccups on the way to and at check-in that resulted in us starting a bit later than our 7AM start. The Santa running the safety check-in was very hardcore – he made NO exceptions and thought we were on the naughty list. Yes, I said there was a Santa at the safety check-in.

Once Van 1’s first runner Jess took off, Van 1 left to meet her at the first transition…and Van 2 drove to a breakfast spot close to the first van transition. We had a good amount of time to kill, and I used my restaurant-choosing skills (and Yelp) to select a winning spot in Glen, NH called Glen Junction. The New Hampshire quaintness continued…the restaurant featured a moving model train that circled around the dining room, and a train out front too.

See the train on the left? (Photo courtesy of Allie.)

I knew I had a lot of physical activity coming up and would have no time to eat a real lunch so even though I’m not normally a breakfast person, I ordered a good-sized meal that included my fear food group – carbs. Normally I would sub out one of or both carby sides (home fries and an English muffin) that came with my egg-white veggie omelet, but I kept both – and also had some of Marissa’s over-easy eggs, which were amaaazing atop the English muffin.

While I am glad I didn’t let fear stop me from eating my carbs (and they sure did make my hangover feel better), I regret eating a breakfast much bigger than what I am used to. I thought the hours I had til my first run would be enough for digestion, but not so much. Before I knew it we had seen off our first runner (the super-speedy Allie) at the first van transition spot, and were en route to the next transition so that she and I could make our exchange. 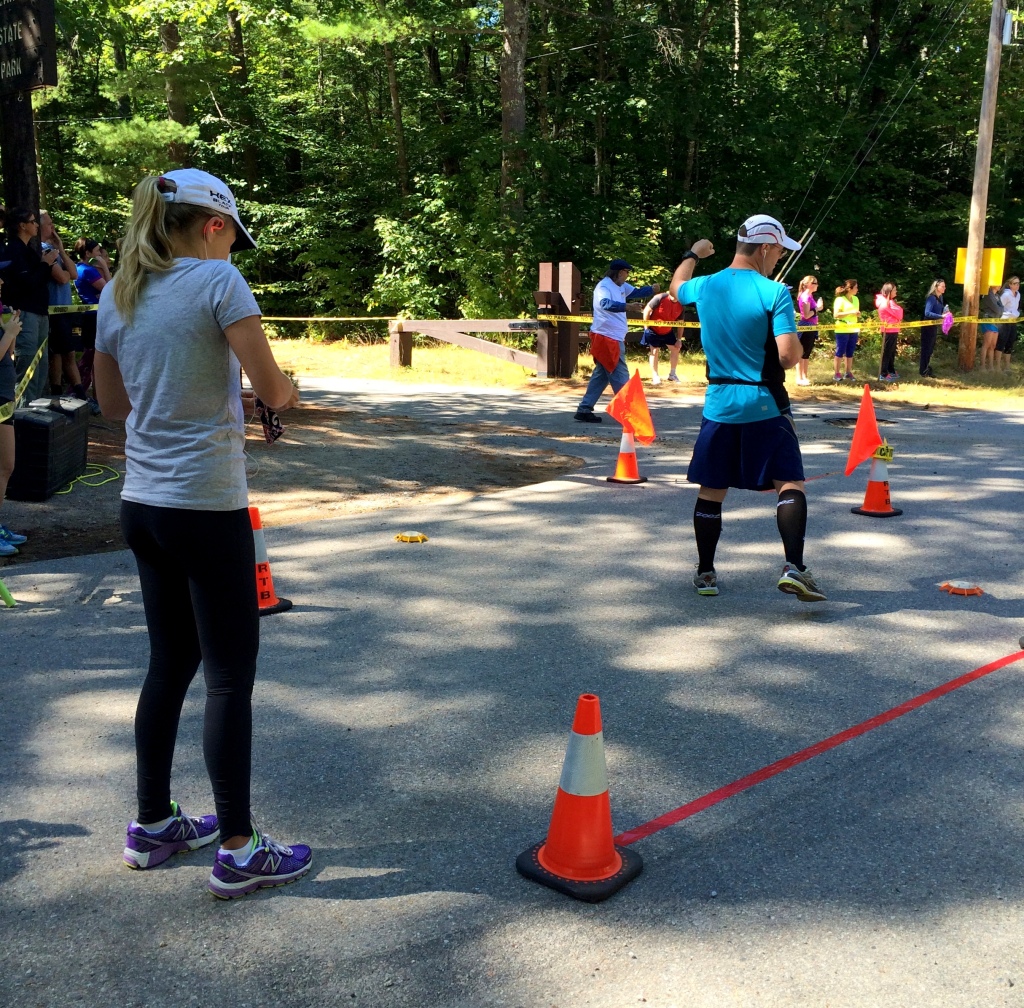 Waiting for Allie to arrive. 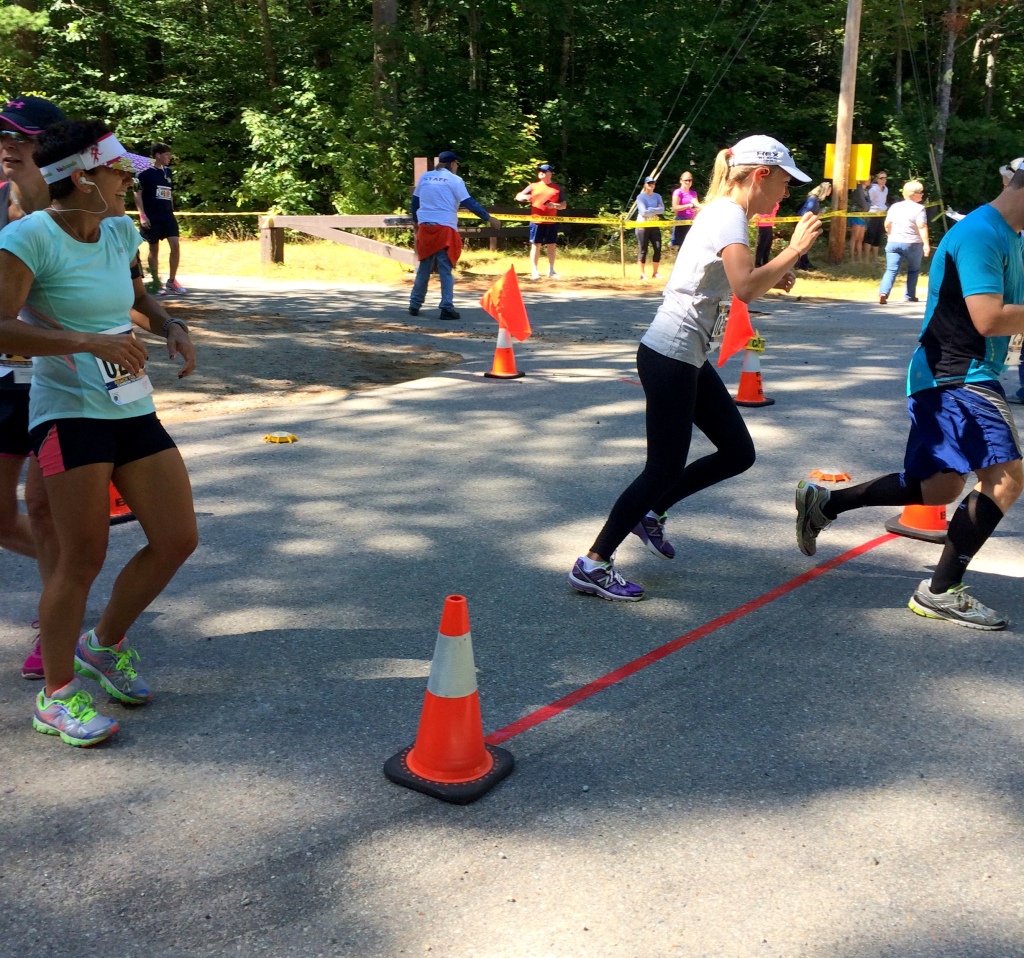 Starting out on the run I felt pretty good. It had really warmed up but I didn’t regret wearing my new leggings. New Balance also gifted us gear from the Anue Yoga line and I can genuinely say these are the most comfortable leggings I have EVER worn. Thanks to periodic shade throughout the leg, I never got TOO hot. These 6.6 miles were totally and completely flat – I really lucked out (thank you again Allie for switching with me!) and the worst part of the run, conditions-wise, was the nauseating smell of manure I encountered as I passed a huge farm. I didn’t stop to walk once – that was my goal and I met it. 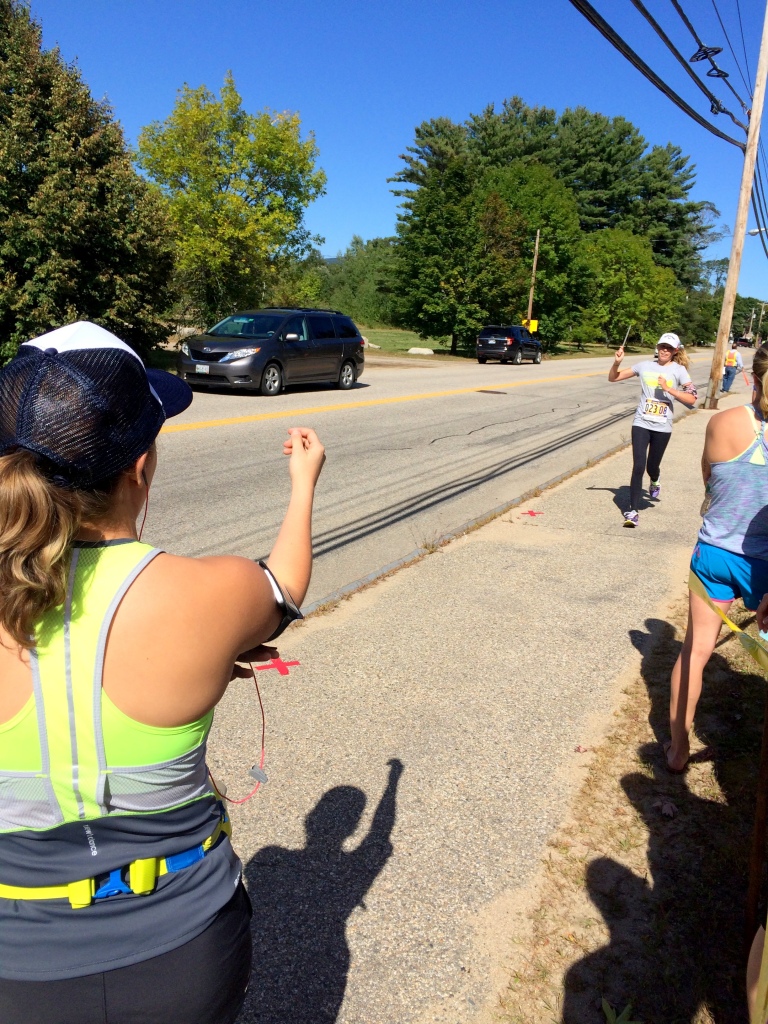 Coming in for the pass-off!

However about two miles into the run my stomach REALLY started bugging me. I felt as if I had a lead weight sitting in there – AKA breakfast. It was during this run that I realized I’d been eating way more animal products the last couple days than I am used to, and that also probably had something to do with the way I was feeling. I love meat, cheese, yogurt, etc, but I am used to only eating meat with dinner and only eating dairy once or twice a day. Between breakfast and three meals the day before that included both meat and cheese, I was not feeling so hot.

But I did it, I pushed through and handed off the “baton” AKA a slap bracelet (cool right?) to Marissa, and then we piled into the van to meet her and continue the run-meet-transition-repeat of the relay. My stomach continued to feel really nauseous and by late afternoon I still hadn’t eaten since my big breakfast, nor did I have the appetite to do so. But by dinner time even though I still had no appetite, I knew I needed to eat to get ready for what I was dreading…my night run.

Enjoying a brew with my fellow beer-during-a-relay drinker Marissa!

I picked out the dinner spot – Canoe in Center Harbor, NH – and despite the fact that the food was really great (and my decision to order a vegetarian meal), I still could barely stomach it. Honestly the only thing I consumed during dinner that made my stomach feel any better was a Czech-Style Pilsner! I felt a hot, anxious feeling welling up in my stomach and expanding up into my entire body as I sat there at the table thinking about my night run.

I had a feeling I wasn’t going to sleep, and felt like I was going to throw up. I had to take a moment to go into the bathroom, sit in a stall, and cry a bit. I couldn’t let the team down, but at the same time I really REALLY didn’t feel like I would be able to run 5.5 miles around 2AM. I texted my mom and she tried to support me from afar, but really I didn’t have much hope. I told myself to lay in the van and try to sleep for a few hours (I didn’t) and even if I had to walk the whole run, I was going to do it. I would finish it for my team.

That’s all for now. Leaving you all in “suspense” 😉

What works best for you – a big breakfast or something lighter?

Have you ever tried the New Balance yoga brand Anue?

Have you ever heard of anything more New Hampshire than a train diner, a Santa at a race safety check, or a restaurant called Canoe?