I received Bully Boy whiskey free of charge for purposes of making this recipe. My opinion of the product (I was already a fan!) is my own.

After inadvertently scheduling my good friend Rachel’s bridal shower on Derby Day, I decided to roll with the coincidence and make the shower Derby themed! 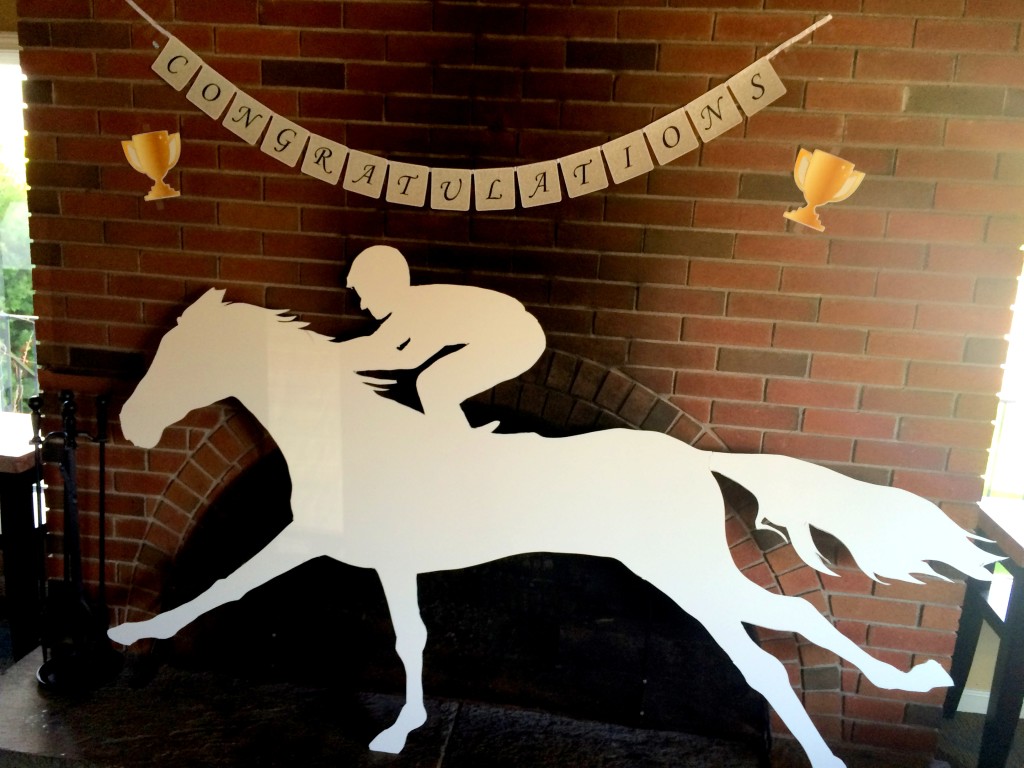 Rachel’s dad made that horse – isn’t it amazing?

Since I came back to CT from Boston to throw the shower, I brought some Boston-based beverages back with me. Of course wine came courtesy of 90+ Cellars… 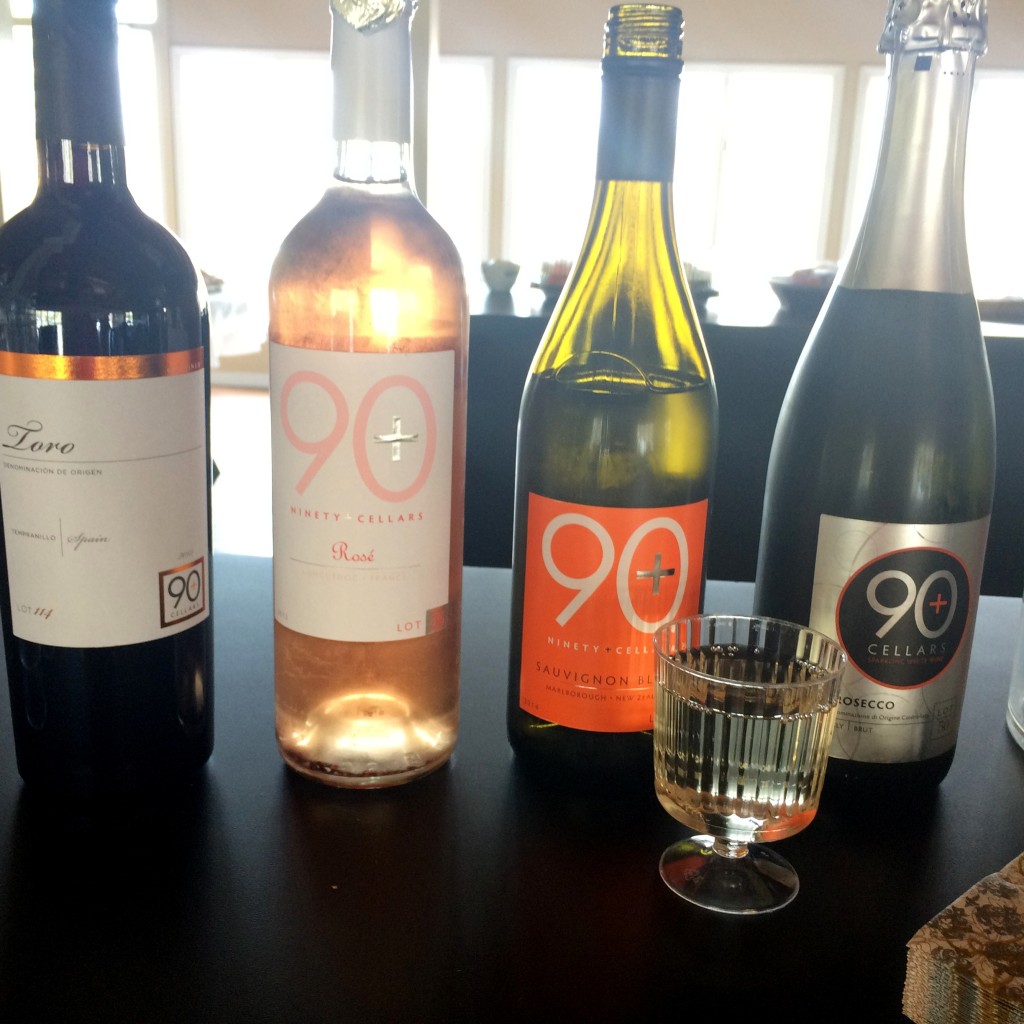 …and whiskey came courtesy of Bully Boy Distillers! I’ve tried both their White and American Straight Whiskies at various events, and often select the American Straight Whiskey for my Manhattans if I’m out at a restaurant and see Bully Boy behind the bar. I also chose it as the base for a big-batch Mint Julep – the perfect cocktail for a Derby Day themed bridal shower. 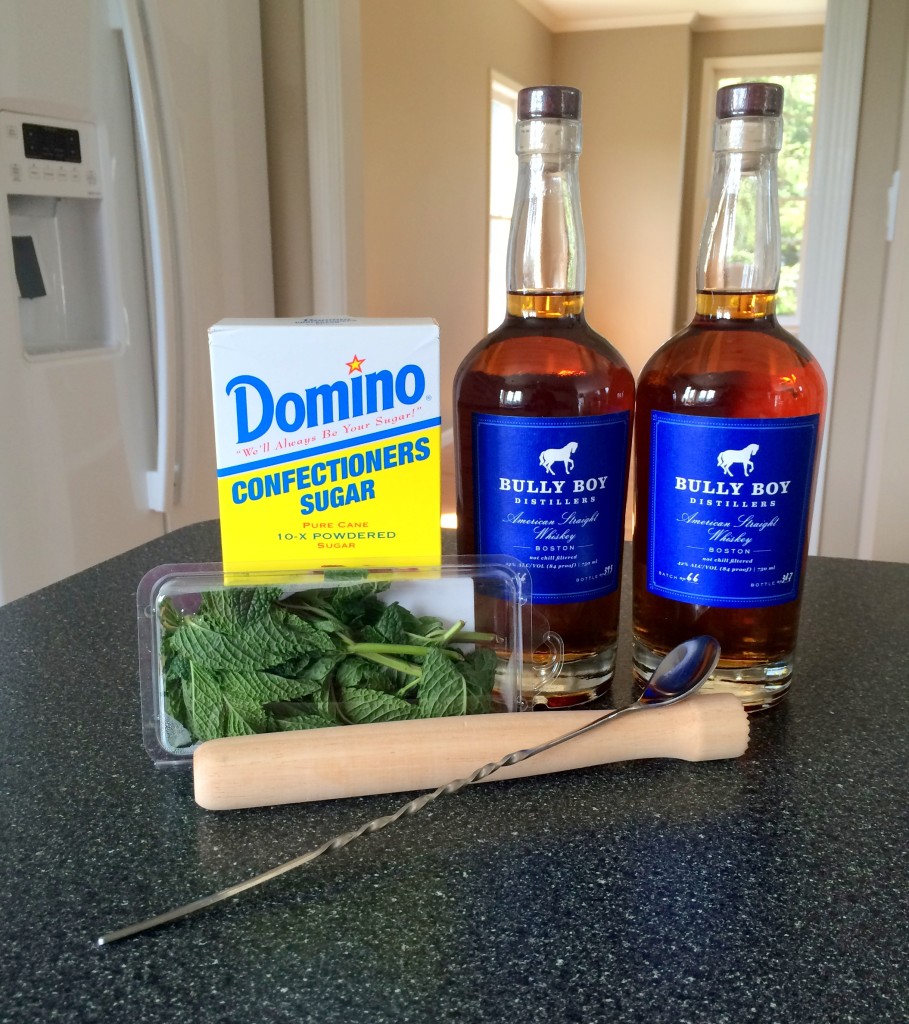 The ingredients for a Mint Julep are extremely simple – whiskey, sugar, mint, and water (not pictured, but you know what that looks like). Unfortunately I obtained the “wrong” type of sugar, and it didn’t dissolve too easily into the drink. It ended up working out just fine, but just so you all know, powdered sugar would have been a better touch. (I never said I was a bartender, or aspired to be one!) Anyway, you will also need a muddler, and having a long-stemmed stirring spoon doesn’t hurt either. 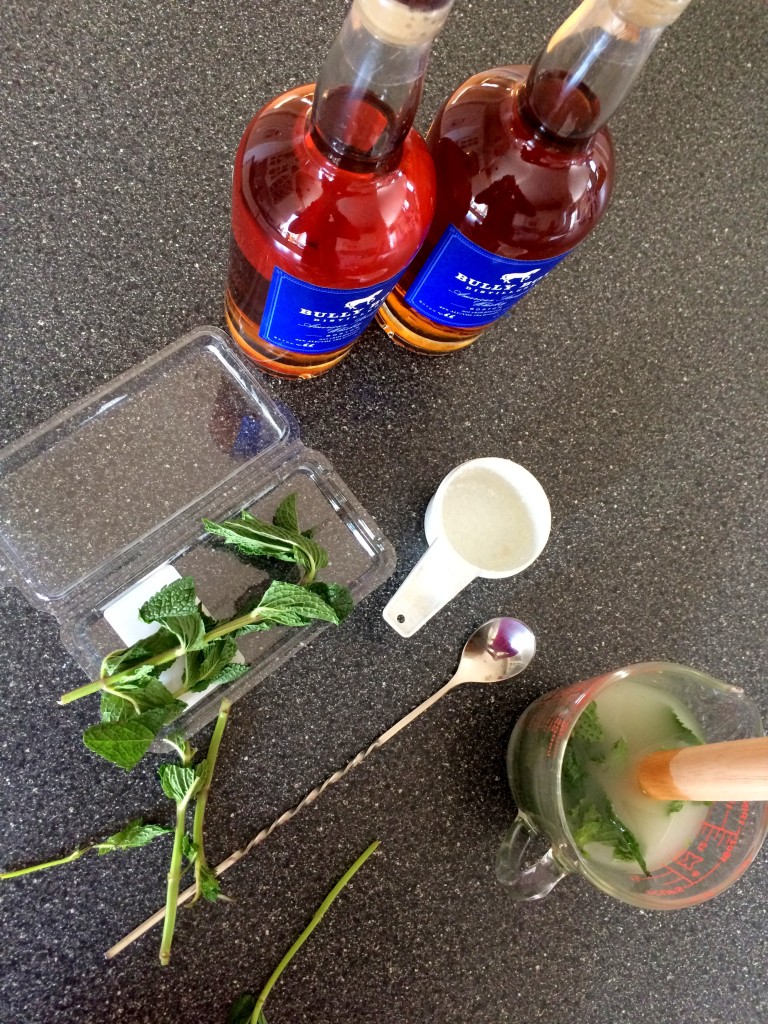 To make the big-batch Mint Julep, I just found a recipe on Wikipedia and converted the measurements in accordance with using two 750mL bottles of whiskey. But I ended up adding a little extra water and sugar to cut the whiskey – not because it’s not a quality product, but because even good whiskey’s got a burn, and not everyone enjoys that taste. My first attempt tasted just how I’d like a Mint Julep to taste, but I knew my audience was not in that camp, so that’s why I upped the water and sugar a bit. 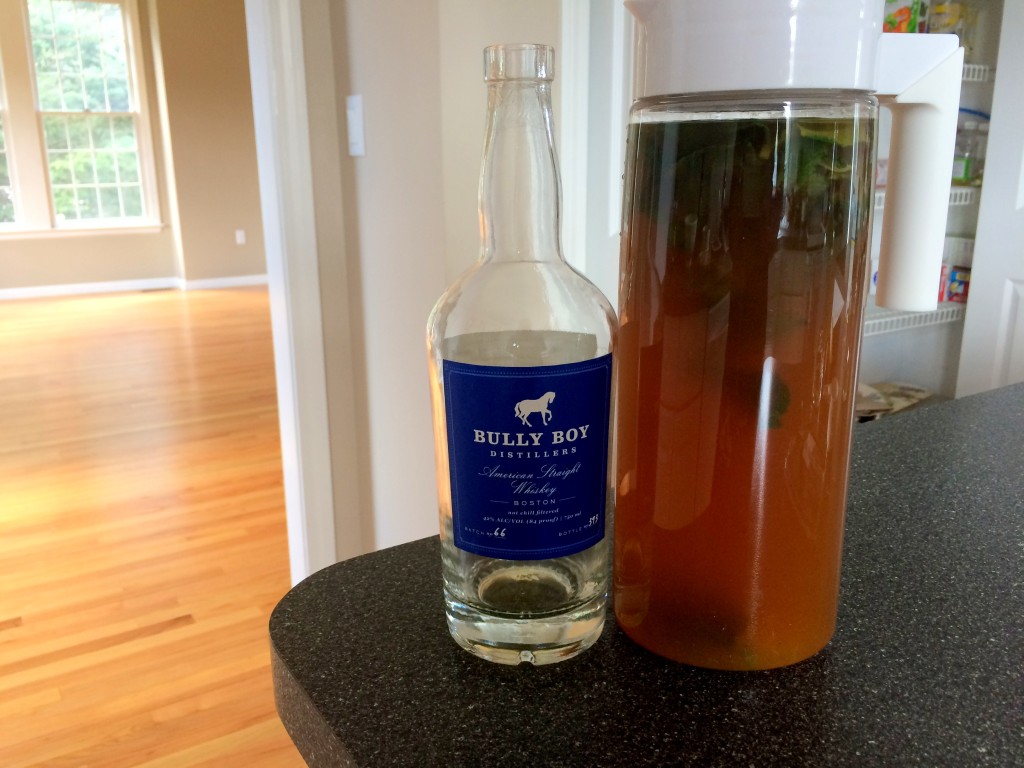 I made the cocktail a few hours before the bridal shower so that the mint would have time to “marinate” in the pitcher, but I’m sure if I had muddled it more, that would not have been necessary. 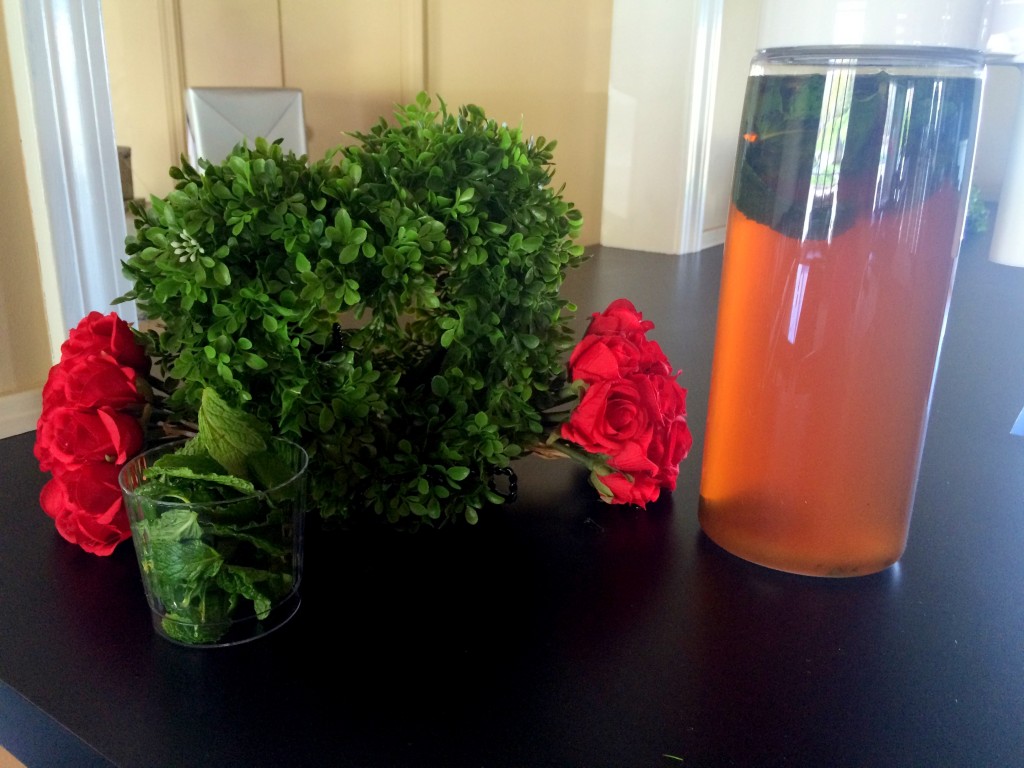 Rachel’s MIL did an excellent job on Derby decor!

I set up the Mint Julep in a bit of a BYO setup. First put the crushed ice into the cup, then pour the cocktail over the ice, then add mint for garnish. 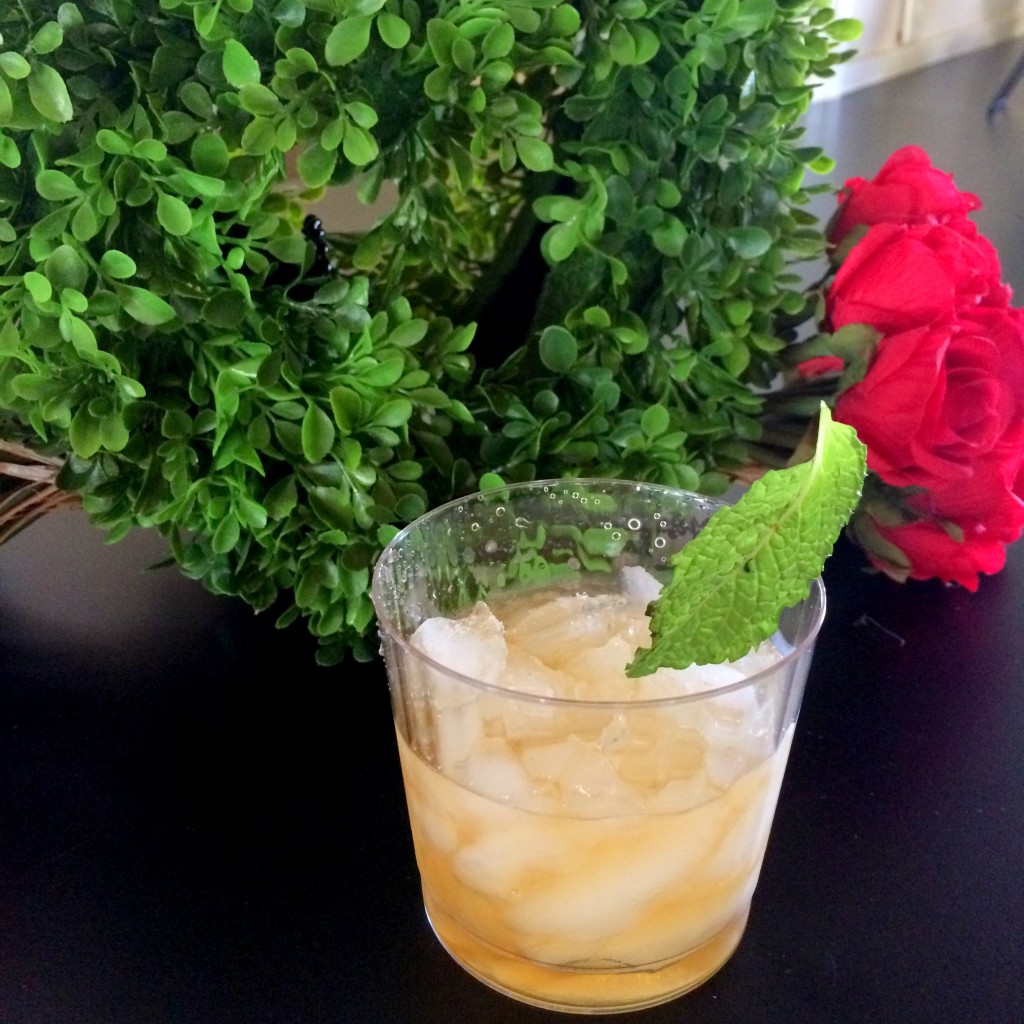 Though I did still get comments from some non-whiskey drinkers that the beverage was strong for their palates, the whiskey drinkers in the group (including me!) really enjoyed it. 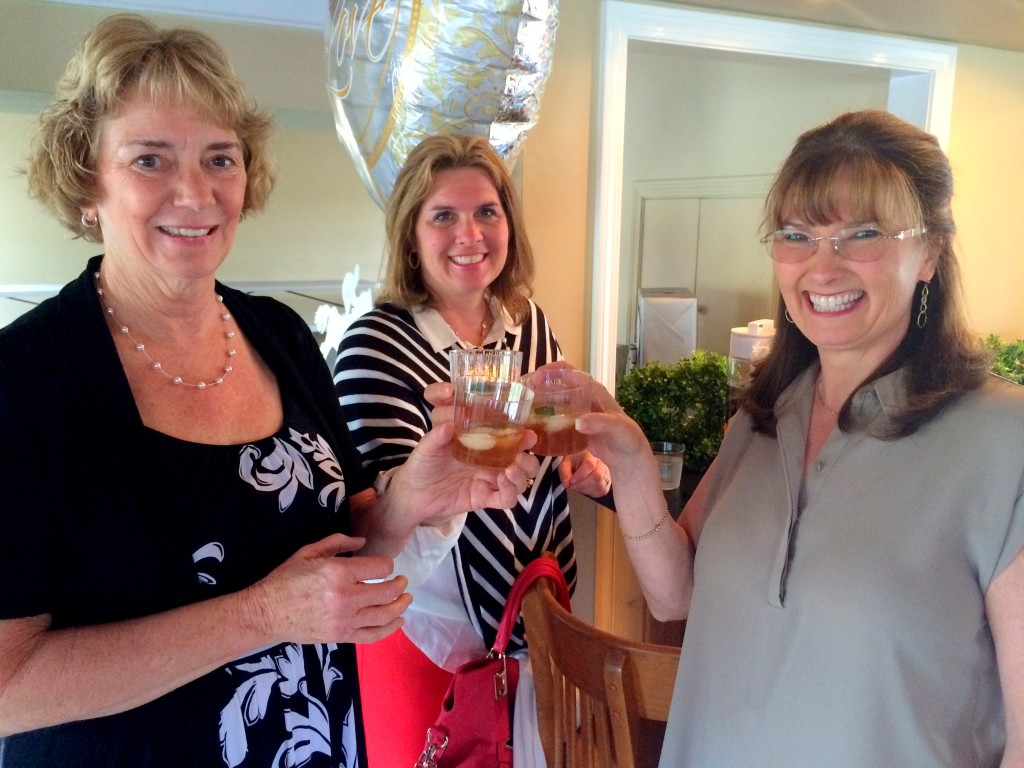 The groom also helped himself to some Mint Julep when he showed up. He and Rachel are both avid Manhattan lovers (they make their own at home!) so I’m glad I was able to make a fun whiskey-based cocktail for the shower, that also matched the theme. 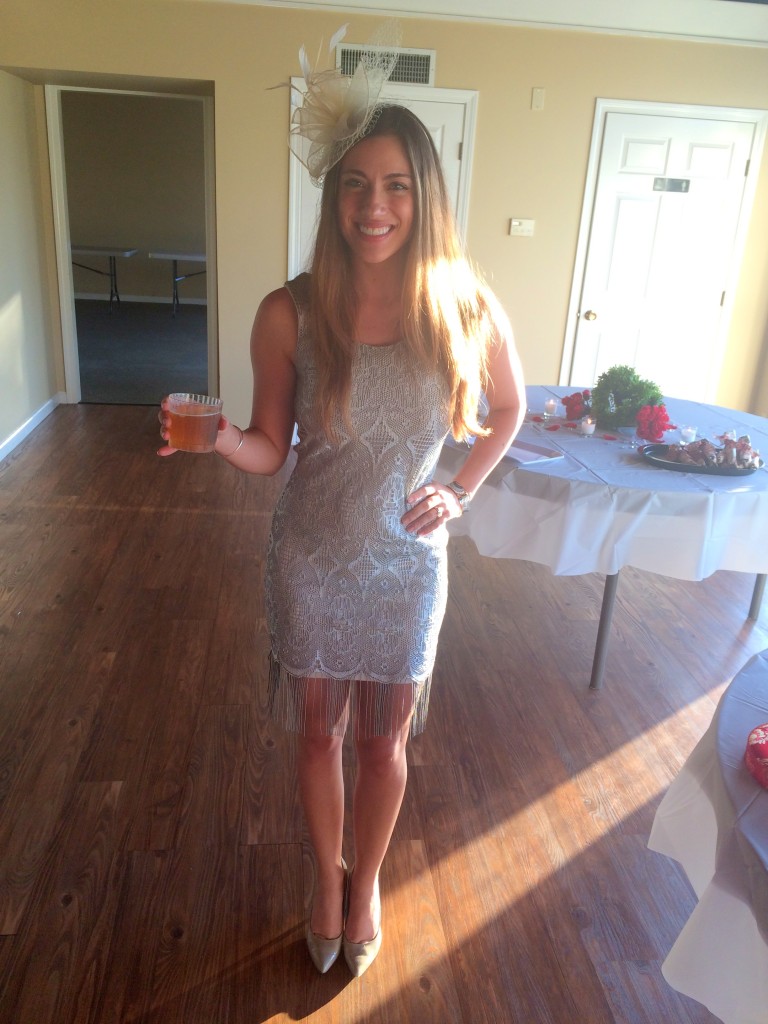 The lovely bride-to-be, with her Derby headwear and Mint Julep!

Despite this moderate cocktail success, I think I will still be sticking to letting skilled bartenders make my whiskey cocktails. Thankfully Bully Boy is available in Boston bars, so that won’t be a problem!

Thank you to Bully Boy Distillers for providing the whiskey for the bridal shower and Derby Day cocktail, and to Rachel and her guests for being my cocktail guinea pigs!

Have you ever made a big-batch cocktail for a party?

What did you do for the Kentucky Derby?