Never before have I watched so LITTLE of the Super Bowl. I usually pop into the TV room at our traditional gathering spot, the Gerber family’s house, to try and catch some ads. This year that didn’t even happen. 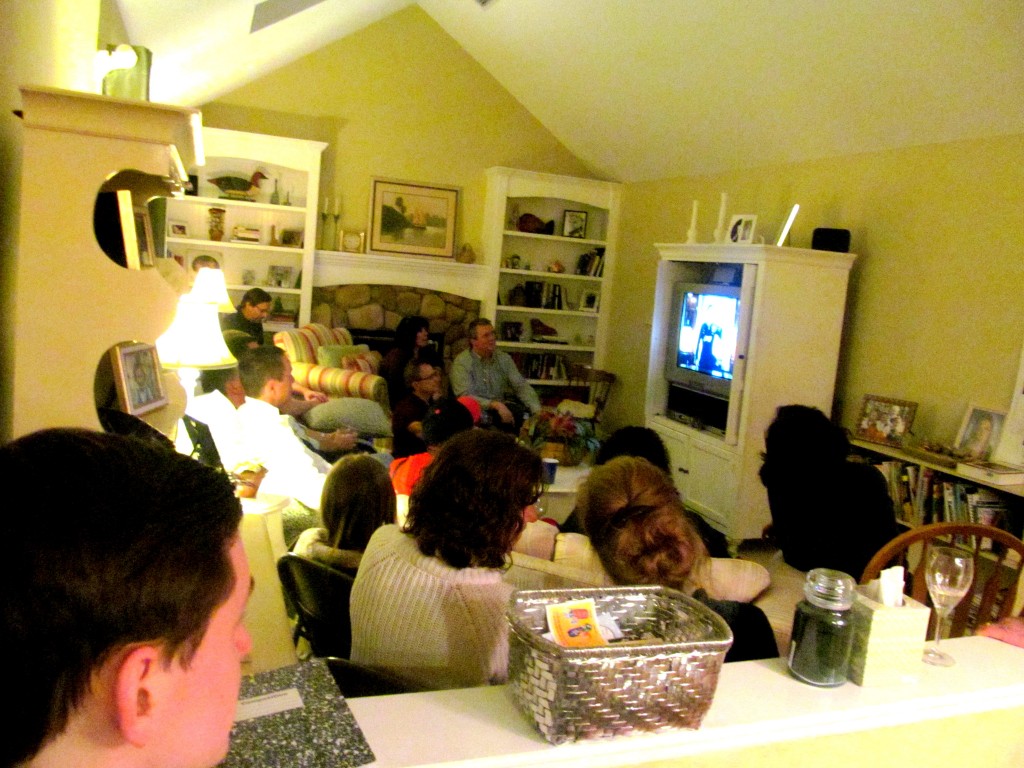 Aside from the halftime show (I think Beyone was hella fierce) I did not see a single second of the 2013 Super Bowl broadcast. I was too busy hanging out with family and friends, and tasting some fabulous food and drink. Seeing as it’s What I Ate Wednesday (thanks Jenn of Peas & Crayons for hosting!), today’s post is going to be heavy on both of those things!

Firstly, if you have a moment, please head over to my darling blend Rachel’s blog, Healthy Chicks, and check out the vlog she published on Super Bowl Sunday. The timing could not have been better on a day that, much like Thanksgiving,  has a stigma of leading to “over-indulgence”. Rachel’s vlog contains the exact philosophy I tried to embrace this past Sunday as I headed to an event that I knew would be filled with food outside of my comfort zone, as well as temptation to have more than my usual one or two glasses of Sunday evening wine. After all, I had made a promise to myself at the start of the weekend to check my ego at the door and enjoy! 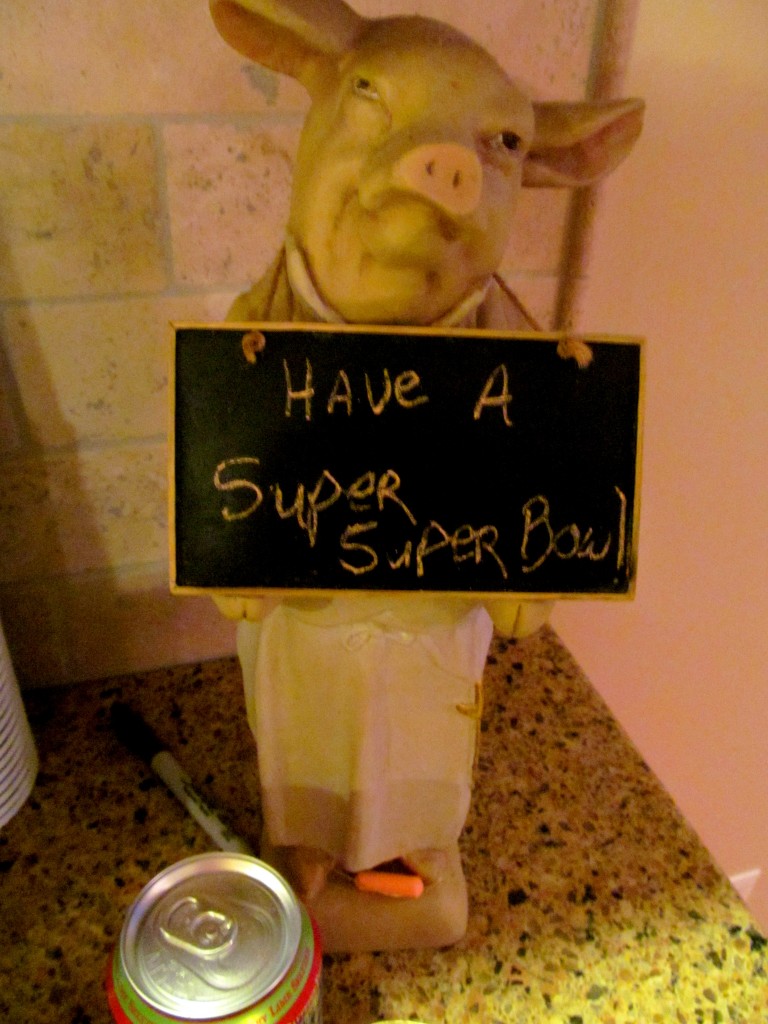 Inspiration for this post’s title.

In terms of drinks, plenty of different varieties of wine were available for sippin’. I decided to go for small glasses because there were several options I wanted to partake in. A little Gabbiano Chianti, pinot noir, and Southern Tier Mokah (chocolate & coffee stout) were enjoyed as the evening progressed. 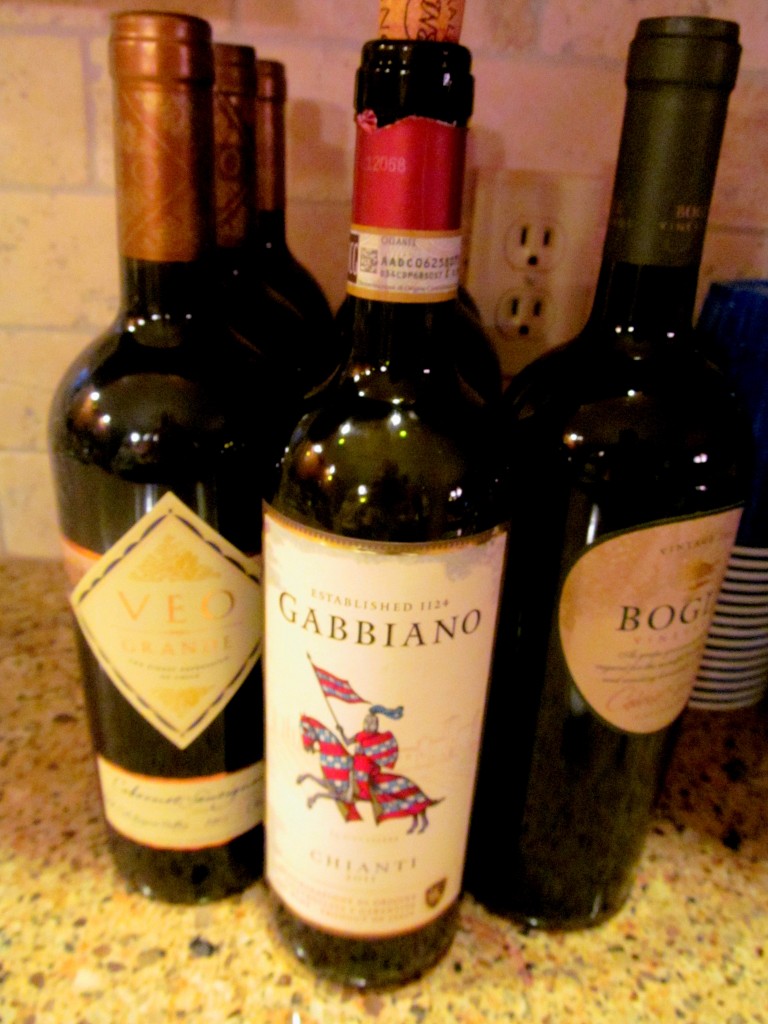 Bogle Cabernet Sauvignon (right) was a recent recommendation to me from a co-worker. I’m picky with Cabs and I really like it – and it’s affordable! Just an FYI. 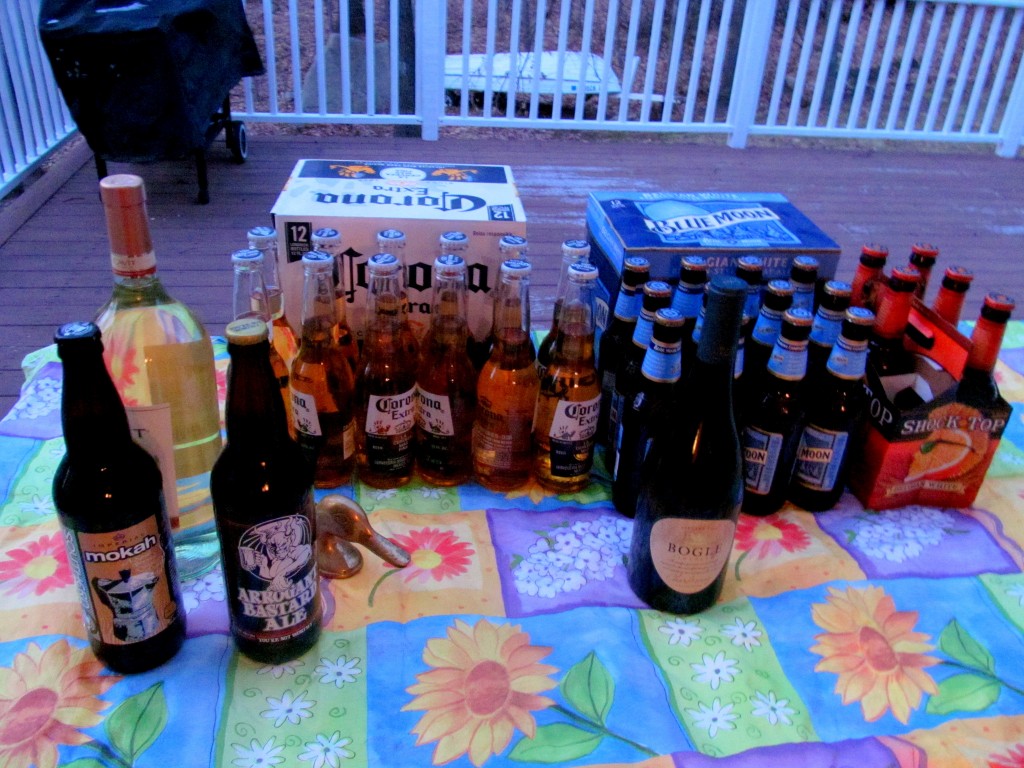 I also tried some of the Arrogant Bastard Ale, just because well, I had to. Too bitter for me!

By far my favorite drink (aside from the water I was sure to have between alcoholic drinks, thank you very much for leaving me feeling good this morning) was this delicious rum brought by the always-fun Mr. Pereda. You can bet I drank it straight. 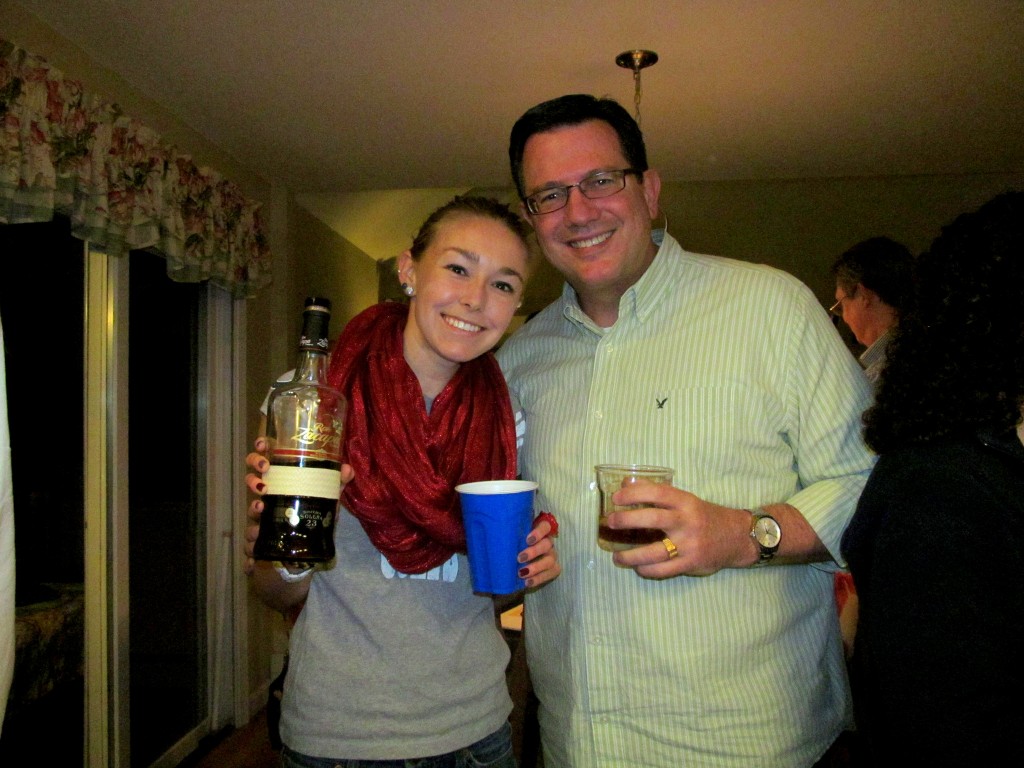 And the food…oh geez, the food. SO. MUCH. FOOD. Last year I actually ended up having to leave the party before I was ready to because the sheer amount of food was overwhelming to me and I felt as if I was bound to lose control and overeat. I did SO much better this year. I trusted in myself and while I did end up leaving the party having eaten foods I don’t eat on a regular basis and was nervous about that, I did NOT leave over-full and proved to my ego that I can control the present moment and that future-tripping about potentially going crazy on the food was a waste of time. 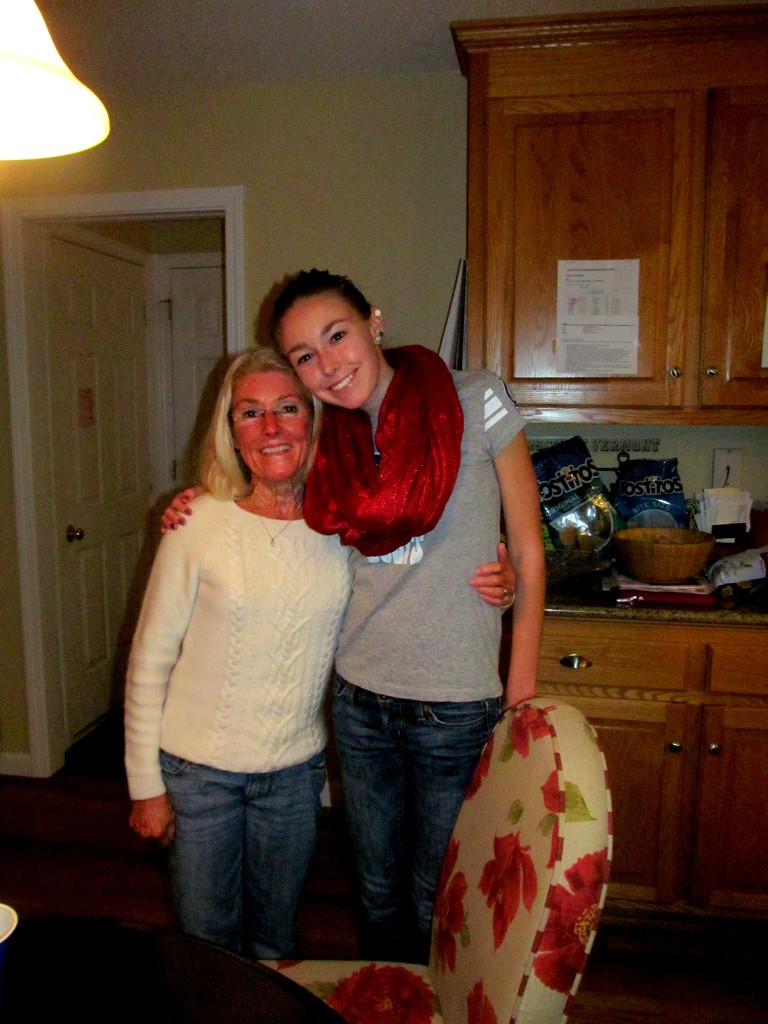 Yes, I was future-tripping before the party. But as the evening pressed on and I noticed myself naturally NOT obsessing over the food in front of me (in fact at one point I realized the plate I’d made up 30 minutes prior was sitting abandoned on the counter because I’d gotten so wrapped up in a conversation), I felt more and more confident that my inner guide was showing me what I really cared about most. 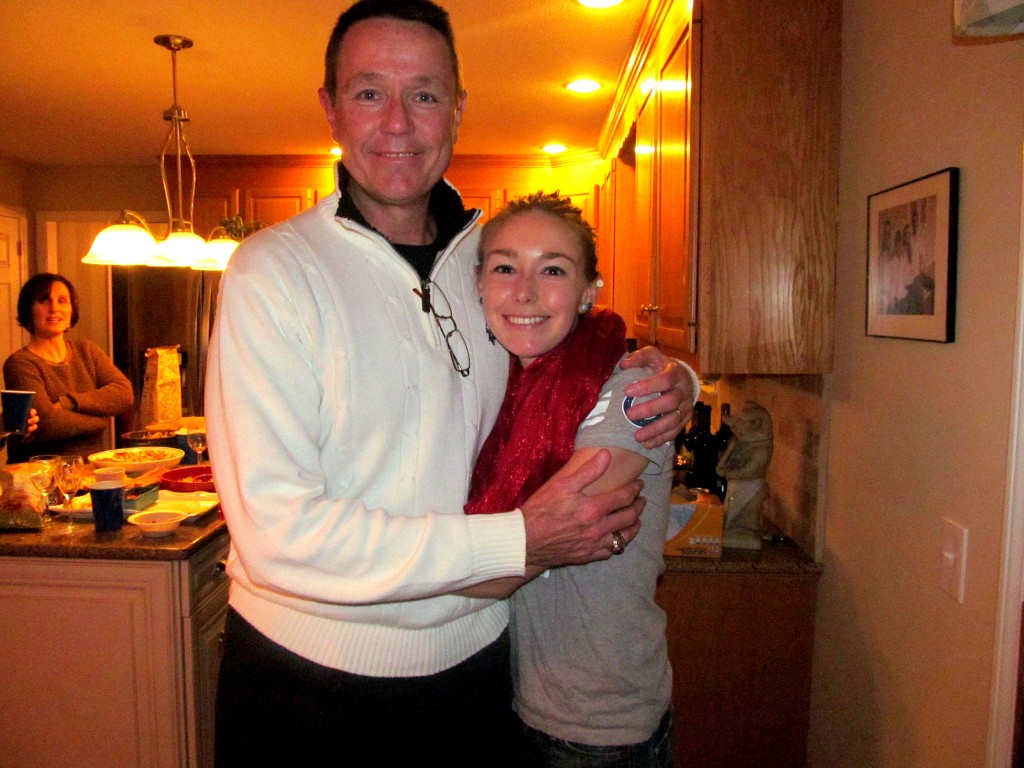 But yes, I tried a little of almost everything. I knew after all that if I didn’t allow myself to sample any particular dish because of labels like “bad” or “unhealthy” that my mind tended to auto-attach to it, I would not be able to stop thinking about it. So I sampled, satisfied, and moved on. 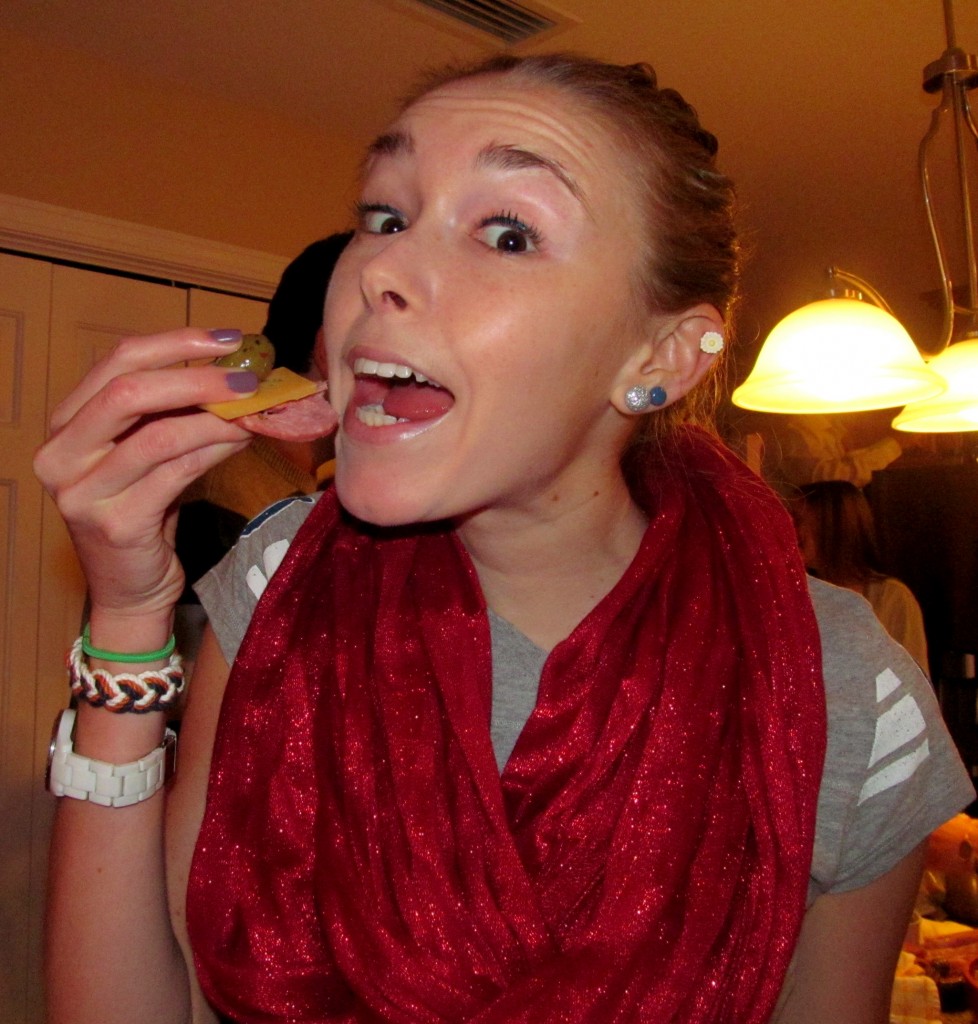 Showing off an olive-cheese-sausage tower. (By the way, a discount code for that Captain Jabbo bracelet I’m wearing is still available here.)

Okay, enough words. This isn’t What I Said Wednesday – bring on the food. 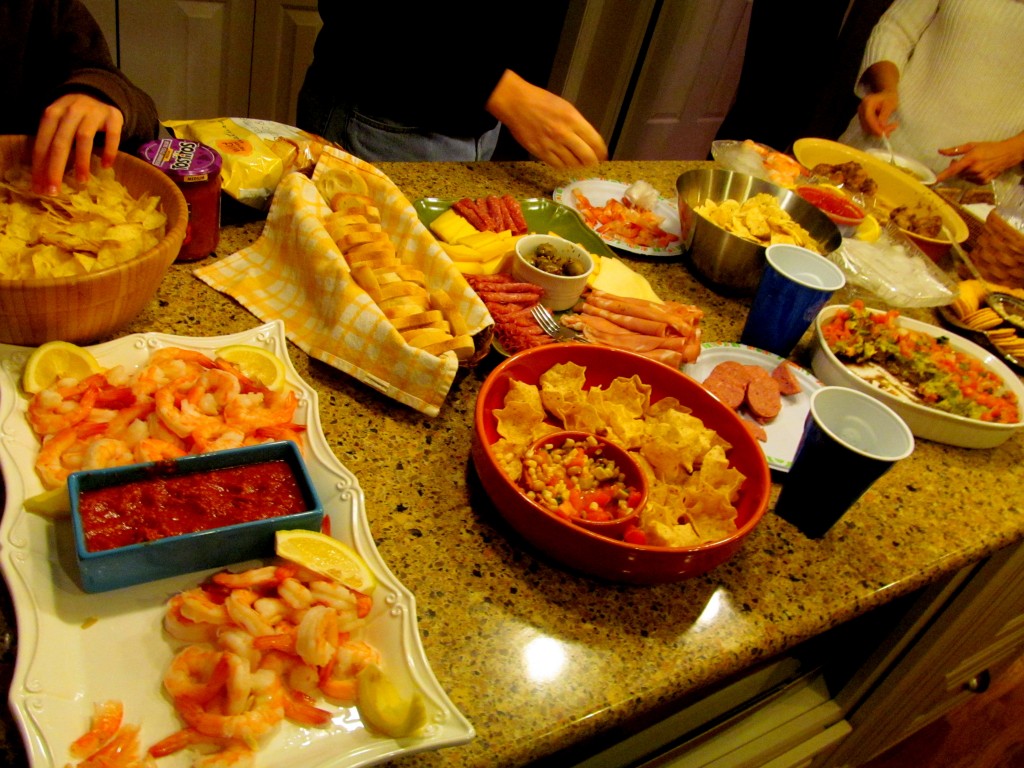 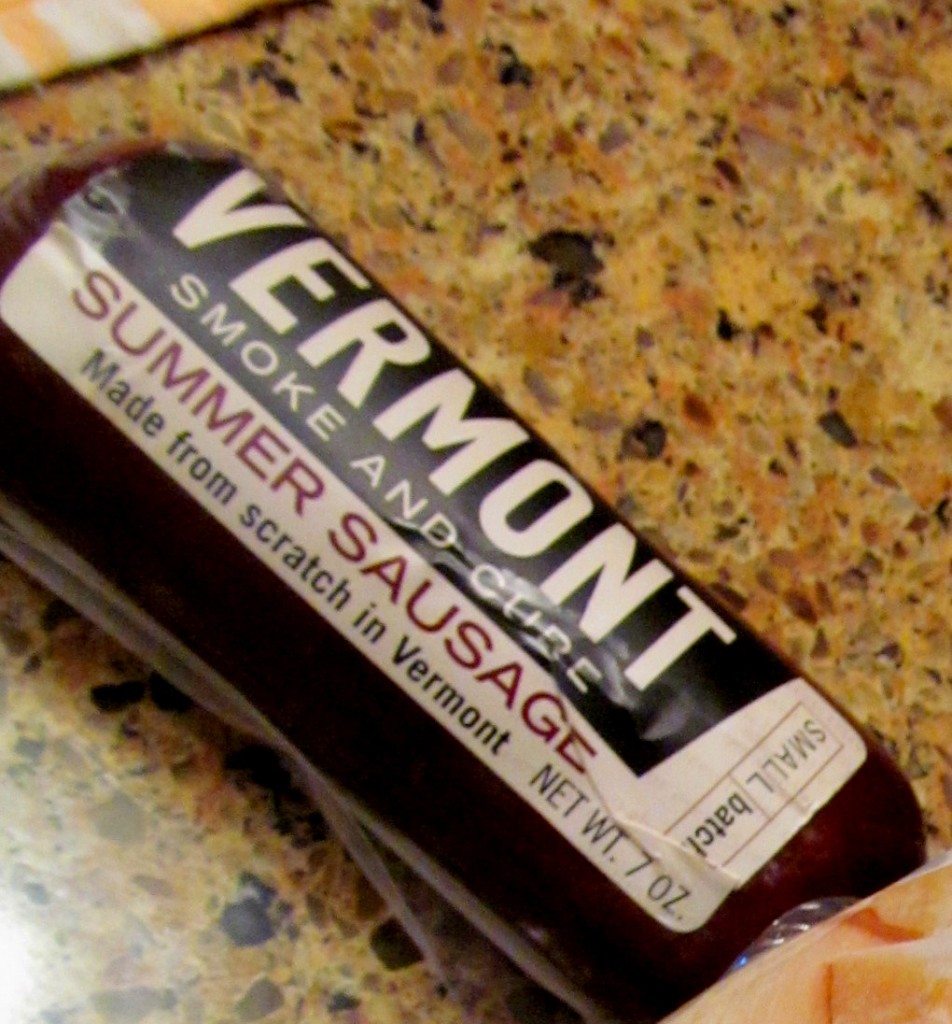 I shared the wealth by bringing with me this Vermont Smoke & Cure Summer Sausage from my Sun WineFest swag bag. It was incredible with the rest of the cheese/meat plate contents (see olive/cheese/sausage nom pic above). 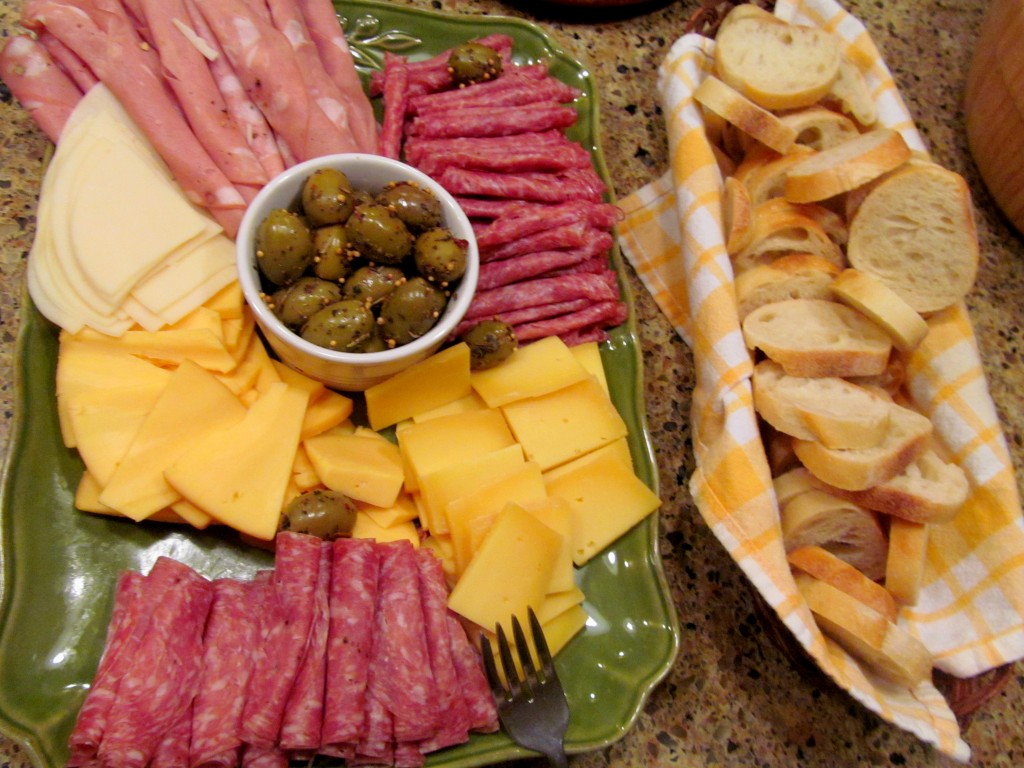 Cheese, meat, and olives are so dear to me. 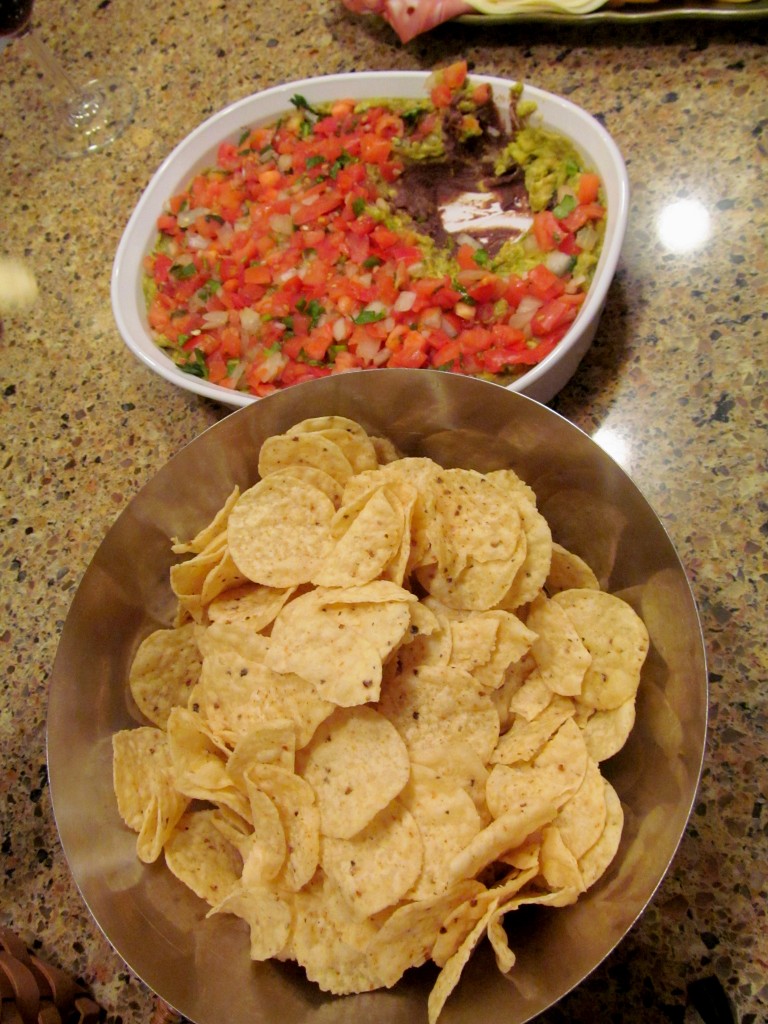 My mom hit it out of the park with her Mexican layer dip: refried black beans, guac, and pico. 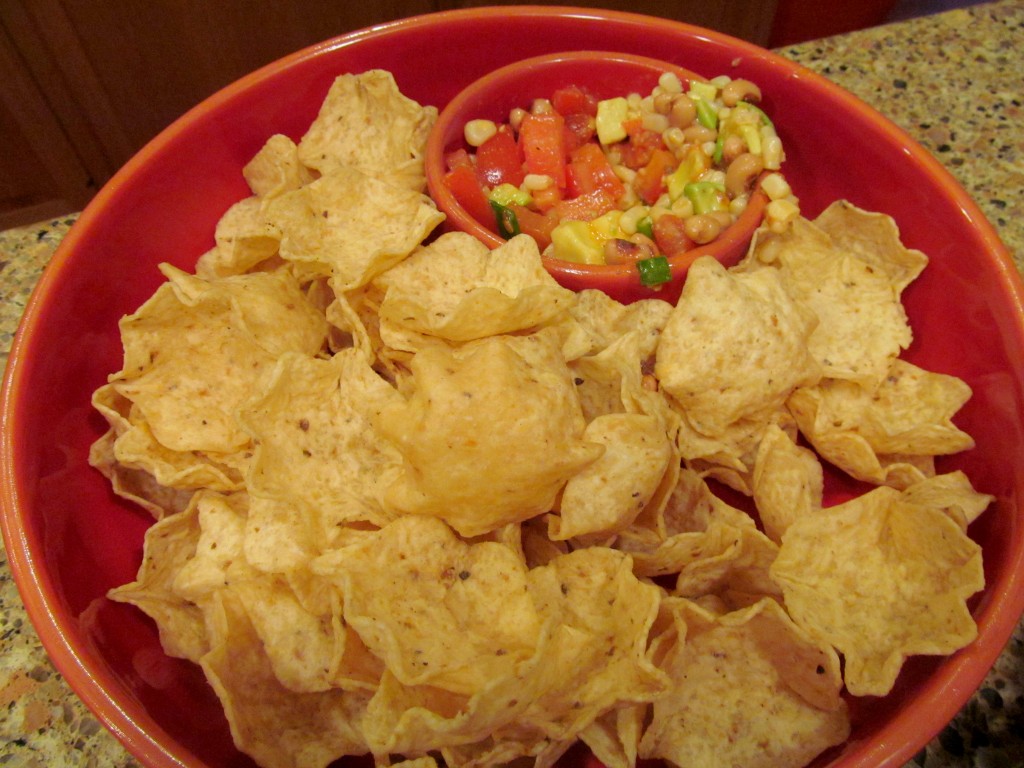 This dip of avocado, tomato, and black-eyed peas was really great too. 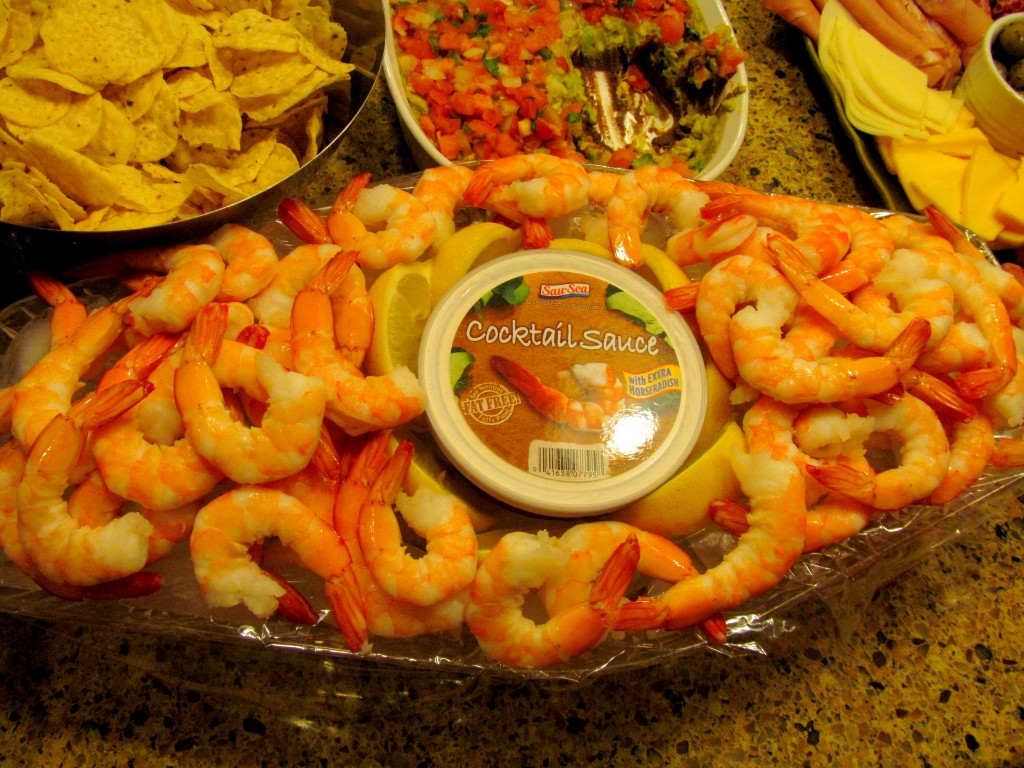 Plenty of shrimp showed up. 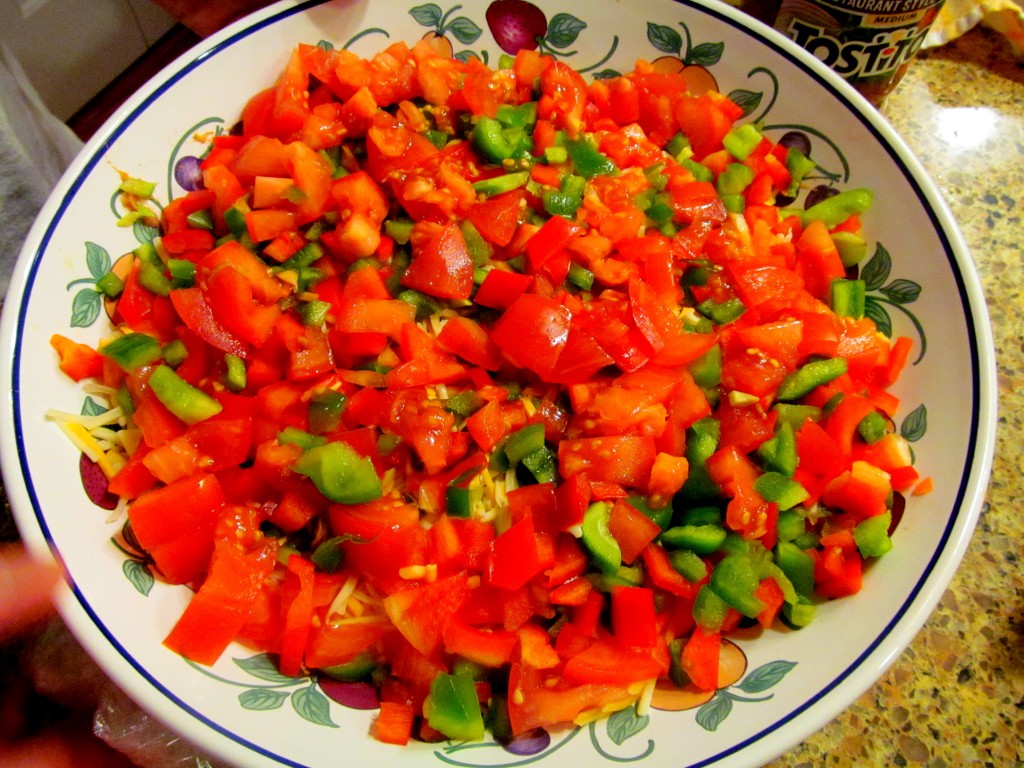 Another Mexican dip, this more decadent…under those freshly chopped veggies are layers of cheese, refried beans, and sour cream. 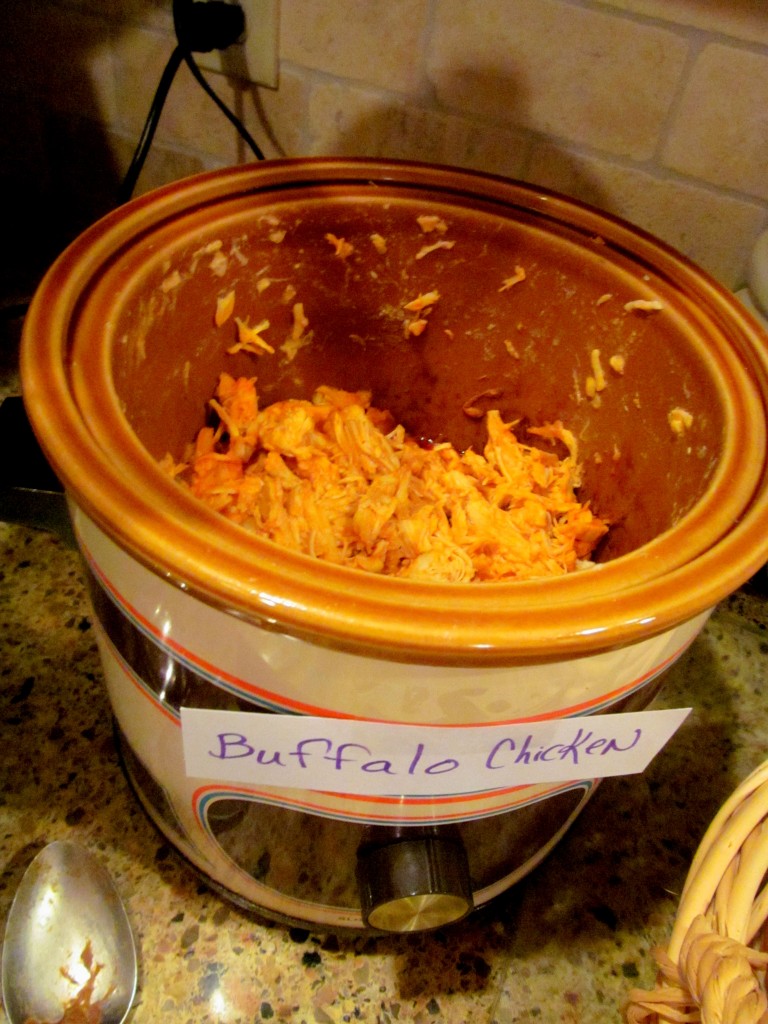 Mrs. Gerber’s famous pulled buffalo chicken. I almost missed out on it, it went so quickly! 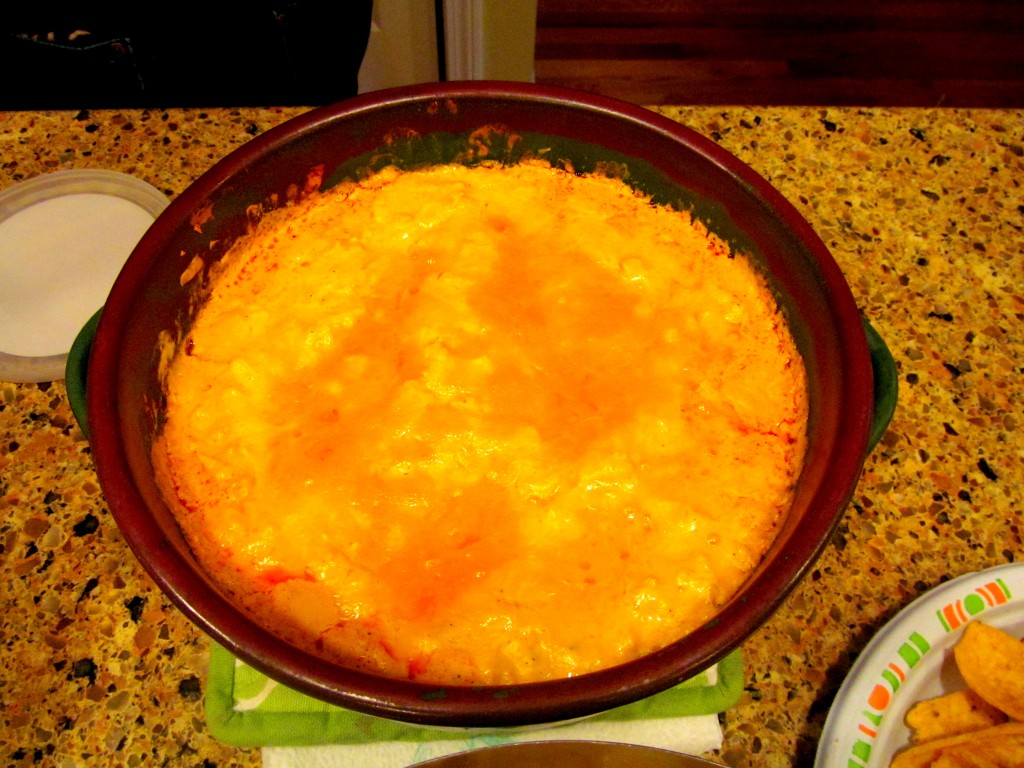 And the decadent version…a buffalo chicken dip. I think this was 1/8 part chicken, 7/8 part cheese. 8/8 part fab (and filling!) 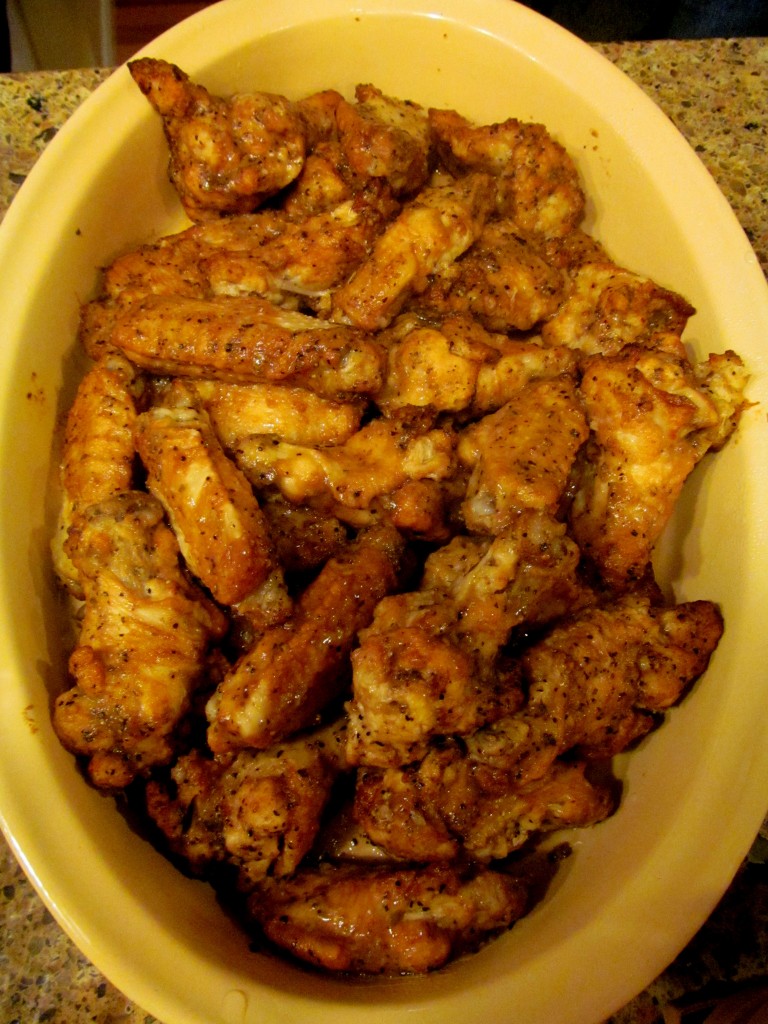 I’m not a huge wings girl so I just had one of these because I obviously had to sample! 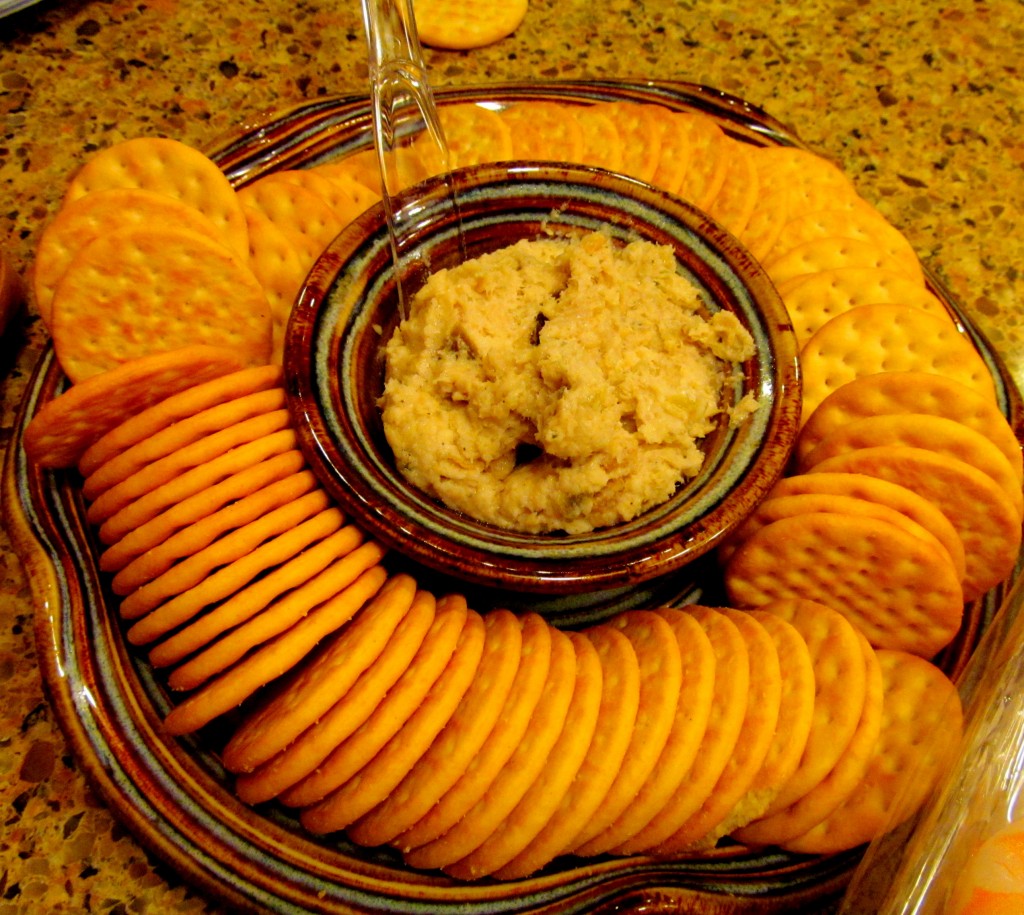 OMG. I cannot say enough good things about this smoked mahi mahi dip. I even texted Meg about it immediately after my first bite. I ended up just eating it straight off a plate. 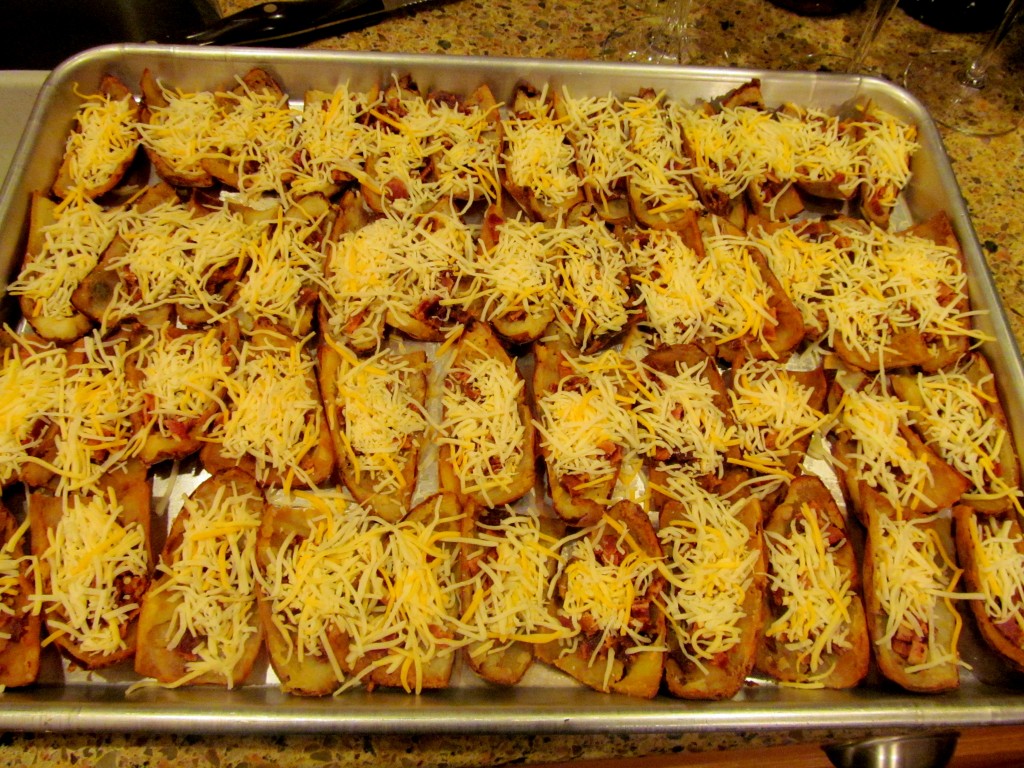 A before photo…Molly’s dad put together this recipe from his old college roomie…scooped-out crispy loaded tater skins! 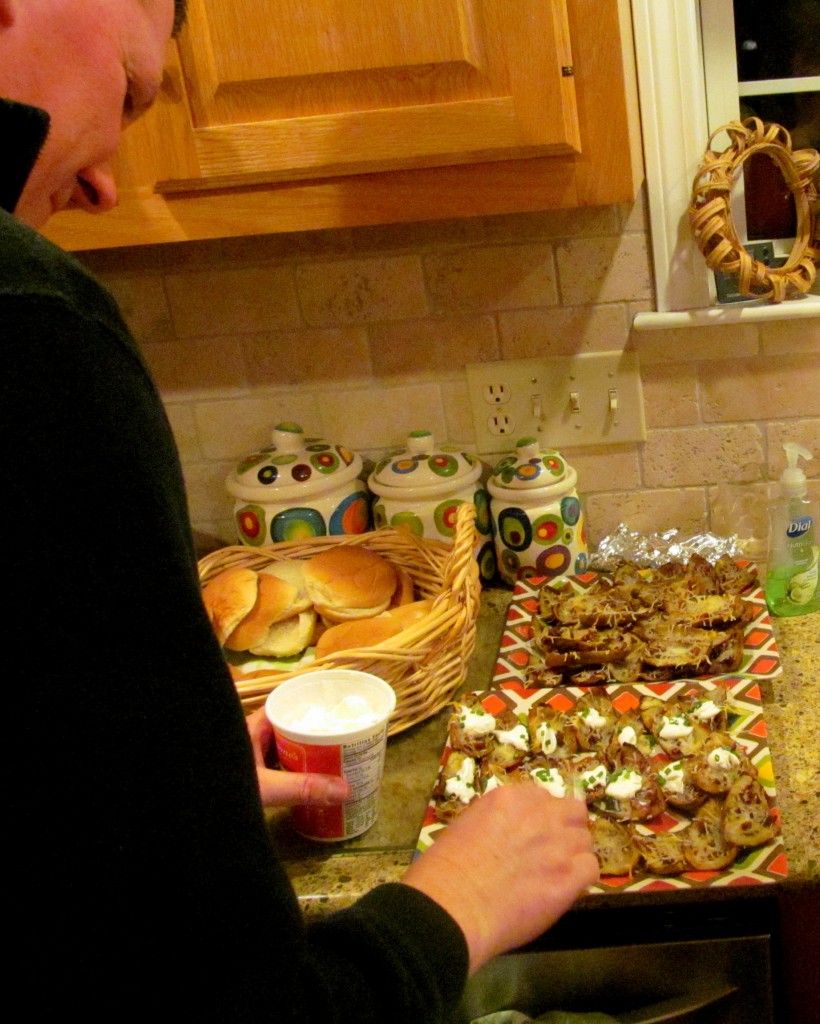 Mr. Anderson so lovingly dalloped these with sour cream after they left the oven. 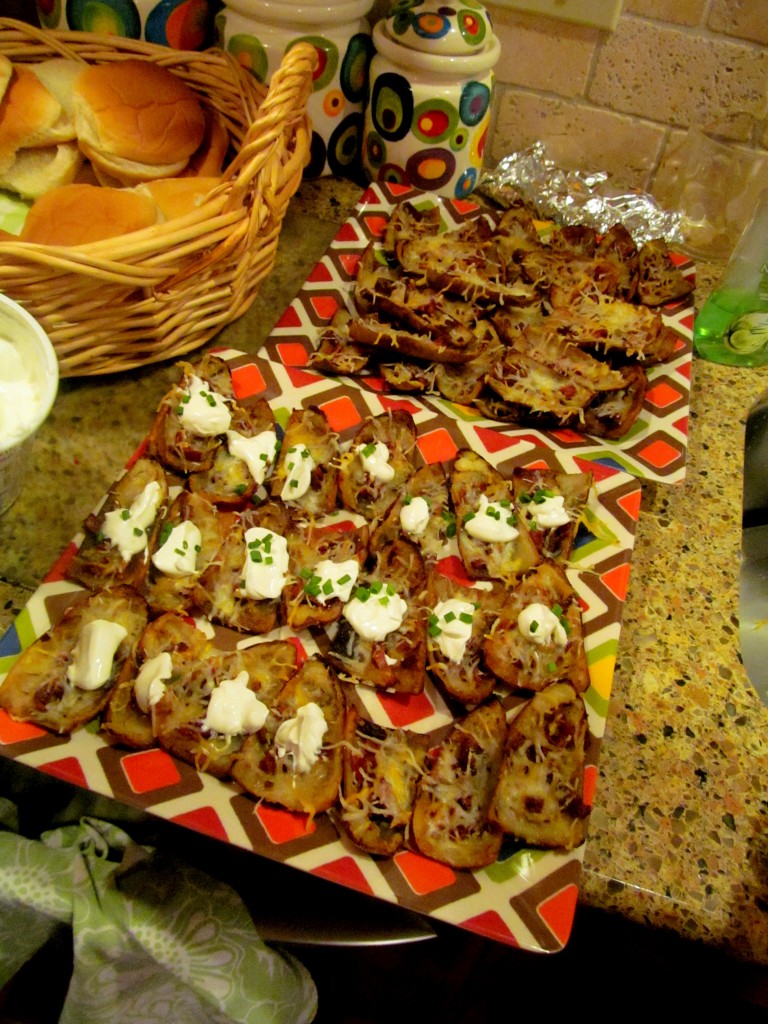 The after: SOO good. I had a couple of them but saved room for other stuff (it was hard).

I knew I was going to want dessert; I am not usually a sweets person but at these kinds of special gatherings there are usually delicious sugary bites that I just have to partake in. If I don’t, like I said before, I will obsessively think about them. Deprivation does NOT equal contentment or happiness! So I was just sure to save room in my stomach while I was noshing on the savory stuff above. 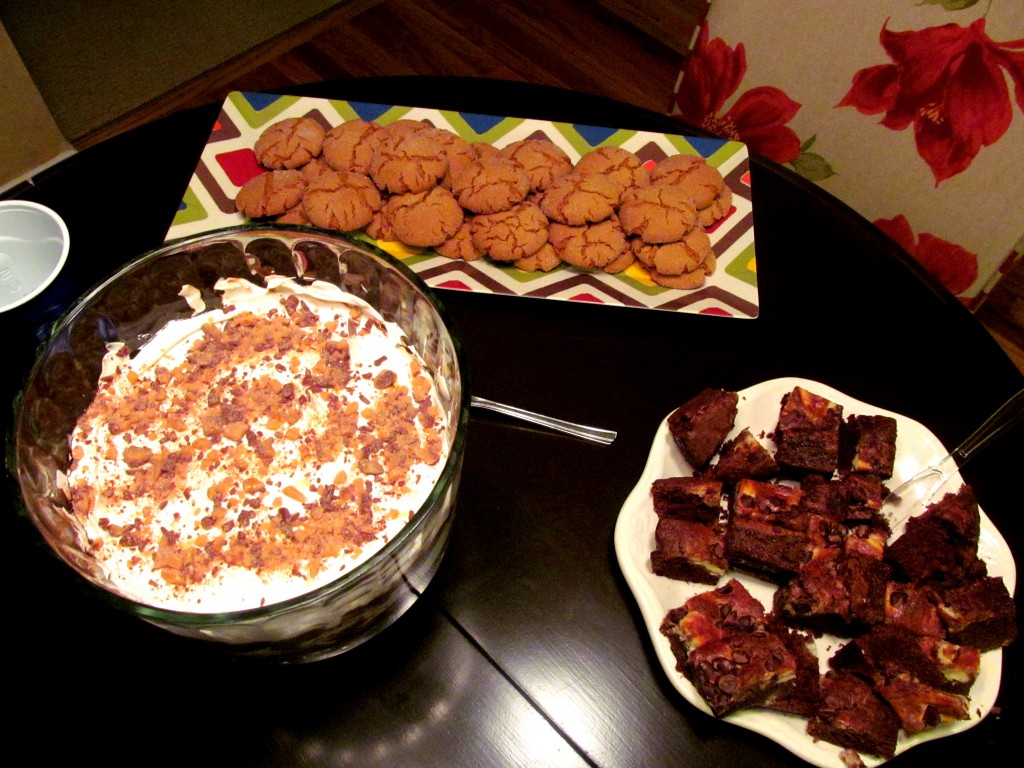 Indeed I’m glad I did! My favorite wine/food pairing is red wine and dessert, so this was the point at which I enjoyed a small glass of a lighter red (pinot noir) and sipped it between each bite. I also paired some dessert with the aforementioned Southern Tier Mokah. Predictably, I liked the wine pairing more. 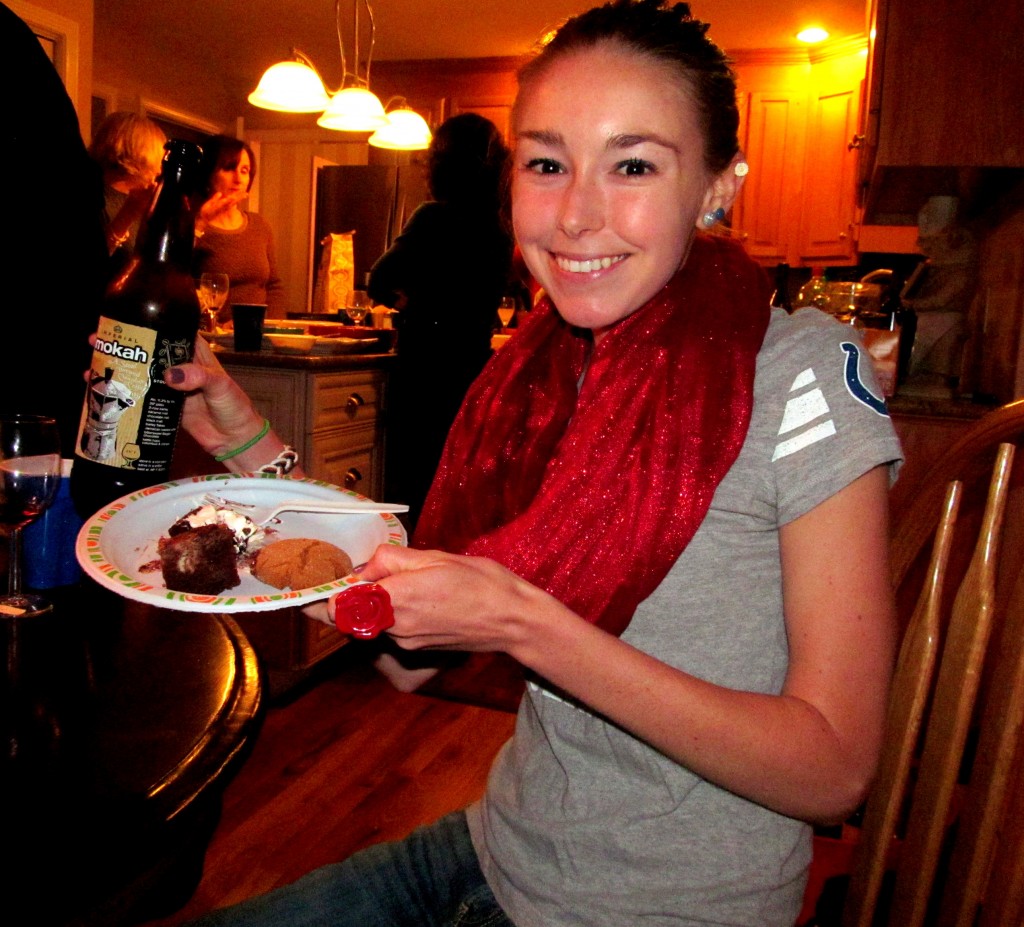 Then this ginormous platter of generic grocery store cookies came out, and despite their boring typical dessert status, I still found myself breaking off chunks of each cookie to dip into the layer cake. 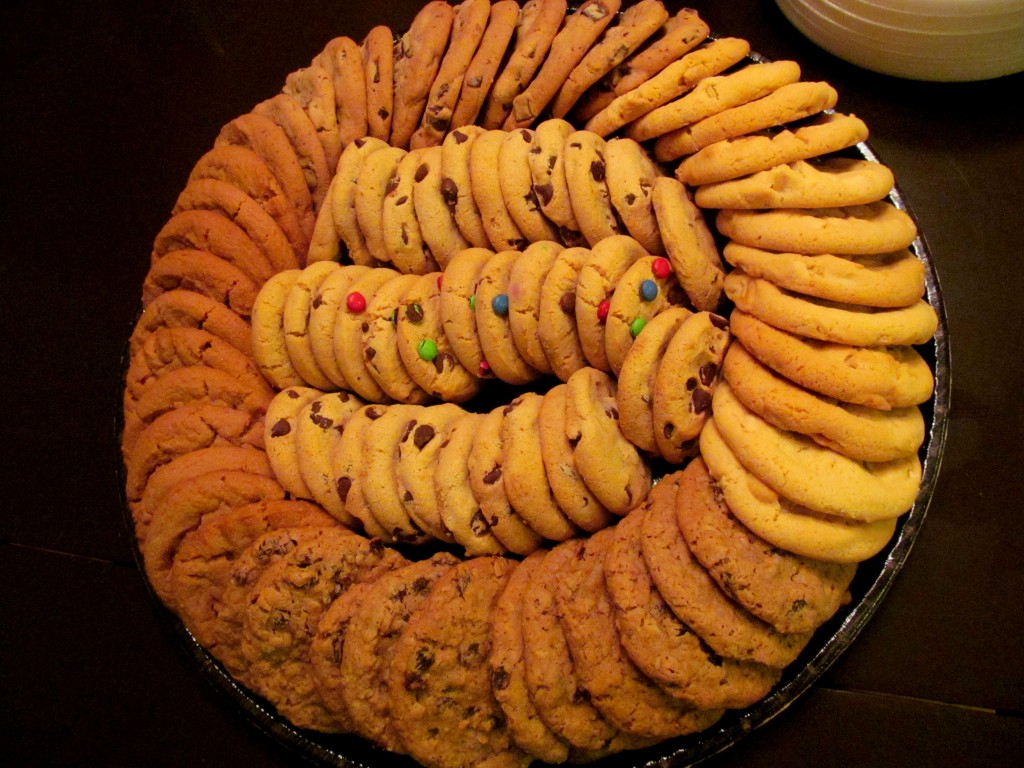 Then I realized I was just doing it because it was there, and I stepped away from the dessert table to have some fun. My friend from high school, Andrea, came by with her boyfriend (they did the same at our Easter party). I had a great time catching up with her and talking about what we used to talk about in high school – guys, clothes, wishing it were summer – only this time we could do so over drinks! 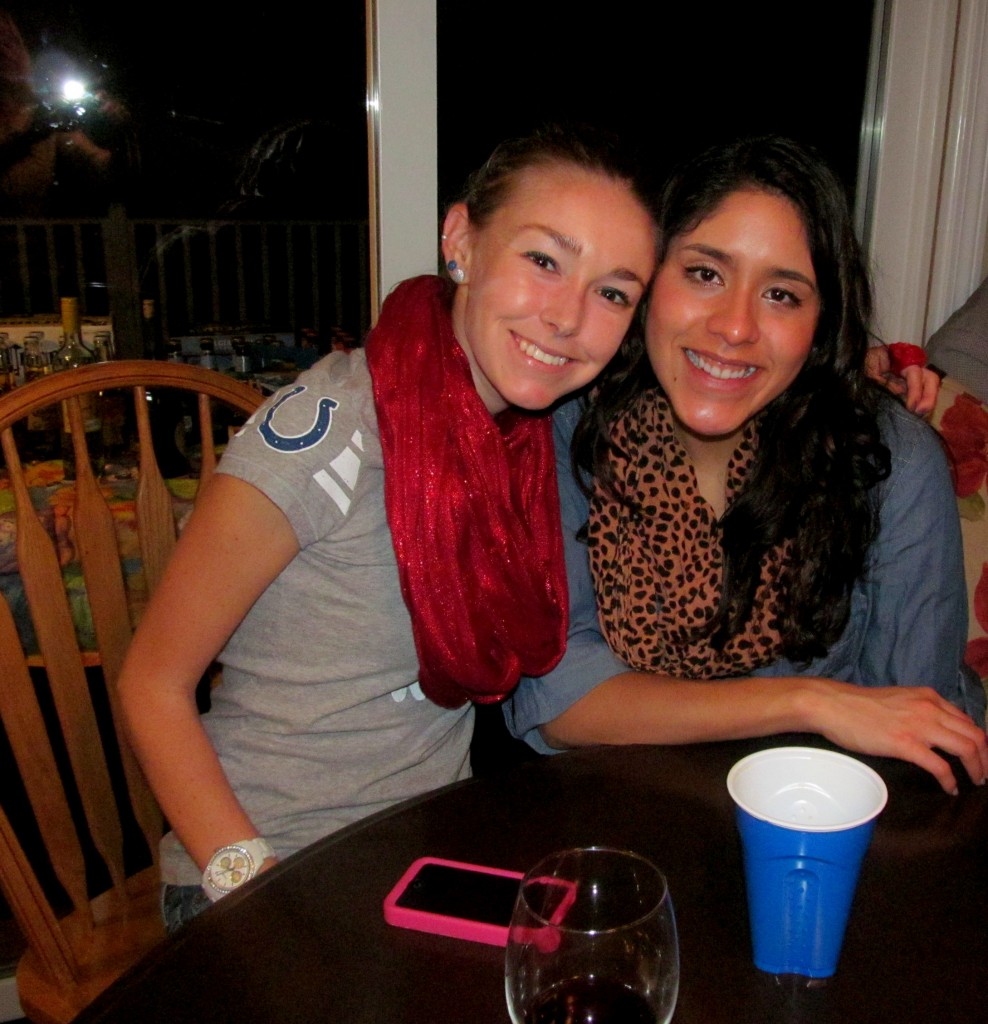 Yes I’m wearing a Colts tee. So sue me, it’s the only NFL top I own!

Andrea’s boyfriend is quite tall, and my mom is quite short. Of course this photo opp couldn’t be missed. 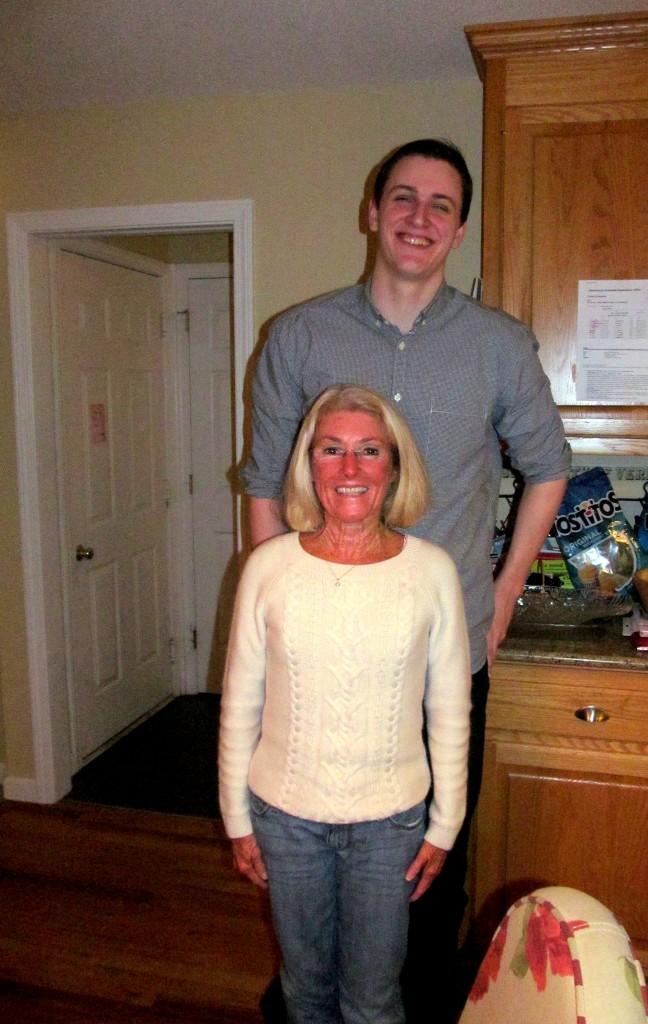 My mom was obsessed with this picture.

The only time I laid eyes on the TV throughout the night was during the half-time show. I shared a chair with my mom and we bogeyed down to Beyonce, who is my mom’s all-time favorite. Before the 4th quarter began, I was ready to go home. I was in bed reading before 10PM feeling full, but not too full. And proud, but…very proud. I wasn’t planning to restrict or overexercise the next day as I drifted to sleep. Yes I felt guilt. Even while I typed this post, my ego was shouting lies at me. But I’m honestly so happy that the positive emotions are far outweighing the negative that I am not listening. This family friend gathering went so much better than Christmas Eve did and that was only a little over a month ago. I have to say I think my soul-searching has been paying off!

How did you do with living a life of balance during Super Bowl Sunday (if you “celebrated”)?

Which of the fabulous eats in this post would you have enjoyed most?

What were your thoughts on the half-time show? No I’m not going to ask about the game.