I was sent complimentary Biena Foods roasted chickpeas to review. All opinions are my own. This is not a sponsored post. 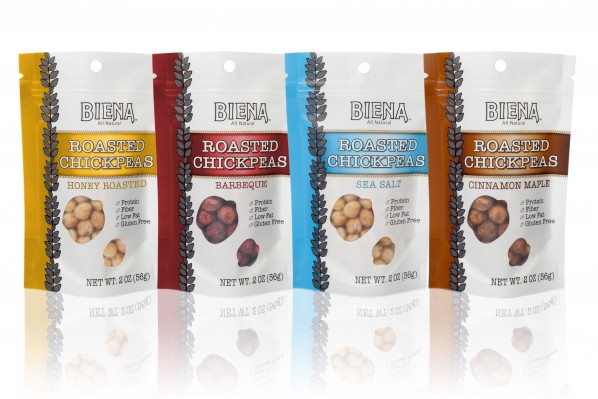 I will be honest with you – there is not much difference between the roasted chickpea snacks offered by The Good Bean and Biena Foods. They have the same amount of calories, fairly similar flavor variety, and comparable all-natural ingredient lists. I will say however that I much prefer Biena’s Sea Salt chickpeas to The Good Bean’s, which are too salty. The point of sea salt is a little goes a long way, and Biena Foods seems to get that! I also loved the Honey Roasted flavor, and The Good Bean does not offer a comparable option. I had the Honey Roasted both in a savory lunch (my salad) and an after-dinner sweet snack (in my favorite Jello pudding); I love that it mixes well with both sweet and savory ingredients!

Just like The Good Bean’s version, I loved the Biena Foods Cinnamon Maple flavor. It’s made with Vietnamese cinnamon, pure maple syrup, and evaporated cane juice. It seriously tastes like Cinnamon Toast Crunch (thanks Brittany for that accurate comparison) – and so much more protein and less processed ingredients! I had the above snack two nights in a row – the Cinnamon Maple roasted chickpea snacks with plain Chobani and raspberries. All mixed up in a yogurt mess…heaven! Perfect for after-dinner.

The other new flavor Biena Foods is offering is Barbecue. I’d say it’s most comparable to The Good Bean’s Chipotle & Lime flavor, but with way less of a kick. I totally loved it!

Bottom line is price. I get that. Biena’s website has a nifty store locator, and if there are no stores near you that sell these roasted chickpea snacks, you can buy directly from them online ($11.96 for a 4-pack). Shipping (often a deal-breaker for me) is a flat rate of $3.99 so you’re better off stocking up, which is totally possible online since Biena’s website only sells the 4-packs (of one flavor or a variety). But you can get individual bags in stores, which may be a better bet for those who don’t want to stock up or only want to try one or two flavors at a time.

Biena Foods is giving one lucky Cait Plus Ate reader a 4-pack of a flavor of the winner’s choice! This is open to continental US readers only and entries will close this Monday 10/14 at 11:59PM EST. Please leave a separate comment for each entry method or multiple entries won’t be counted!

Plenty of entry options so good luck and remember to leave a comment SEPARATELY for each entry! The winner will be announced next week once the giveaway closes.