Hartford TheaterWorks “Christmas on the Rocks”

I received press tickets to a performance of this play for review purposes. All opinions are my own. This is not a sponsored post.

I worked with Hartford TheaterWorks to do a ticket giveaway promotion for their current production, Christmas on the Rocks. Thankfully I too received a pair of tickets so that I could check out the show myself and share my thoughts! This past Saturday I attended the 4PM matinee (I love the 4PM time…so easy to go out to dinner downtown after!) with my friend Howard. 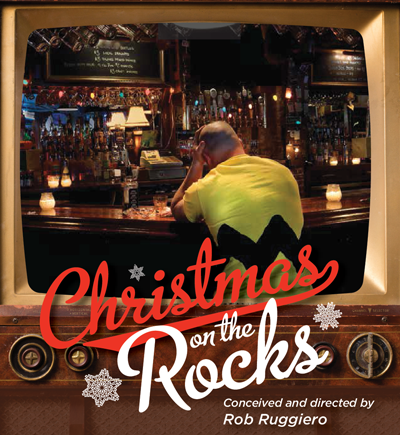 This run is the play’s world premier and runs until 12/22. The website states: “It’s Christmas Eve in a rundown local bar. Expecting a silent night, the bartender finds himself mixing drinks for a parade of surprising guests – children from your favorite Christmas specials and movies – now all grown up! Tiny Tim, Charlie Brown, Cindy Lou Who and a host of others pour out their Christmas woes in this delightful holiday parody.” The shows are pretty reasonably priced especially given the fact that every seat in this small, intimate theater is a good seat! TheaterWorks operates without tickets. Instead you pay for a general admission reservation, and the earlier you show up, the better your seat will be. You can however pay $15 for a center reserved seat upgrade, which enables you to show up not too early (15 minutes before the show) and still know you’ll have a great seat. Click here for more info!

I was pleasantly surprised to find that TheaterWorks has quite a nice bar/cafe! Complete with a legit espresso machine, spiked egg nog, and a varied selection of other adult beverages. Oh, and ice cream! Howard and I each snagged a Sierra Nevada beer to sip on during the performance.  I was a bit confused as to how the mixed drinks could cost more than the beer/wine, but maybe they aren’t that strong!

As you can see above the set was quite incredible. I adored its small details, like the closet to the left of the bar (not pictured) where a mop and other cleaning supplies were clearly stored, and the little red bow on the temp unit on the wall (upper right of the photo). The set designer Michael Schweikardt deserves major props (no pun intended). As do costume designer Alejo Vietti and wig designer Brittany Hartman! Each character’s look was enough to hint as to which childhood Christmas character he or she was supposed to represent, from Charlie Brown’s iconic yellow and black sweater to Ralphie’s eye-patch. Of course the actors were awesome, and I give Harry Bouvy and Christine Pedi all the credit in the world for their long monologues and ability to play several characters each. I can’t even imagine how much work it takes to not only memorize all those lines, but know them well enough to have enough “brain power” leftover to put effort into good acting. I really like that this play was about 90 minutes long with no intermission. I’d much prefer to just get in and watch a performance straight-through, and my mind does tend to wander after a couple of hours, no matter how good a play is.

I’d definitely recommend “Christmas on the Rocks” to anyone looking for a fun and affordable show to see downtown, especially if you want something more intimate than a big theater. Of course you’ll need a sense of humor and the willingness to see your favorite Christmas stories take a cynical turn, but that’s what makes this show unique! The play will surely make you laugh and is the perfect length for a dinner/play night out! Thank you to TheaterWorks for having me!

Who was your favorite childhood Christmas special/movie character?

Have you ever seen any holiday-themed performances?