I Live In Marvelous Boston!

It’s official! I LIVE IN BOSTON! I start work on Wednesday (thankfully my new employer gave me a few days after moving to settle in) and the last few days have absolutely flown by – in a good way. They’ve been so marvelous in fact, I can hardly stop smiling.

My last day at work on Friday was surreal. I honestly don’t think it’s hit me yet that I’ve left that job. Actually, it did hit me a bit, but only as I was leaving our post-work happy hour shenanigans that extended well past happy hour. And they would have extended later had I not had the discipline to leave in time to get home and get enough sleep before my early moving wake-up call. Spending that time with my co-workers was marvelous though. I’m SO glad I got the chance to have a last hurrah with all of them. As I mentioned on Friday, it was the last day for three employees, so the whole evening was very emotional. And fun! 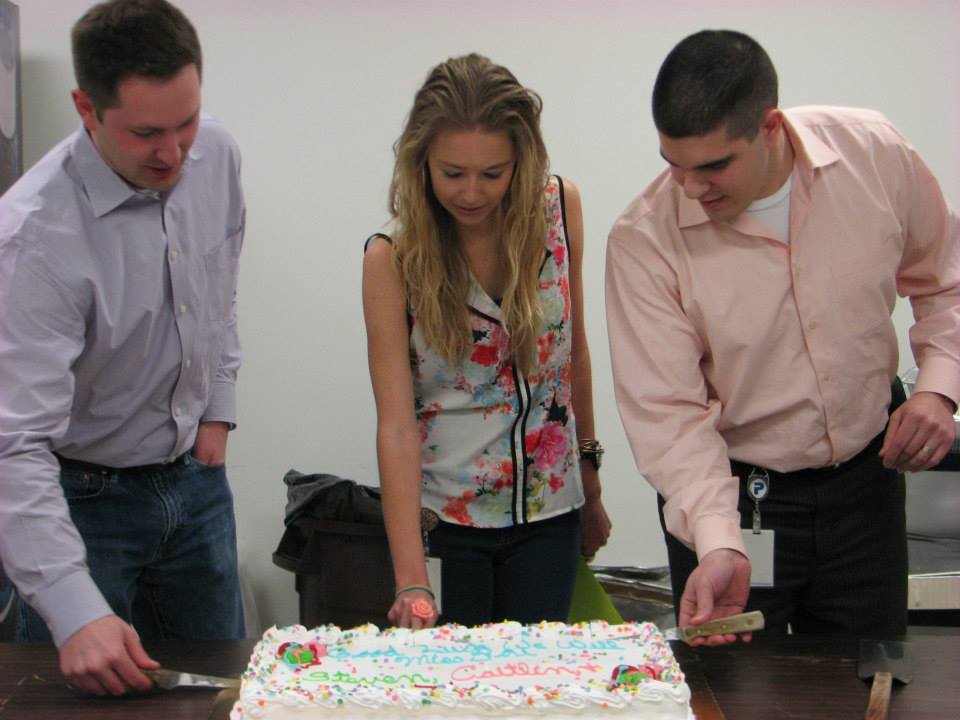 Tom, I, and Steve cut our goodbye cake at work! 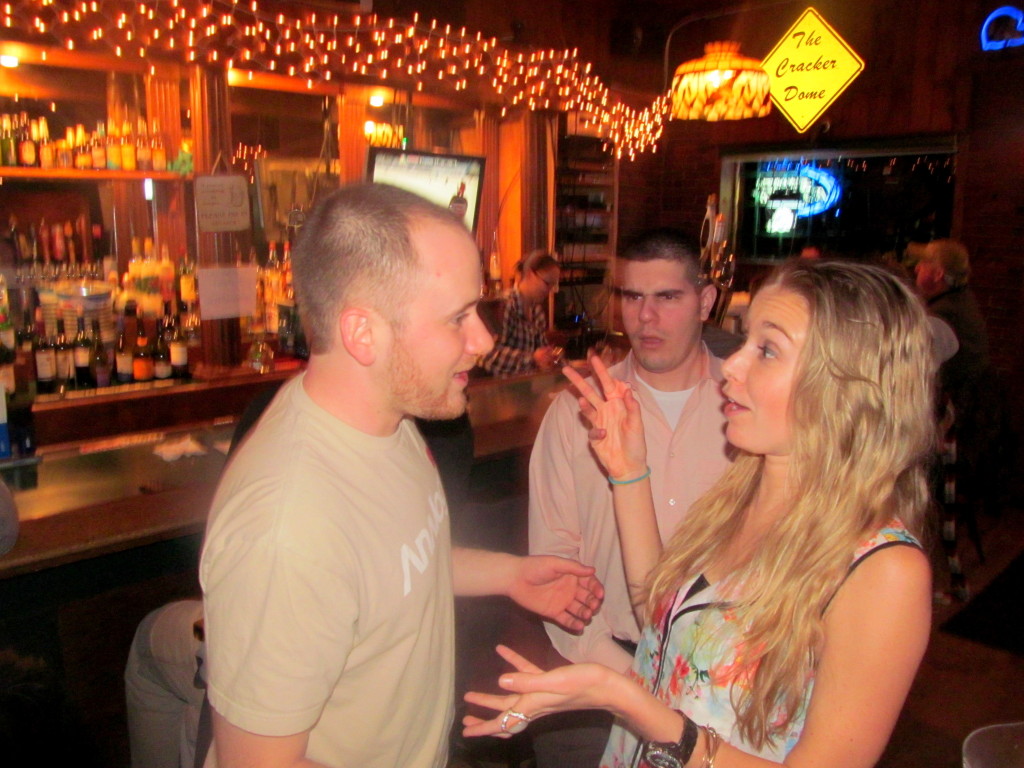 Can we please talk about this photobomb? 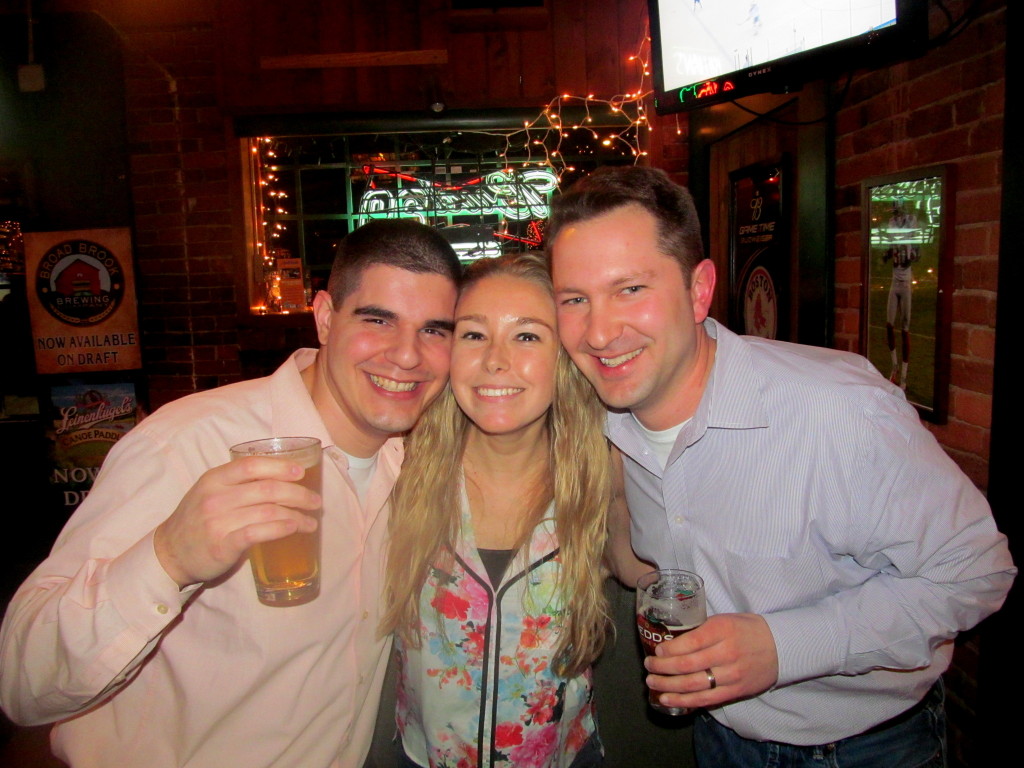 With goodbye drinks this time instead of our goodbye cake! 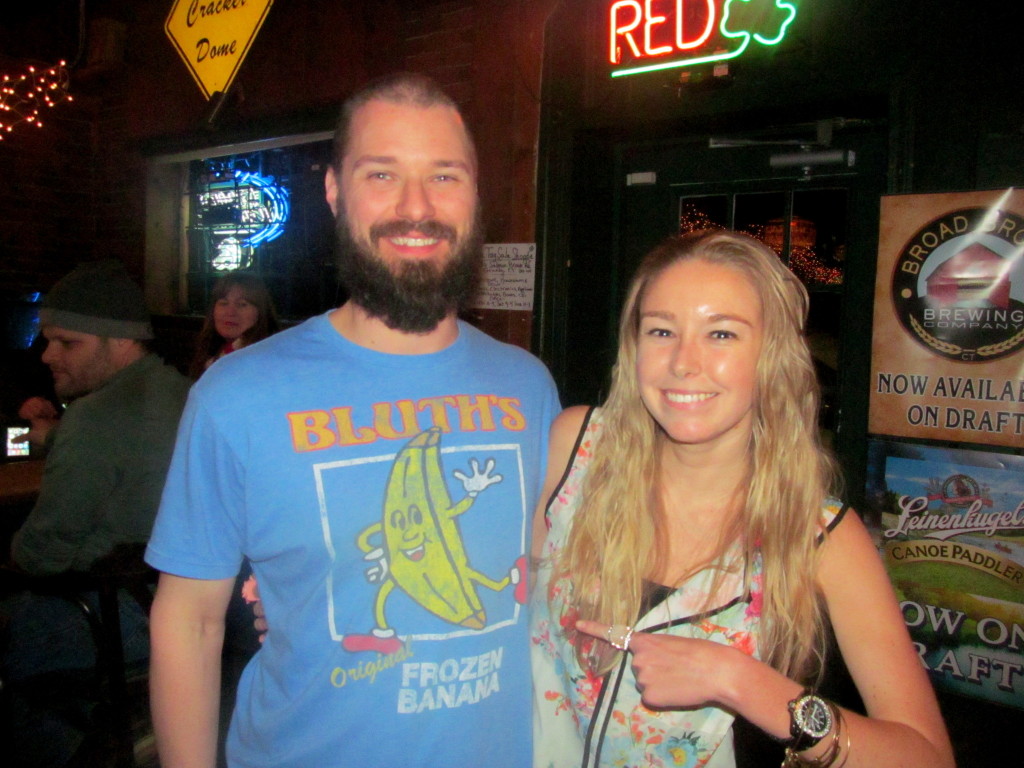 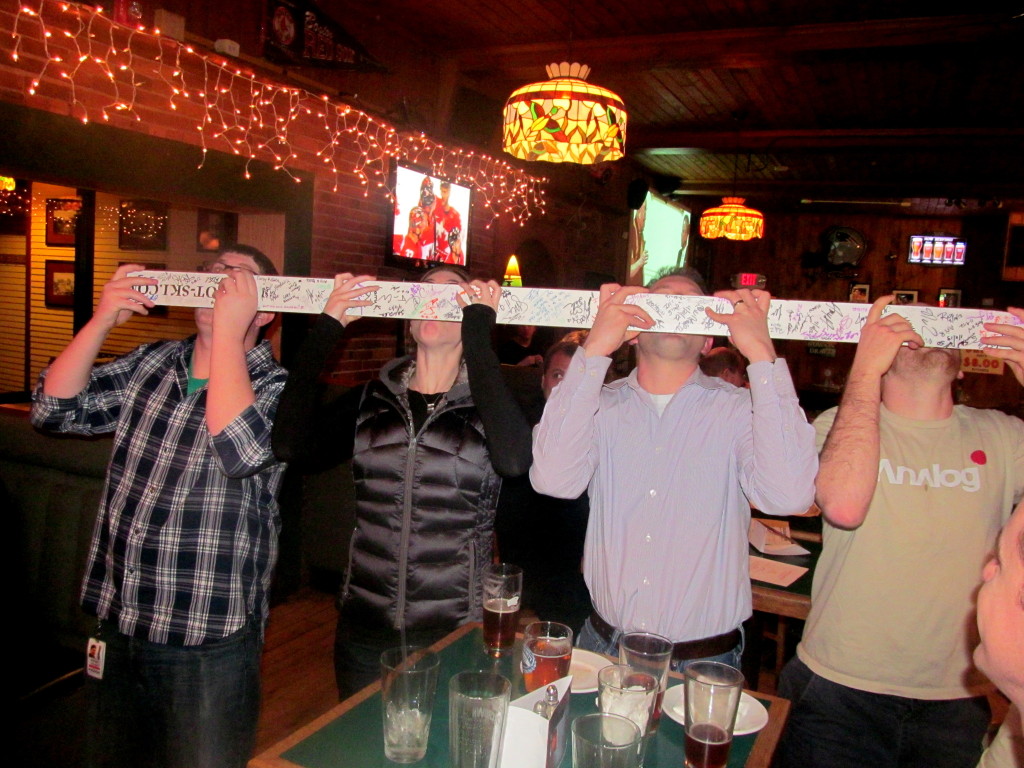 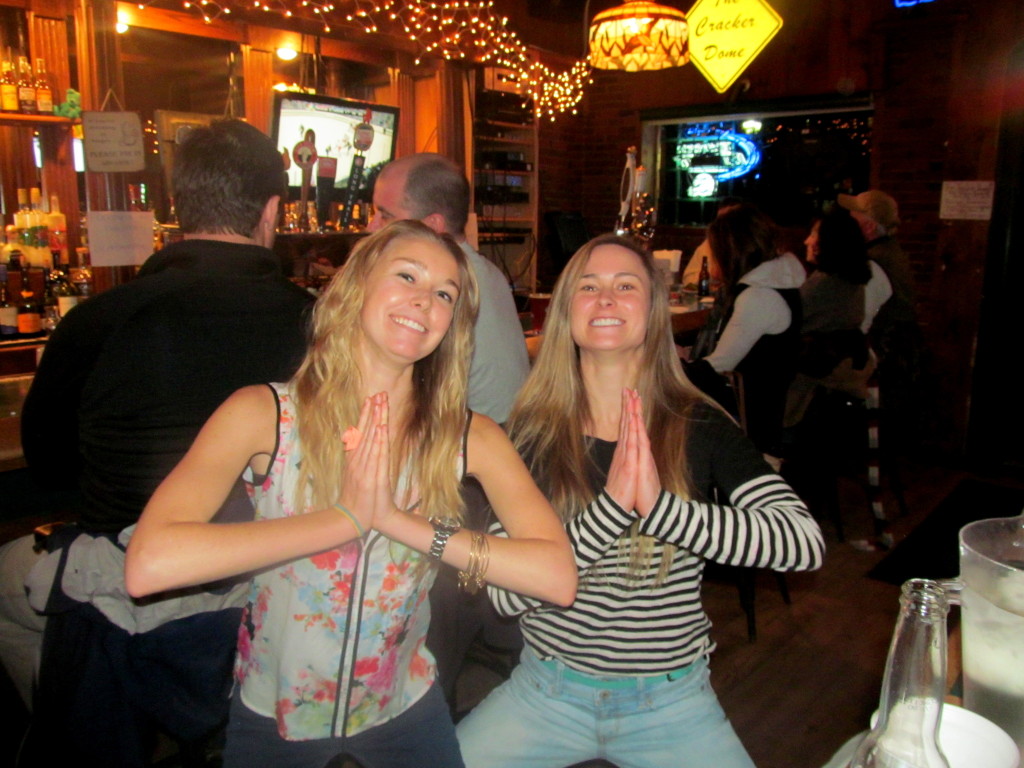 French. Fries. Thanks for them and many more marvelous eats, Cracker Barrel Pub!

Thanks to stopping after a few drinks, spreading them out, drinking lots of water, and eating enough/PLENTY OF carbs…I felt good the next Saturday morning when the movers showed up at 7:15AM. HOP Moving, by the way, did a marvelous job! So affordable, very professional, and super helpful. I can’t recommend them enough. My dad and I drove separately so that he could stay the night to be around both Saturday and Sunday to help me get set up and take me shopping to get some “essentials”.

GORGEOUS morning view from the rooftop terrace of his hotel!

After a long Saturday of unpacking I went back to the Marriott with Dad so we could shower and get ready to go have some fun. I was not about to turn down a night in a less-than-a-year-old hotel, even though I had a new apartment waiting for me! After getting cleaned up we started the evening with marvelous cocktails at The Hawthorne. I’ve been wanting to visit there ever since my friend Vijay, a Boston restaurant pro, made me the recommendation.

Cheers! My cocktail was INCREDIBLE.

We had dinner at my go-to cocktail haven, Eastern Standard…which just happened to be next door. We found bar seats fairly quickly and I went with a fizzy gin cocktail for my second drink because I wanted something a bit less “potent”. Had to stay on-par for more moving activities the next day! The drink was a little TOO fizzy for me – or shall I say foamy – but my beet salad with smoked salmon was marvelous.

After dinner I ended up getting a mini Haagen-Dazs Dulce de Leche from the hotel’s little convenience store. I enjoyed it in bed back up at the hotel room, paired with a bit of whiskey. UGH, deciding to get that ice cream was too much of an ordeal. As in more than it SHOULD have been. It took forever to finally just go for it – I couldn’t stop thinking about a dessert! – and just the mental battle over it made me start tearing up. But I gave myself a little kick in the butt and said goddammit, just eat the ice cream. And I did. And it was marvelous. 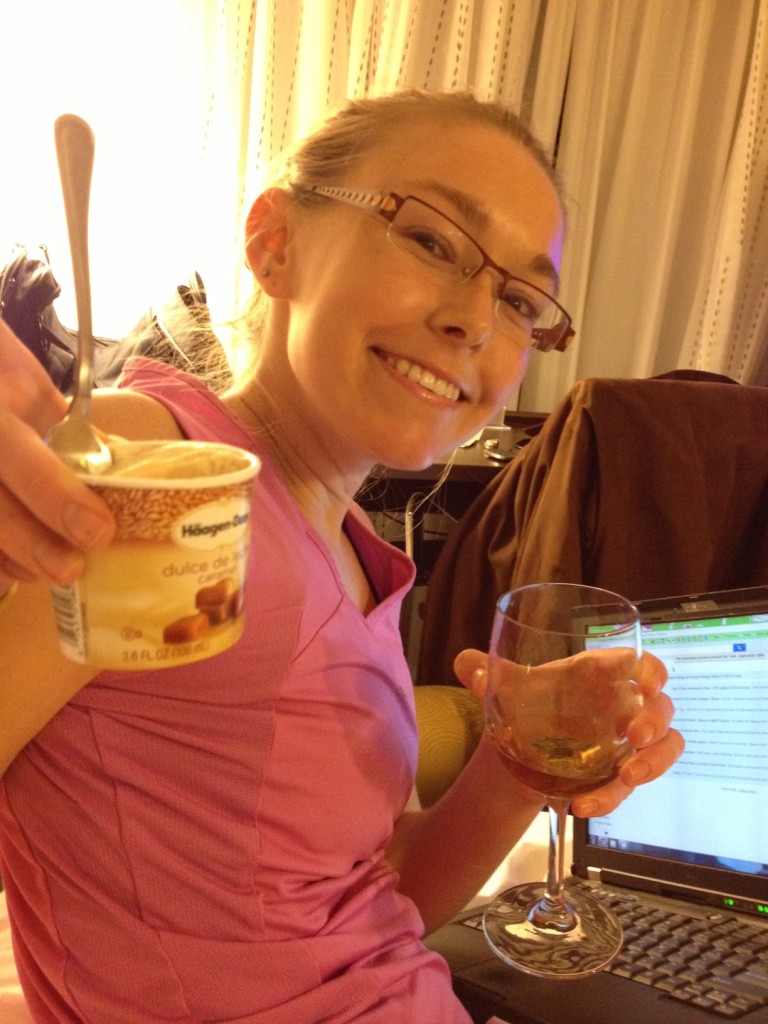 The next day we were up and at ’em to visit Target! I had a list of apartment stuff I still needed (like a TV!) and ended up getting some important grocery staples too. The cable and internet are all set up, and I even managed to set up the wi-fi myself – go me! While my Comcast service wasn’t super marvelous (the setup guy was late), he was still really nice and everything is working great. 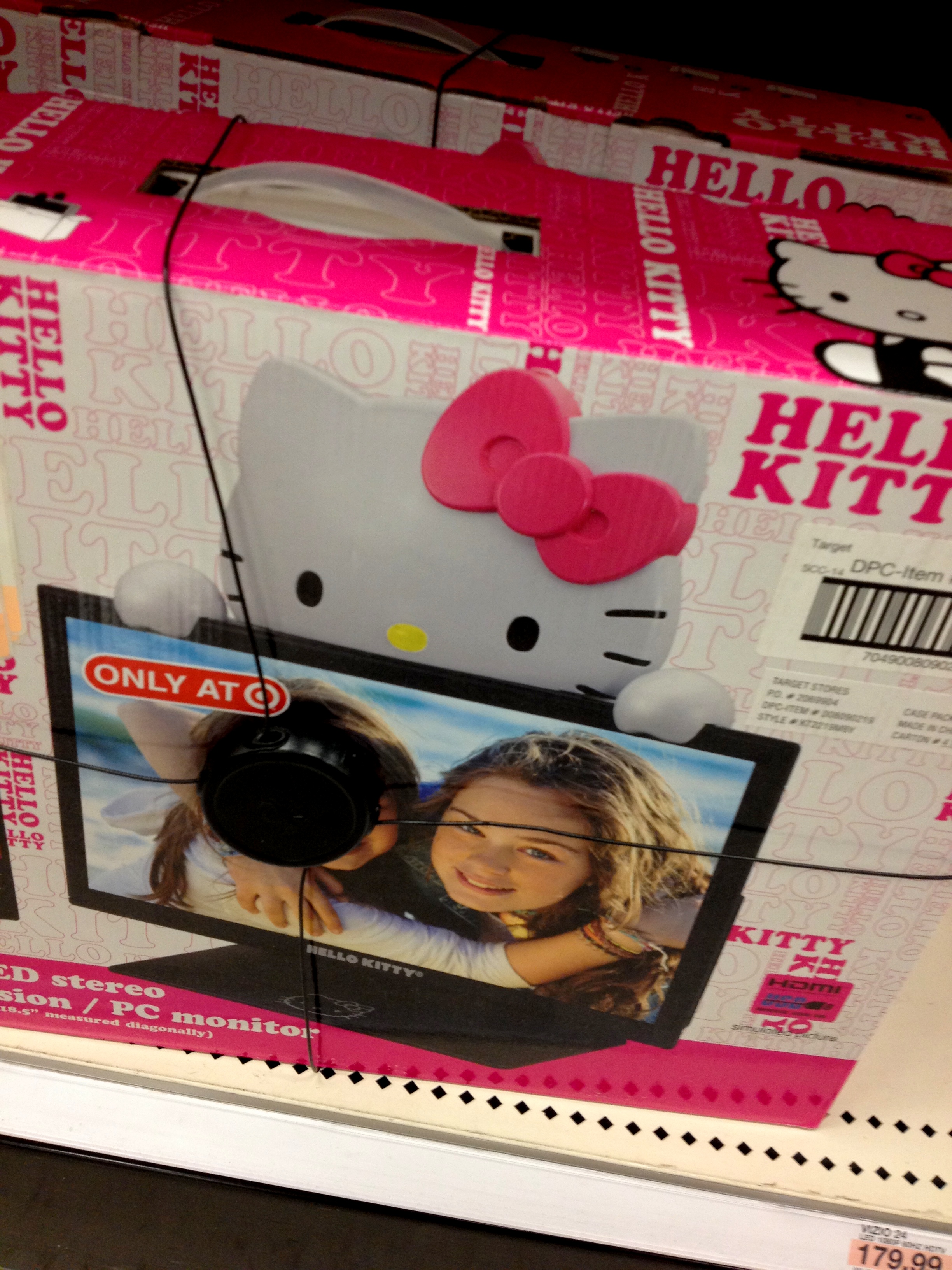 My new TV. JUST KIDDING. But really, who doesn’t want a TV with a Hello Kitty attached and peering over at you as you watch? Right Katie? 😉

We also hit up Whole Foods for lunch and some produce and poultry for my upcoming week of salads and recipes. I took advantage of some on-sale chicken and am plotting to add it to this recipe of Kaitlin‘s, plus I already made Jenna’s Roasted Winter Vegetable Salad for meals this week! Having marvelously healthy food ready and waiting in the fridge makes me feel great. 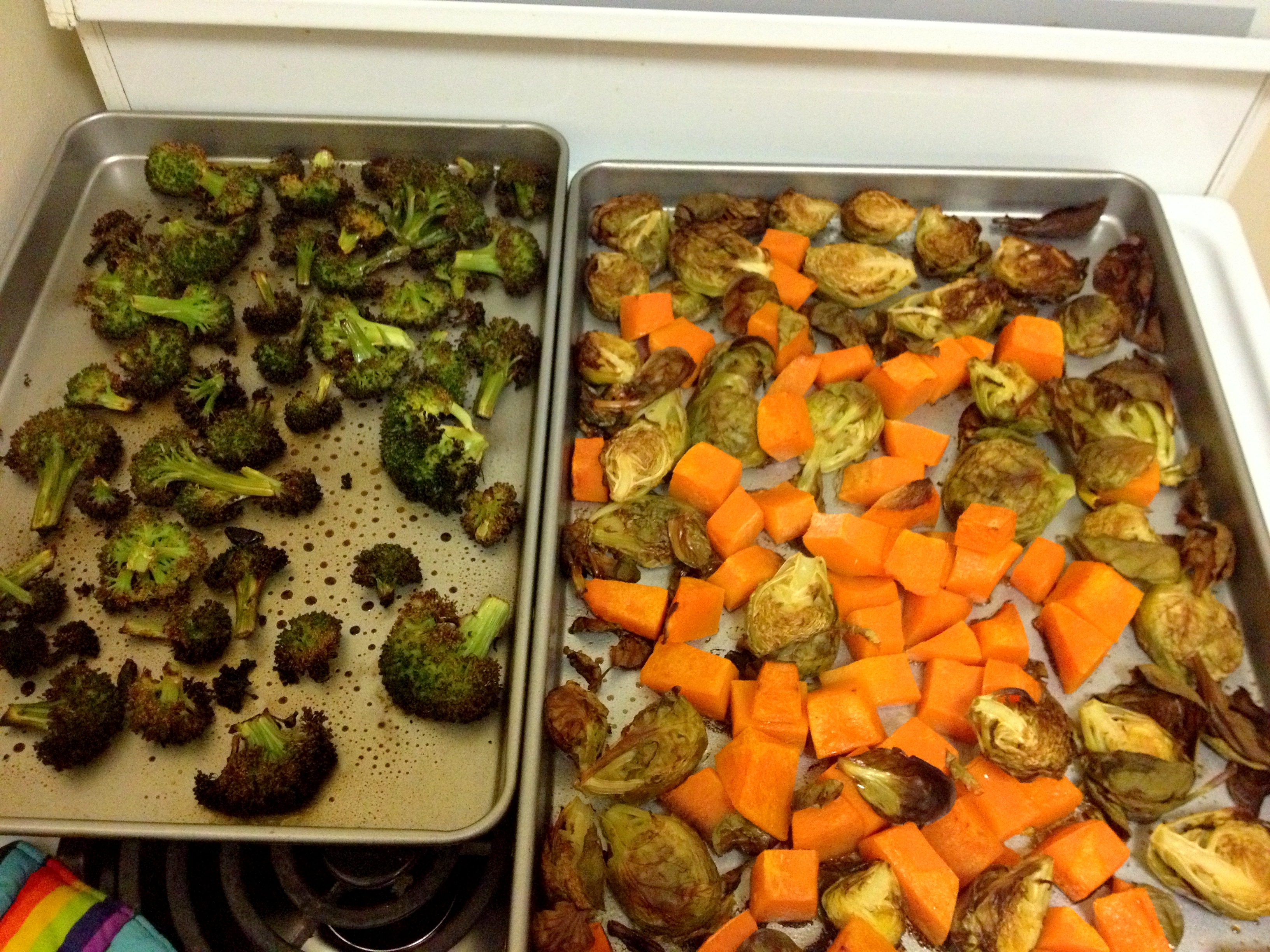 You know what else also makes me feel great, is the marvelous assurance that I chose the right gym. Sunday morning while my dad set up my TV (what a guy), I walked over to try out my first spin class. Verdict? ADDICTED! The instructor, Danielle, was absolutely incredible. Her energy was insane, she danced on the bike, she played the craziest music, pushed us hard, and seriously made the class feel like a party. I was grinning so much and I’ve never done Soul Cycle but I bet that is just what those classes feel like. I already have booked a spot in her 6PM class this evening. Oh, and not one person asked or tried to turn on any fans in the room. THESE ARE MY PEOPLE.

After doing saying goodbye to my dad and doing some more unpacking I ended up making a marvelous spontaneous dinner date with Becki. We first met at – and she was the highlight of – HLS 2012. When I found out I was moving to Boston I knew we’d hang out, but I had no idea it’d be on my first official night alone in the city!

Becki and I when we met!

Her friend recommended Regal Beagle in Brookline’s Coolidge Corner. Good thing because I totally would’ve walked right by it…it looks from the outside like a place where I’d only be able to find tavern/pub food. Not so…the food/drinks were marvelous! Can’t judge a restaurant by its cover and I never tire of learning that lesson. Becki herself had walked by it a ton and had never been inside! 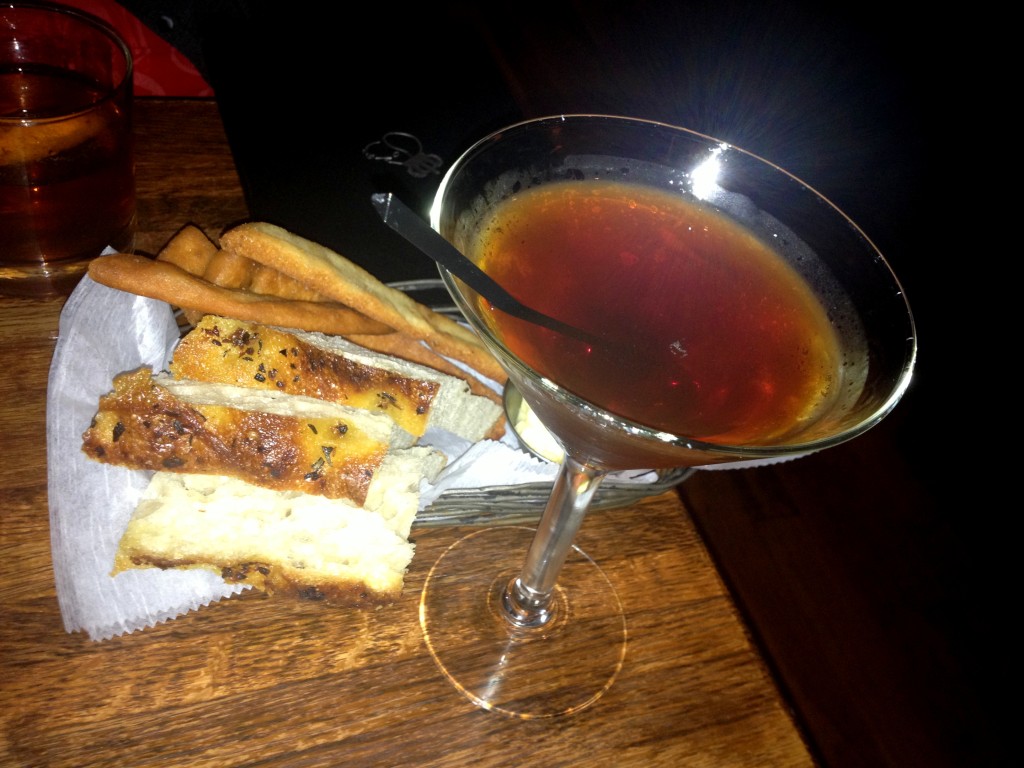 See that bread basket? It not only contained bread but some sort of variation of JUST crust. It was like ultra super crispy marvelous crust, and I LOVED that. All bread baskets should just contain crust. Yaaaaas. 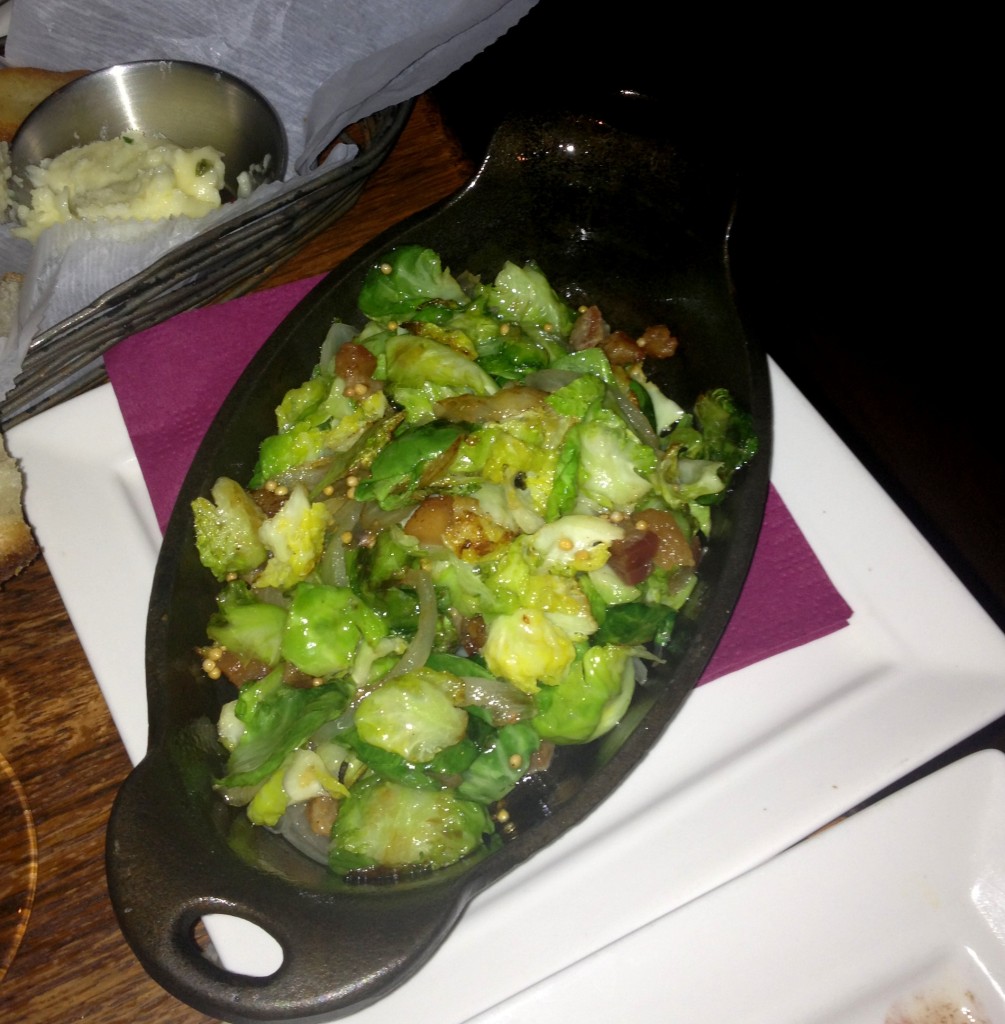 Of course I had to order a side of brussels since they were on the menu! Becki and I shared those, an appetizer (duck sausage with polenta, OMG) and an entree. Everything was so marvelous that not a speck was left on either of our plates. 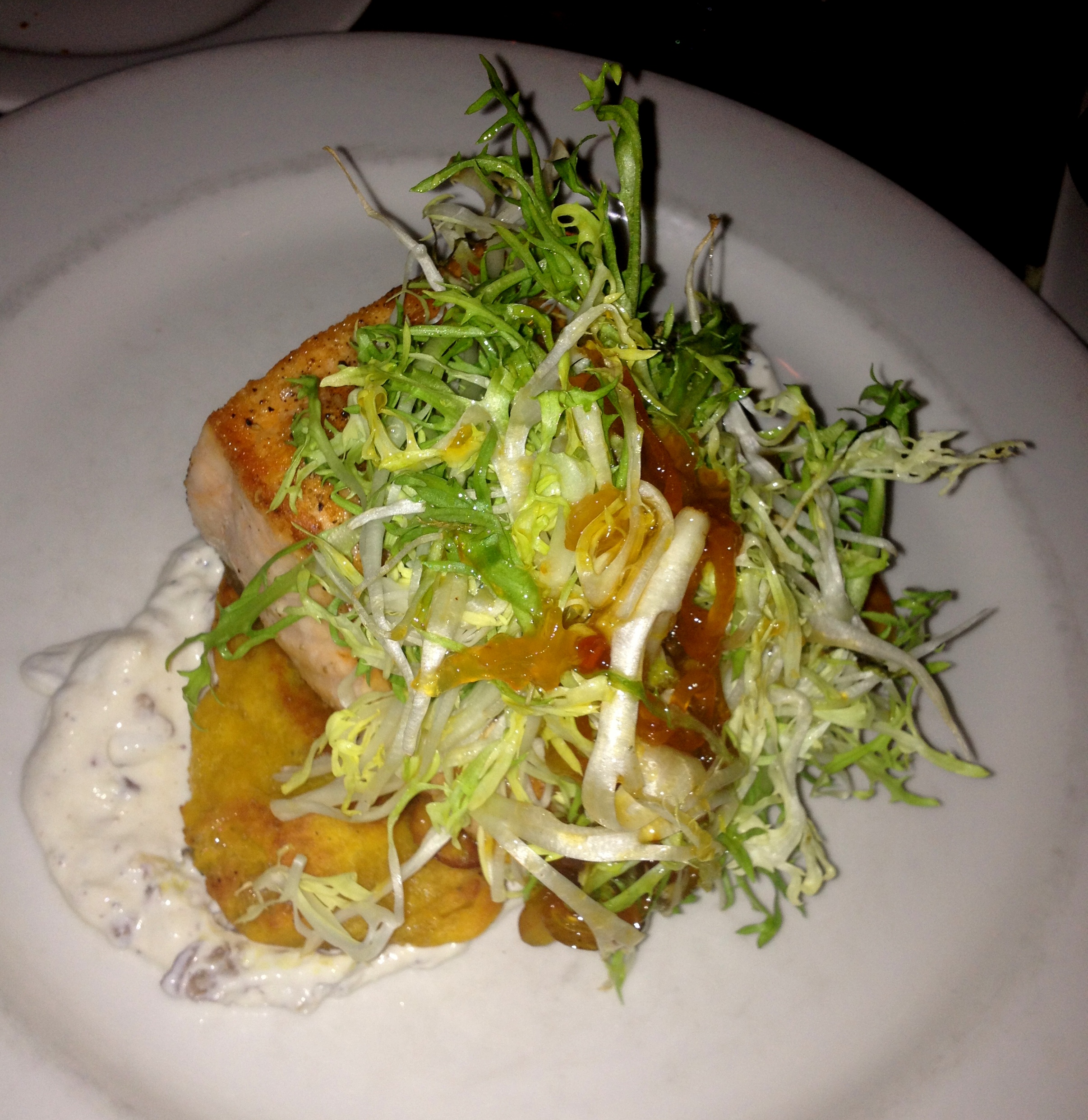 Roasted salmon with kumquat, frisee, and butternut squash latkes. Those were TO DIE FOR.

After Becki and I parted ways I walked back to my apartment, marveling at how marvelous it will be to be doing so much walking. Bye bye driving, it was nice knowing you! I worked on this blog post once I returned to my apartment, got ready for bed, and finished up my latest read. My dad is a master bed-maker and before he left for CT he made sure to put my new sheets on my bed. It will never look this good again.

While I still have much to do to get my apartment all settled, I think I’ll be done pretty soon because the more I get done, the better I feel. So you’ll see a post all about my new place soon enough! But it really is marvelous. Honestly, this whole thing is. I’m blogging right now from marvelous Refuge Cafe, which will surely become a go-to spot given its close proximity, healthy menu options, delish coffee, wifi, cozy and hip ambiance, and BEER ON TAP?! Ha, not having any of that right now, but I am sure it’ll happen eventually 🙂 after I’m done with this blog post I’ve got more computer work to do before heading to the…dun dun dun…DMV. Wish me luck and more to come on my new marvelous life!

Are you a quick unpacker, or do you do it as you go?

What was marvelous about your weekend?