Asics GEL-Pursue: My Half Marathon Shoe!

I received a pair of Asics for the purpose of this review. This is not a compensated post and all opinions are my own.

Shortly after my review of JD Sports and the Asics I got from them, the Asics brand folks themselves contacted me about reviewing the Runner’s World Best Debut Running Shoe of Fall 2014 – the GEL-Pursue. I’d so far had success with my first pair of Asics helping my shin splints, so I was open to trying out another style. The GEL-Pursue is “neutral, but responsive”.

The ankle/heel definitely had plenty of that responsive cushioning, but the shoe itself felt very flexible and easy to move in. After just one three miler, I knew I wanted to try out a long run in these shoes. And after that one long run, I knew I wanted to run my first half marathon in them!

That long run that told me these were the right shoe!

My left shin splint issues have not gone away completely, but since I started using a calf sleeve and running in Asics, they’re sure a heck of a lot better. No more post-run throbbing pain in my shin, and since my half it hasn’t even been too sore. 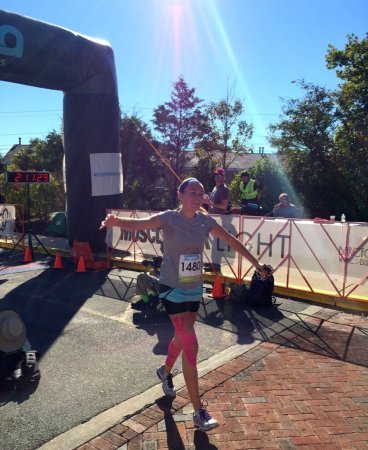 After crossing the finish line in my Asics!

Now I will be the FIRST to admit that saying I love a pair of shoes which retail online at $110, that I received free of charge, is not a 100% relate-able review. But I’ve tried out a LOT of sneakers, and have never felt this good running or working out in another shoe. I realize that one runner’s favorite shoe is not necessarily another runner’s favorite. But if you like a flexible shoe that has good ankle/heel support, and are in the market for a new running shoe, then I would encourage you to give the Asics GEL-Pursue a shot. They worked for me (and Kelly too)!

What kind or brand of running shoe do you prefer?

How much are you willing to spend on a good pair of running shoes?