I haven’t been up for doing much writing lately, so I’ve been fairly absent recently – my bad. But if I’ve learned anything, it’s that forcing myself to write is a whole lot more frustrating than letting this blog go post-less for a week or so. Good has been happening lately, but a whole lot of bad on the emotional front as well. Sounds like a prime time for Trade Em Up Tuesday. 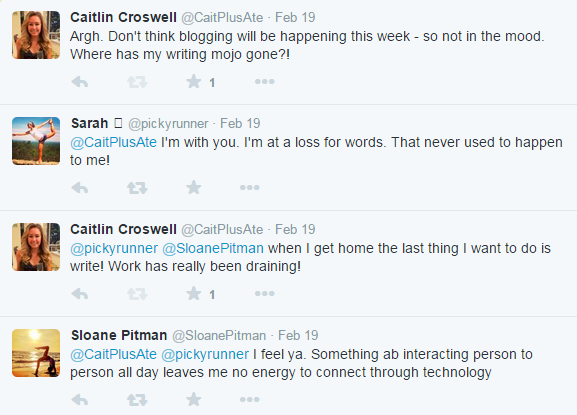 I would not trade…trying out a tasty new-to-me restaurant. Friday night I selected Marliave for a girls night with Jeannie and Allie. The menu looked super promising and I’m always down for starting my weekend with a good meal out. Despite some iffy service, we all really enjoyed our food and drinks! French restaurants do damn good French fries.

I would trade…taking too much advantage of an open bar situation later that night. It’s one thing to encounter free drinks that you have to ask for. It’s another when you encounter free drinks complete with a champagne flute that keeps getting refilled…without you having to do any asking. That plus eating a ton of chips when I got home later that night led to feeling both physically and mentally awful when I awoke the next morning. (I guess if I hadn’t eaten all those chips I would have felt physically worse, which I don’t want to imagine.) But honestly, I don’t remember the last time I woke up filled with THAT much self-hate. The temptation to be so so SO mean to myself was hard to resist, because I felt as if I had to be sure another evening of huge mistakes like that wouldn’t happen again. So much for not depriving myself on weeknights stopping me from overdoing it on weekends. 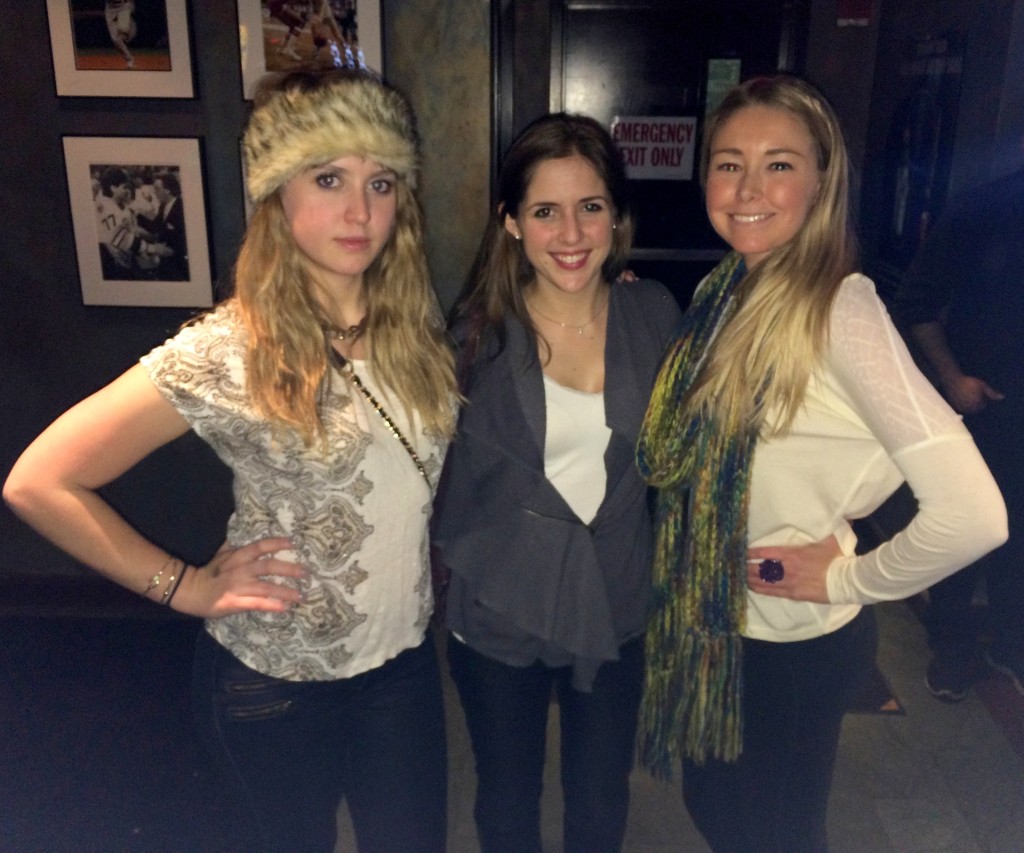 I posted this photo and one other on Instagram while I was out, but deleted both the next morning. I didn’t want any reminders of my “failure” staring me in the face.

I would not trade…a quick run. Thanks to a neighbor who’s marathon training, I knew where to find some clear sidewalks near my apartment. So I laced up my sneakers and hit the pavement, because all I wanted to do was feel a bunch of cold air on my face and still get in SOME kind of workout. Honestly, I saw that run more as a punishment. So I guess I should trade it. But I can only imagine how much guiltier I’d have felt all day – and believe me, I felt GUILTY all day – if I hadn’t run.

I would trade…that I’d decided to take Friday off from the gym. Because when I woke up on Saturday morning feeling super hungover, I knew I wasn’t going to get in the solid post-rest-day workout I had planned. I kicked myself for taking Friday off, especially since I totally had time to go to the gym, but was recovering from a cold and decided to play it safe so that I’d be prepared for Kat’s visit on Saturday. And honestly…I just DIDN’T want to go. My gym mojo has been waning and I cannot wait until it warms up so that I can start training for my second half marathon. Despite the fact that I went on a run when I felt super shitty, it still wasn’t nearly as much as the Saturday workout I’d originally had planned.

I would not trade…allowing myself to eat the food I craved. Once Kat arrived for her visit (and we found her street parking – a miracle), she accompanied me to Refuge Cafe so that I could get some stomach-soothing grub. At that point I’d done my run and been awake for almost four hours – I knew some tasty breakfast would make me feel better. It was really difficult to let myself eat. Sticking with black iced coffee would give me that high that hunger pains still sadly give me. But I ended up feeling pretty good about my food selection, and just like the weekend when Rachel and Steve visited, I felt a lot more satisfied after I ordered and enjoyed a breakfast (brunch?) that I really craved. 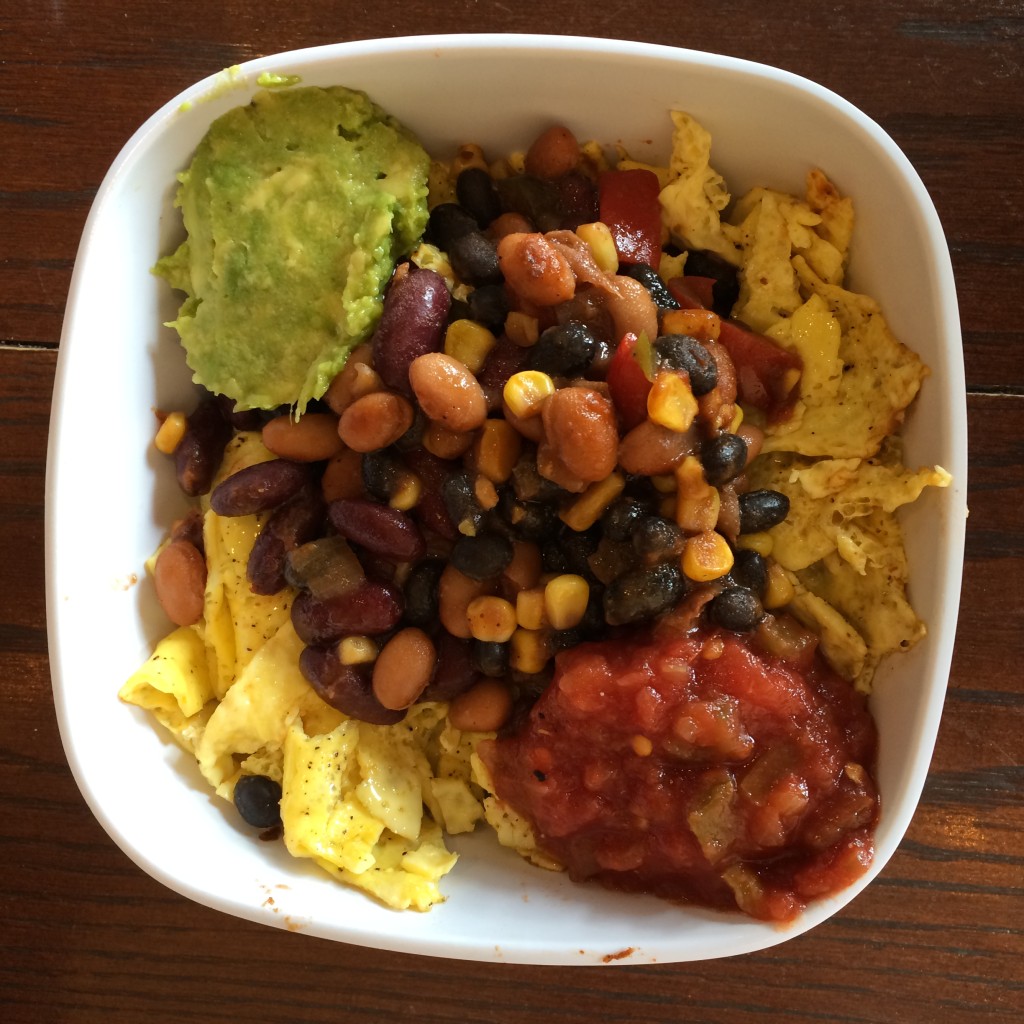 Breakfast bowl of peppered eggs, beans, corn, salsa, and guac – served on a bed of home fries. So incredibly tasty.

I would not trade…freshly painted and gem-tastic nails. Over breakfast Kat suggested we go get polish changes and I’m glad she did, because that did perk me up. A trip to the nail salon is an often-necessary component of any girls weekend!

I would trade…letting my anxiety get in the way of enjoying time with my visiting friend. I felt distracted and disconnected from my surroundings all day, unless those surroundings involved anything to do with calories. How many was I consuming? How many had I consumed the night before? How much extra walking could I work into our day so that I could burn off extra? We had a good time and visited some fun spots, plus hung out with Jeannie and Allie. But I was never fully there, and the evening ended with me tearing up in a restaurant and asking Kat if we could just go home and call it a night. I was asleep by 10. 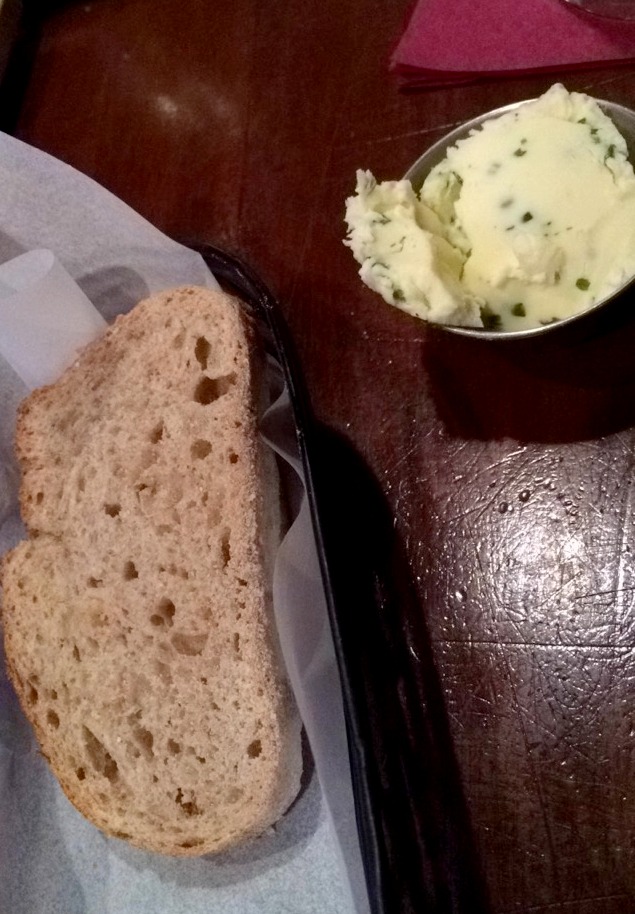 We actually went to Regal Beagle twice, once in the afternoon and once as our last stop. The first visit involved their infamously amazing butter with brown bread. 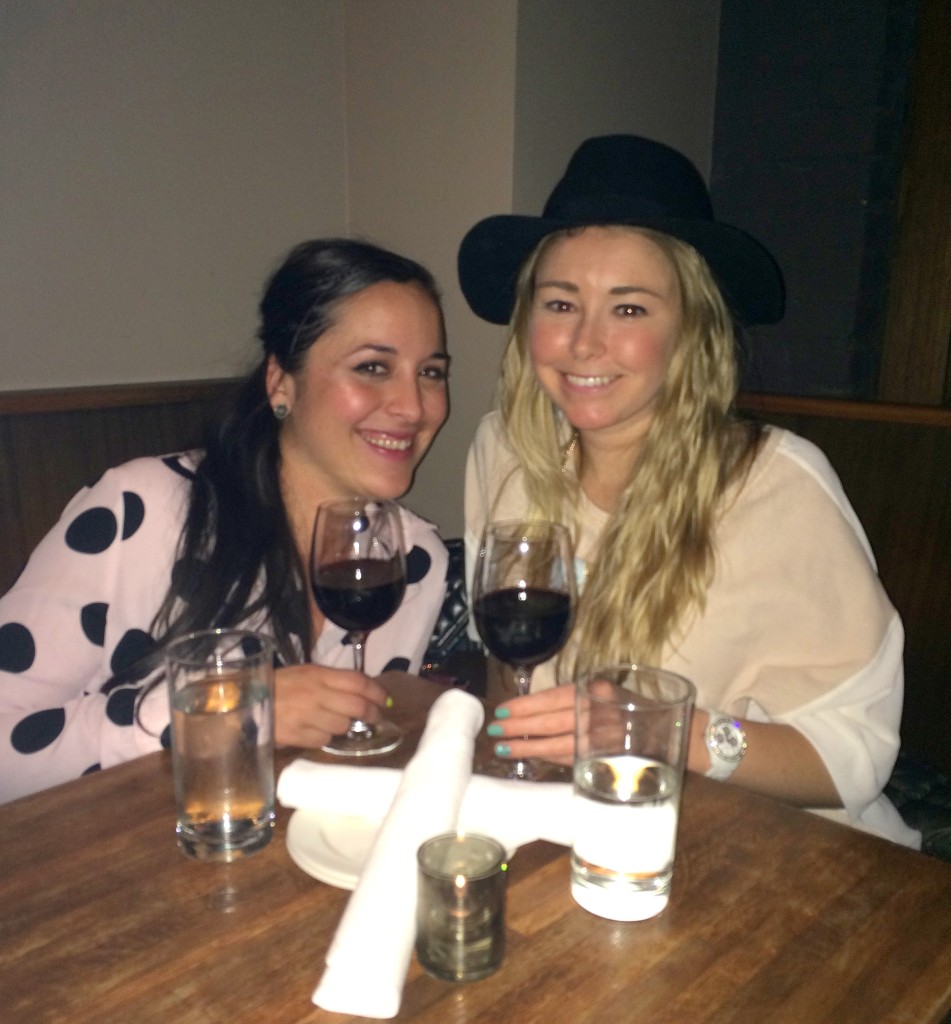 Kat rocking her new top, purchased earlier that afternoon at my favorite consignment shop Buffalo Exchange. Me rocking my favorite hat. And both of us rocking Malbec.

I would not trade…finally getting to try CorePower Yoga! A location opened near my apartment and they offer the first week for free. Kat and I both wanted to get in a good workout Sunday morning, so a free class for both of us sounded like the way to go. We checked out the Heated Power Yoga with Weights, and I’m so glad that the class ended up being more like a bootcamp peppered with yoga moves than a yoga class. I really needed a physical challenge! I hope to make it over there at least once or twice more to take advantage of my free week, but don’t see myself purchasing classes. They’re pretty darn expensive, especially for someone who already pays $60/month to belong to a gym. Plus if I went to CorePower too often, I’d also end up spending a fortune on their adorable clothes, including offerings from Spiritual Gangster.

I was eyeing this tank, but am way too cheap to spend $48 on one!

I would trade…dropping my brand-new NAKED palette and “shattering” the bronzer, highlighter, and blush inside. It took a long time for me to allow myself to spend the money on that thing, so I refuse to replace it. But all that cracked dusty makeup looks pretty sad in there now. But I did find this fix-it tutorial so maybe there is hope.

I would not trade…finishing up True Detective. Had to watch those last two episodes on Sunday afternoon while it was daylight, because that show did get REALLY creepy. Now I need to find something new to work on. I have several shows on my to-watch list, but does anyone have any suggestions? I’m curious to see if your ideas align with what’s on my list!

Time to move on with my week. I have therapy tomorrow night and am really hoping that helps pull me out of this funk that I seem to have been stuck in for awhile now. I still haven’t had luck in starting any new hobbies – just sticking with my coloring, but have been researching classes at the BCAE. The problem is doing things on weeknights exhausts me, and my next few weekend days are all booked up. So I may have to wait for the next round of classes to be released.

Do you ever get so stuck in your own head that you can’t get out?

Do you ever find yourself using exercise as a form of punishment?

One Response to "Weekend Trades"