Helping a Marvelous Cause

It’s time for a special Marvelous In My Monday (MIMM) in celebration of a marvelous cause! I blogged on Friday about my plan to participate in this past Saturday’s 2013 Hartford NEDA Walk (the second ever) as Team Caption of Team Amazing Me. I’m proud to share that we raised the fourth highest amount of any team – a grand total of $595.00 if you add in day-of donations that aren’t showing online. Currently the Walk website shows over $28,000 raised, which may not be the $35,000 goal, but I have not yet seen a grand total tally that includes day-of registration and donations!

Be sure to join Katie’s link-up and share your marvelous!

I can’t express enough how thankful I am to my parents and friends for putting aside time to walk with me, and to anyone who donated. As my mom said, it’s a shame we even have to have a walk for this, but it’s eating disorders are an important and prevalent issue that cannot be ignored. Participating only made me more excited and anxious to take on more advocacy efforts. I even signed up to receive advocacy action alerts!

Penelope surely wins the award for tiniest team member, and also the happiest! Kat is already taking steps to teach her self love and raise her in an environment of acceptance.

Sponsors had booths set up and were giving out educational materials as well as information about treatment programs/options in the area. 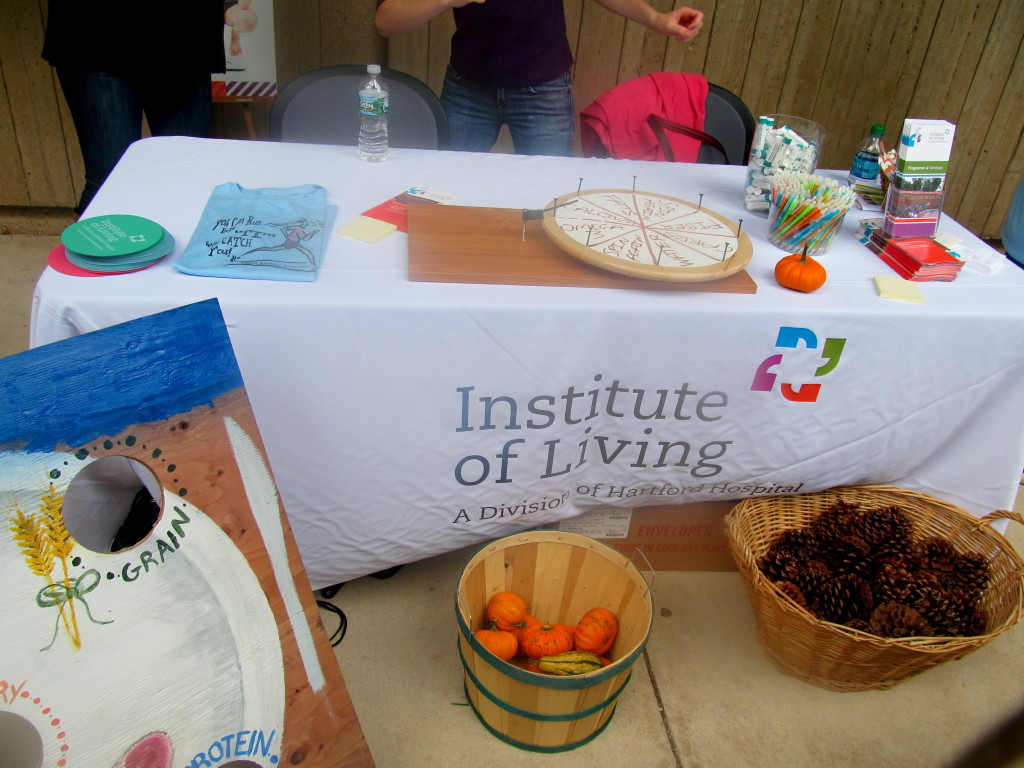 Though I’ve never been in a treatment facility, I’ve heard amazing things about The Institute of Living‘s programs and have considered entering them in the past. 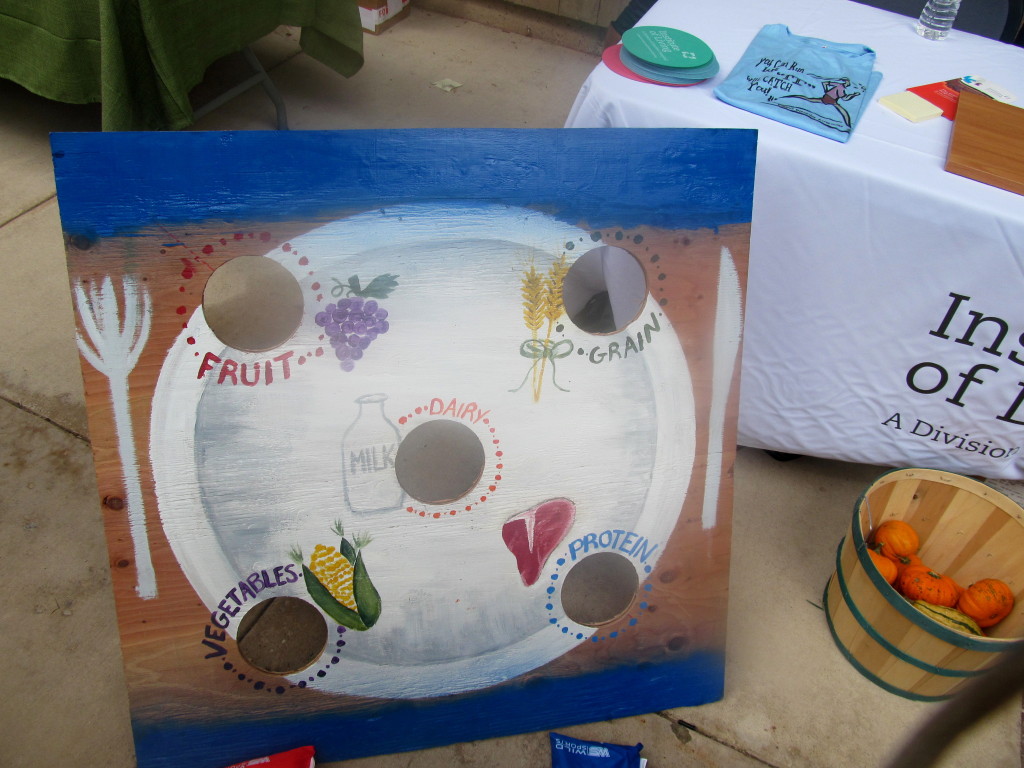 Kat helped Penelope decorate a hand mirror at the below craft table, so that she could use it to tell her self how beauuuutiful she is! 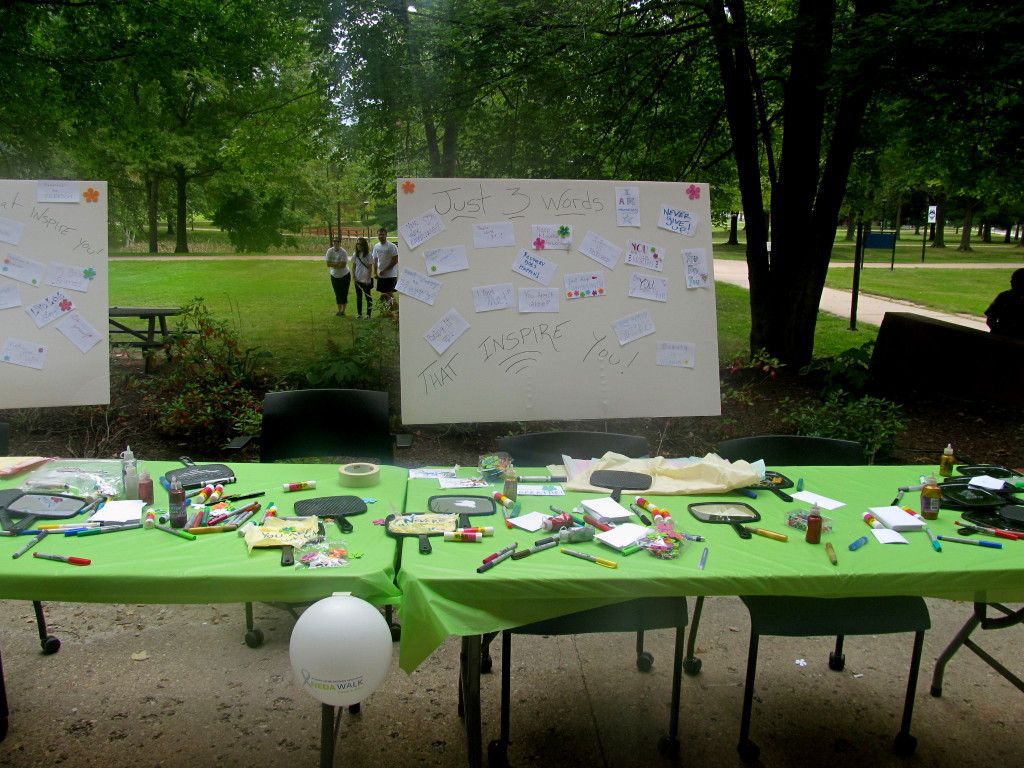 The walking itself took up not much time of the event – just a couple of loops around the campus green. Promptly at noon, we were welcomed and introduced to organizers Mary Curran and Cyndi Gerrick. Mary actually commented on Friday’s post about the Walk so I found her later and thanked her for doing so and organizing such a great event. 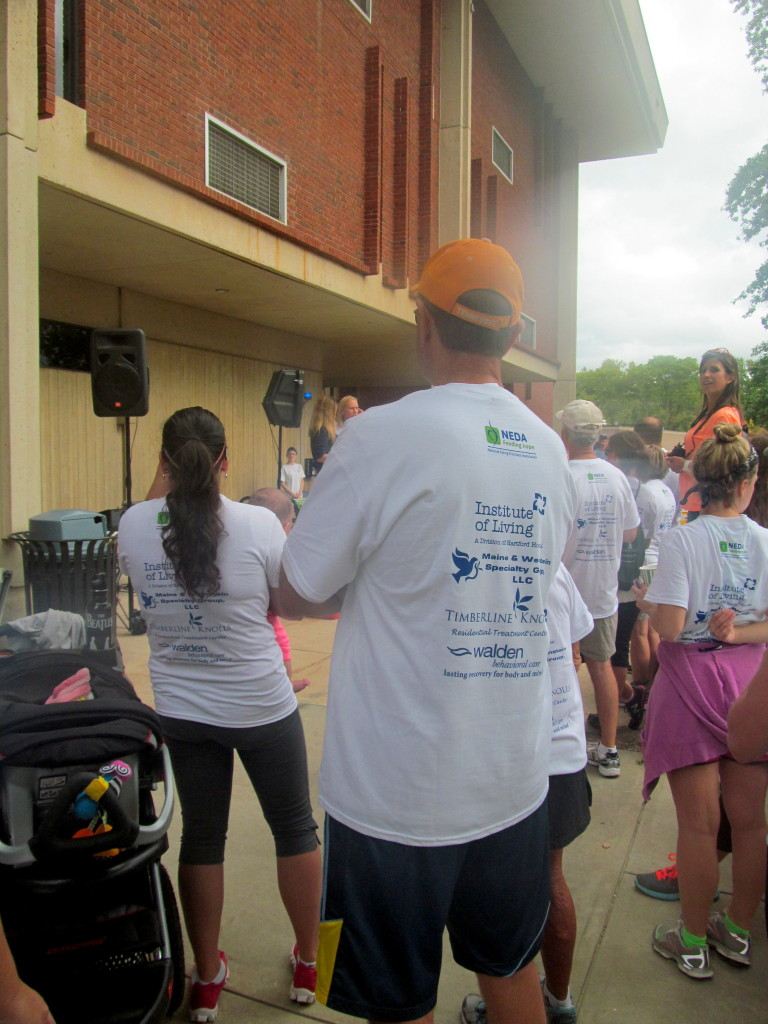 Of course Dad was reppin’ the Vols on game day. 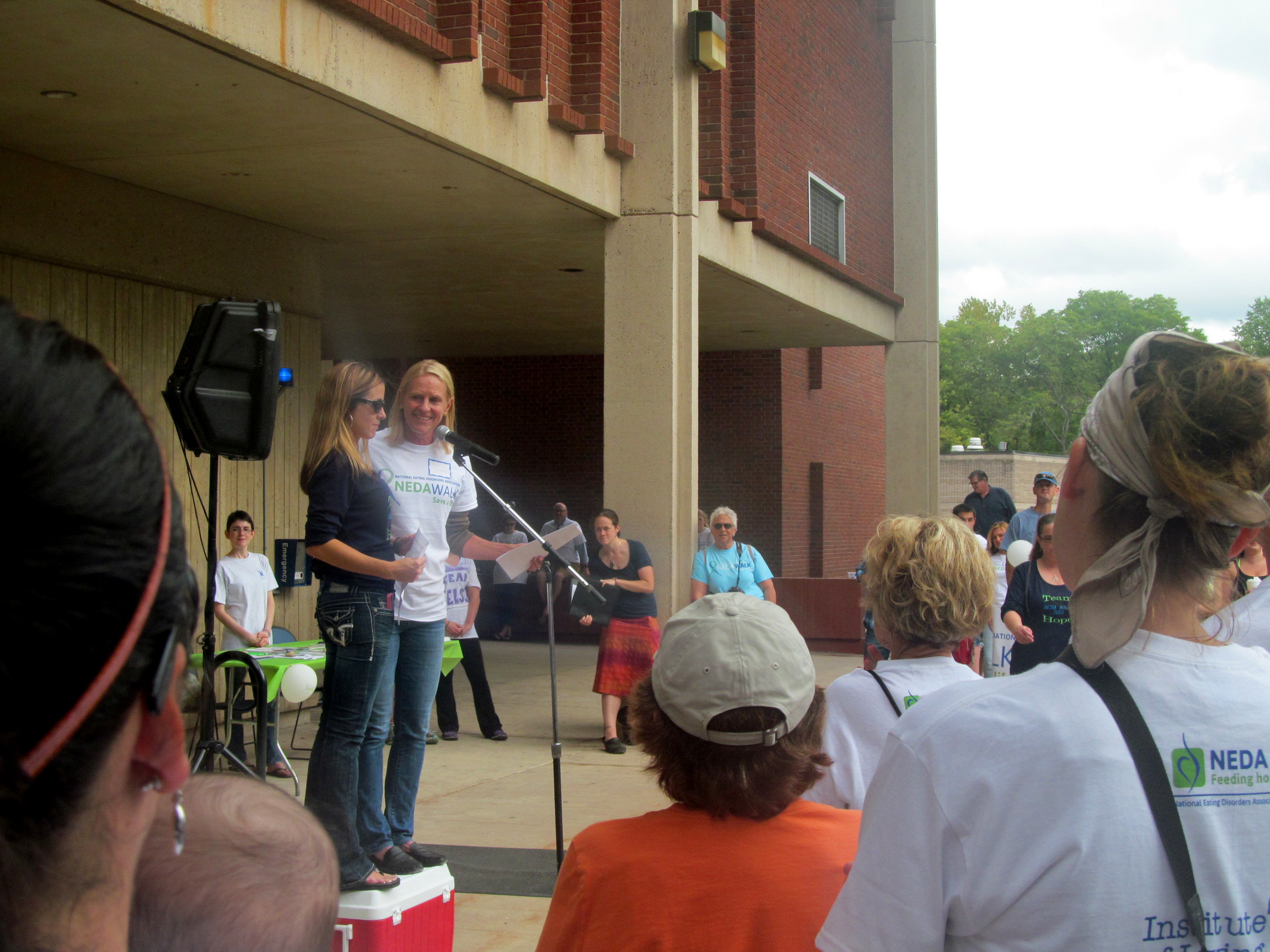 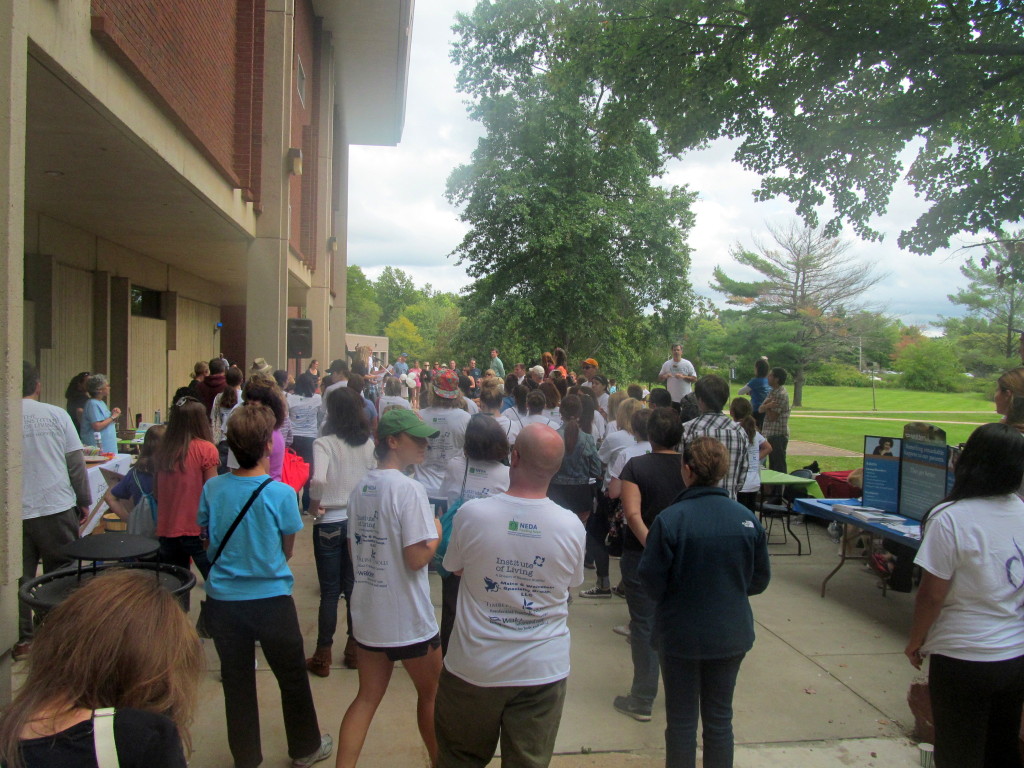 We listened to a moving story of descent into an ED, which thankfully was followed by recovery, from Elizabeth. I admire her for being brave enough to share in front of so many people. I don’t know if I could do it! Writing about an ED is one thing, but speaking in front of so many is another. 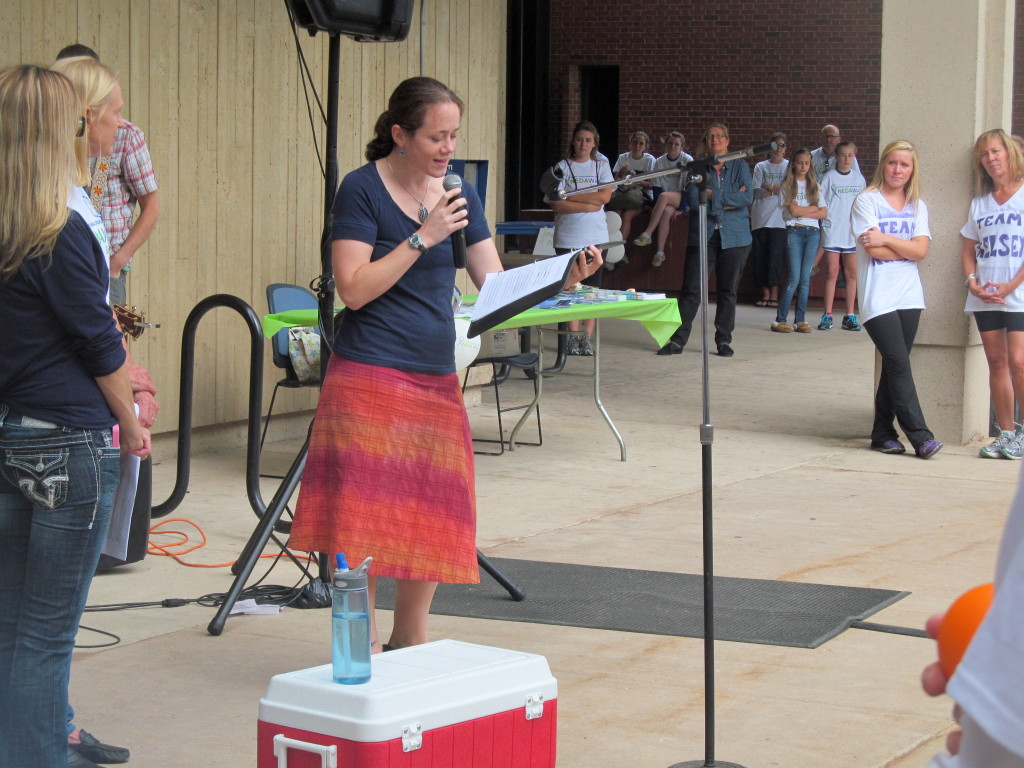 We also heard two original songs from singer/songwriter Todd Warren. He is also the Spirituality Coordinator at Timberline Knolls, a private women’s residential treatment center in Illinois. He uses music as a recovery tool and works with residents to teach spirituality (not necessary religion) so they can “become attentive to every wonderful possibility their unique beauty creates”. 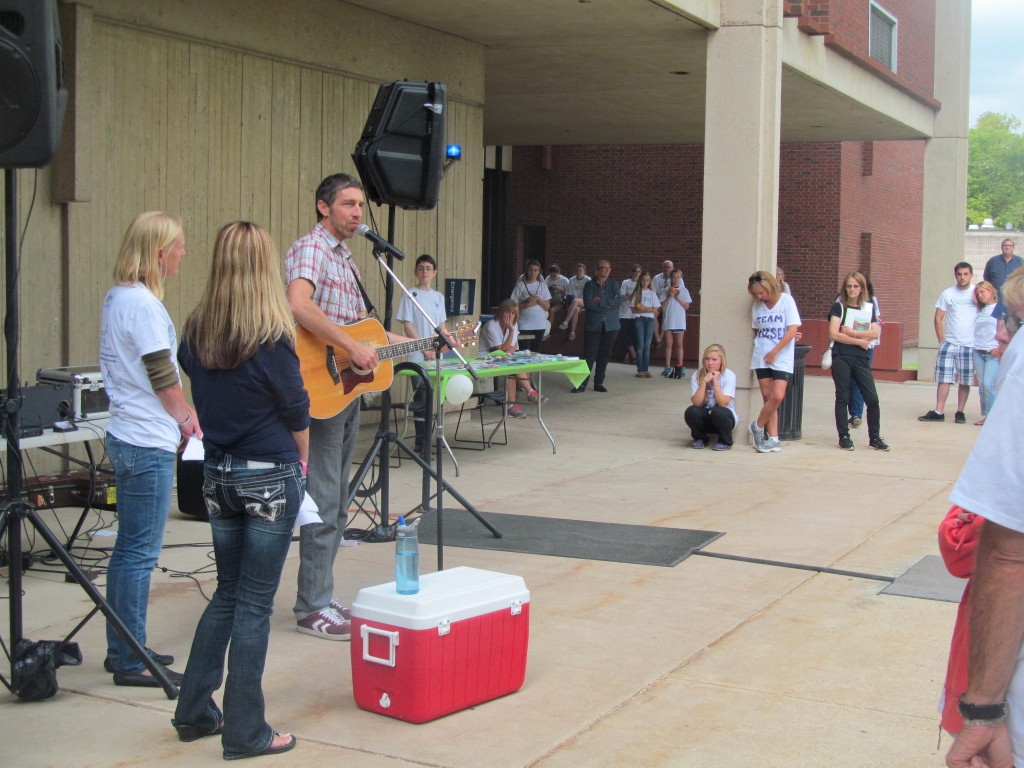 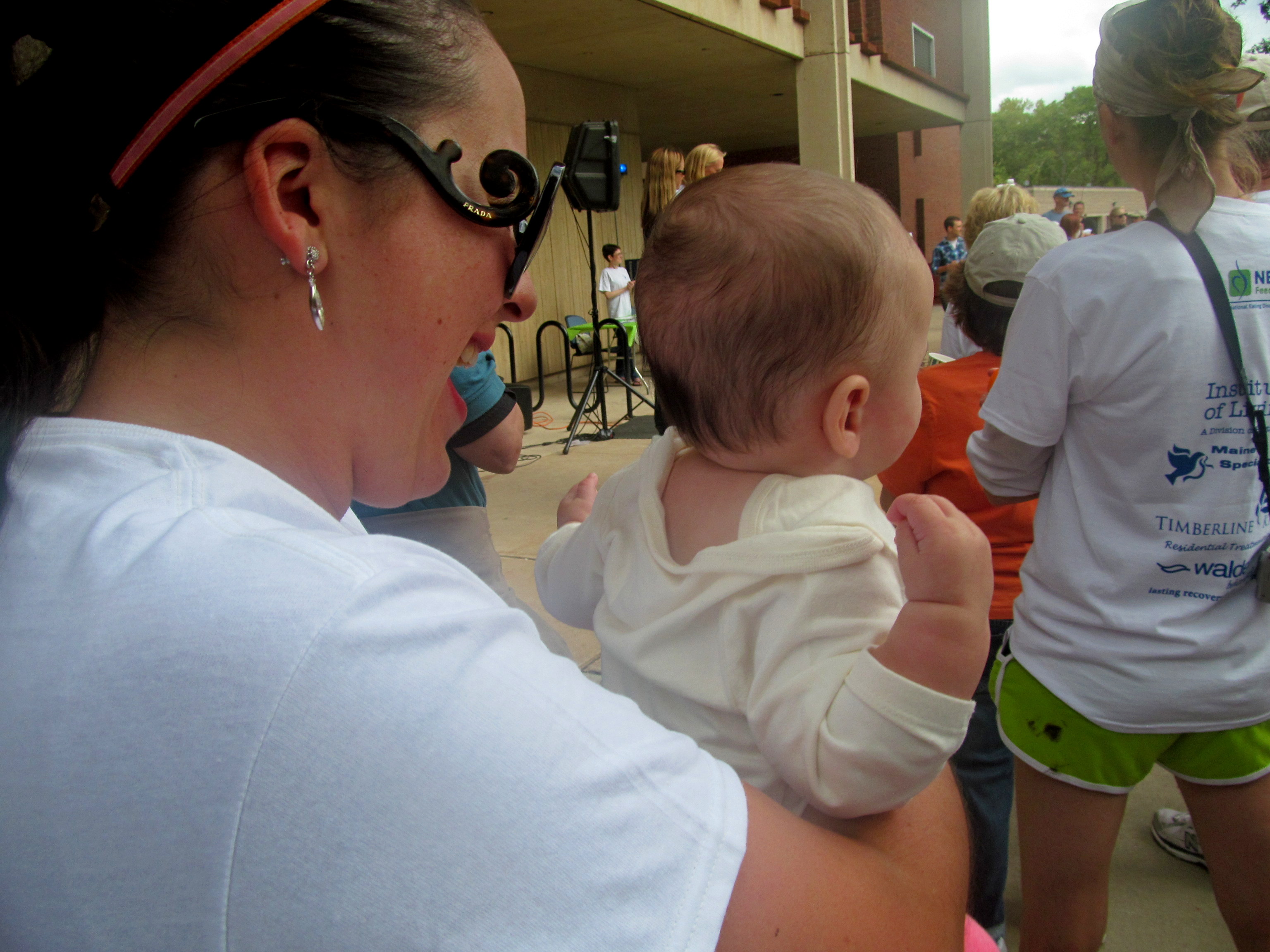 Penelope was singing along!

Right before the walk began, we were led by a yoga instructor in a breathing exercise. I thought that was a nice way to begin the walk itself since during recovery, deep breathing has been helpful in calming me when my mind gets moving too quickly in a panic. 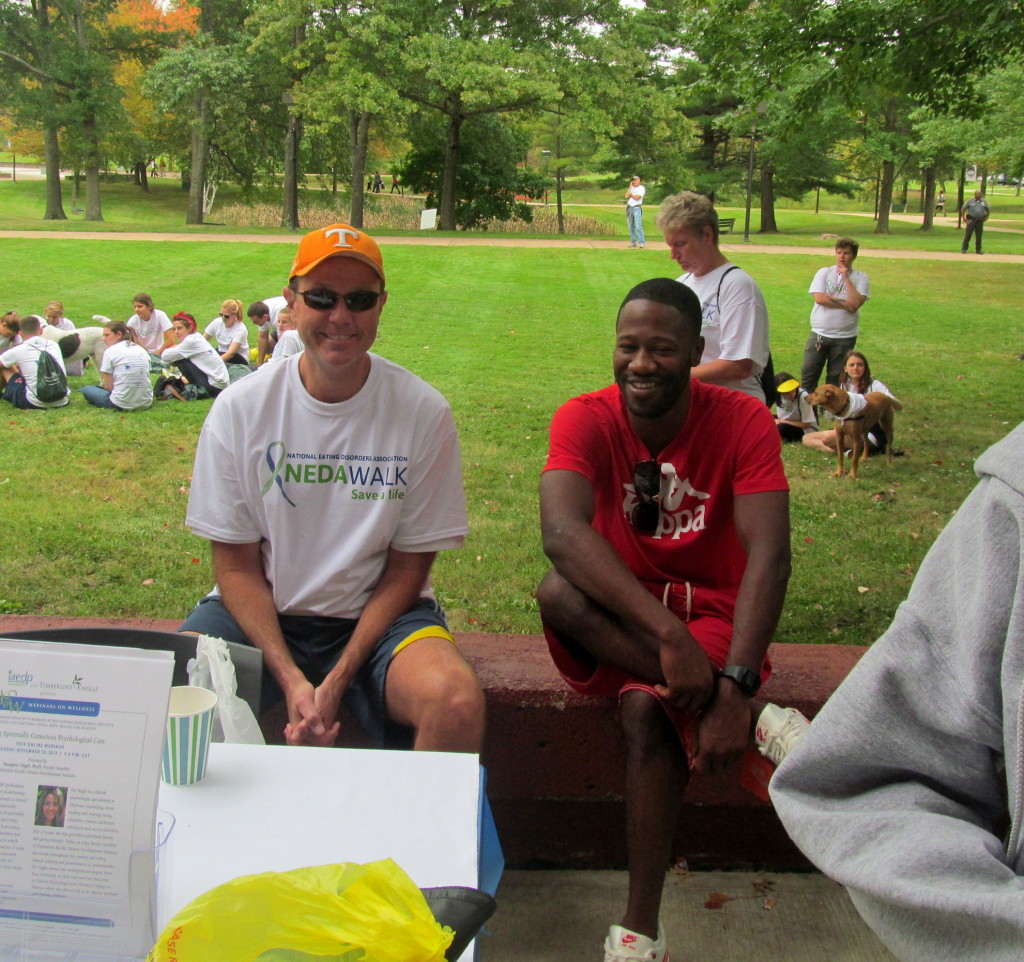 It was not exactly Jeff’s or my dad’s thing.

As we walked around the loop we read signs that had been set up along the path stating facts and statistics about disordered eating, diets, and body image. One that struck me the most is the fact that supermodels are thinner than 98% of the population. I’ve wasted and still do waste too much time aspiring for the body of a Victoria’s Secret swimsuit model. A body like that won’t make me happy and though that’s hard to accept, I’m trying hard each day to do so, and to keep statistics like that one in mind. 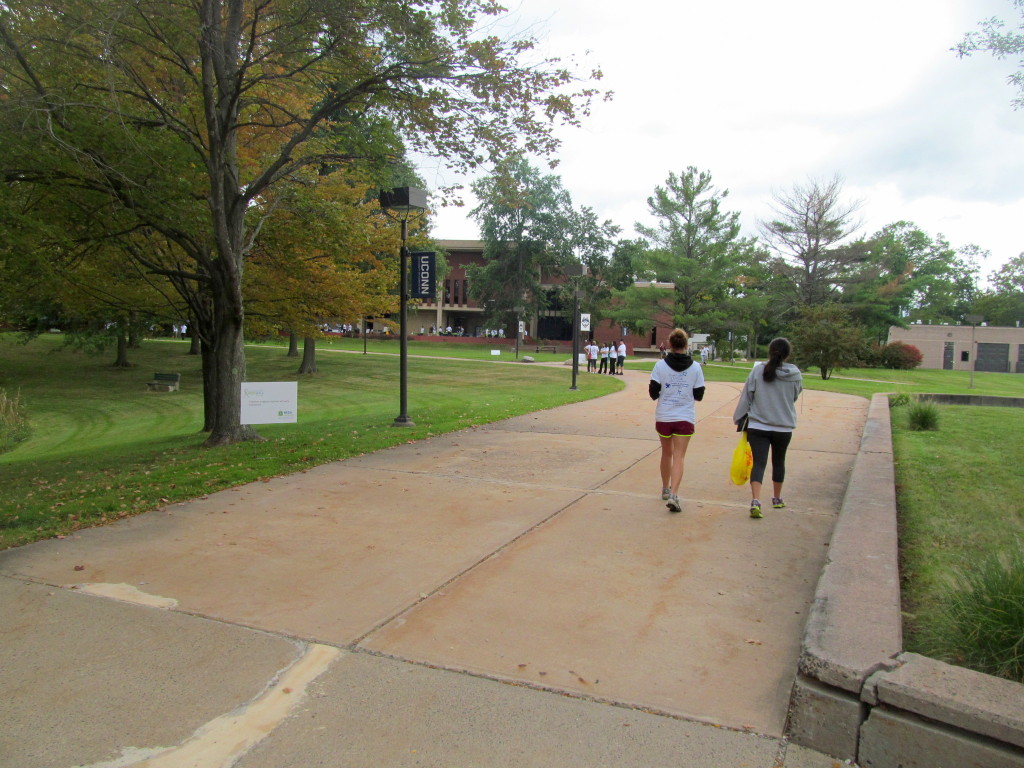 Olivia and Jill walking past one of the signs.

We did a few loops before calling it a day, and headed out because my dad had a flight to catch. It was a fun and special way to catch up and hang with my parents and friends – while helping others. 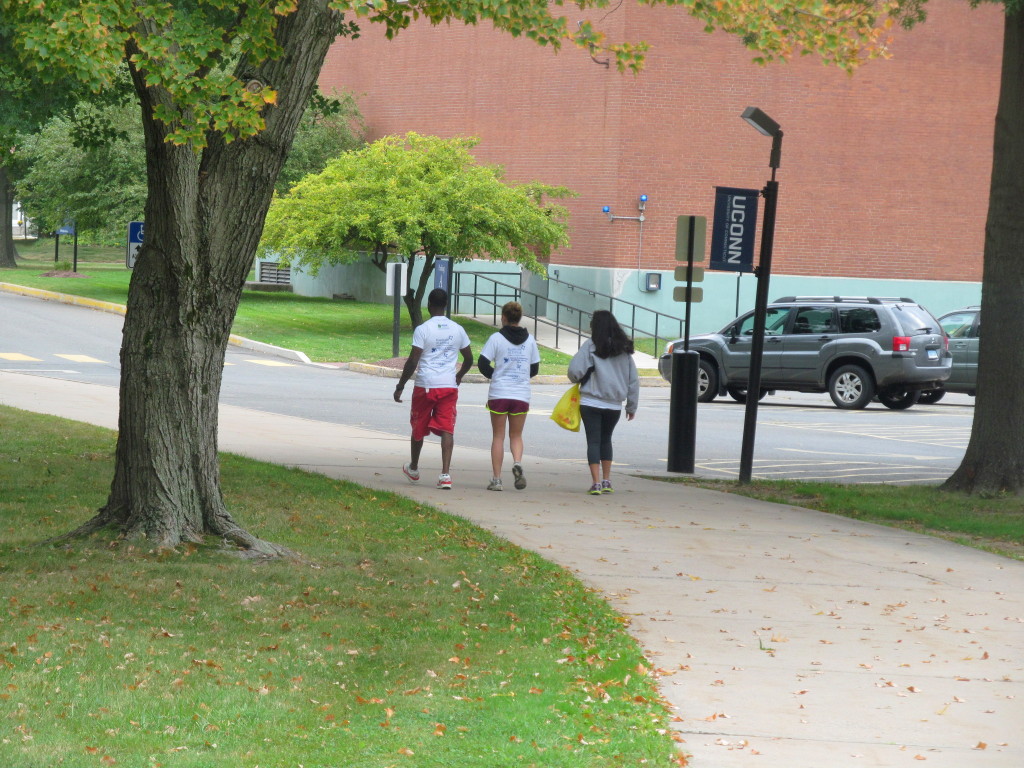 Jeff, Olivia, and Jill walking for the cause!

Penelope may not have done any actual walking, but her mama helped her complete the loops with the rest of us. 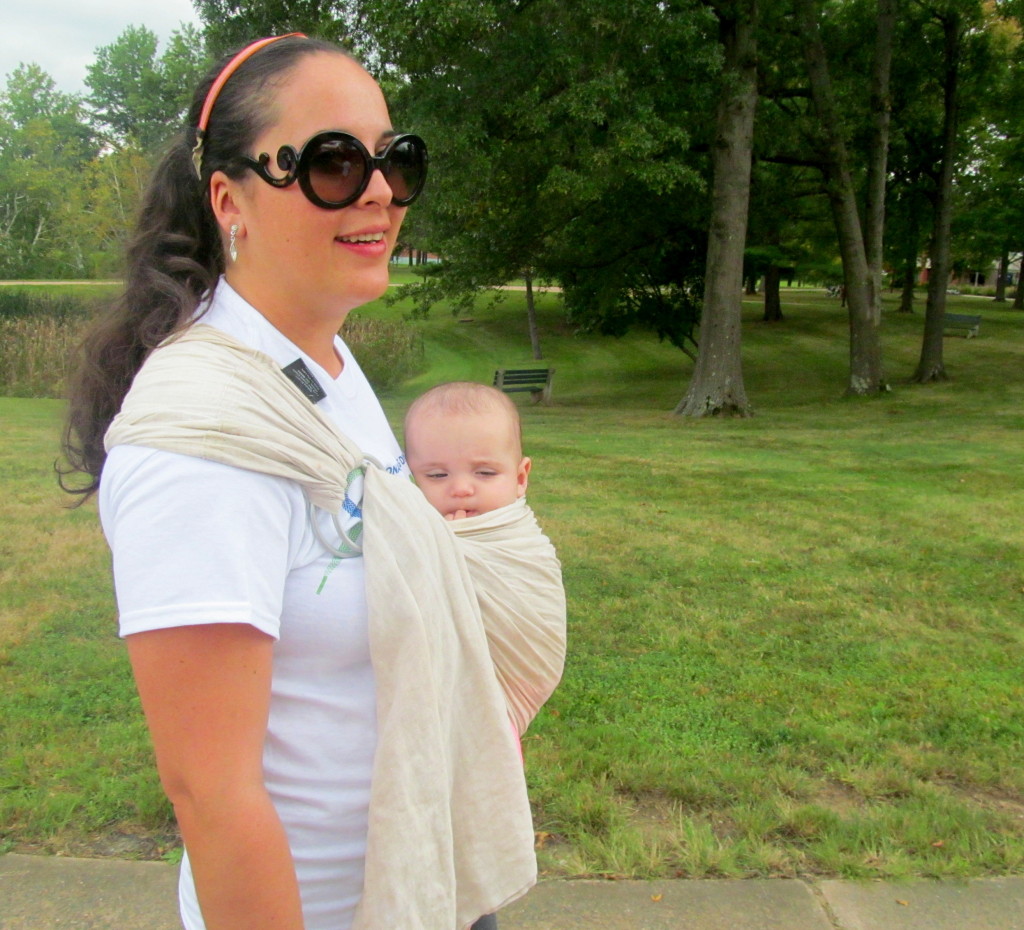 Can someone please carry me in one of those?

I’m glad that every participant got a shirt, not just the first X amount of registrants. It was more powerful to see everyone walking in their shirts!

Wearing it at work today!

I’m excited to do more for NEDA in the future and proud to say that I participated in the 2013 Hartford NEDA Walk –  we are…TEAM AMAZING ME! 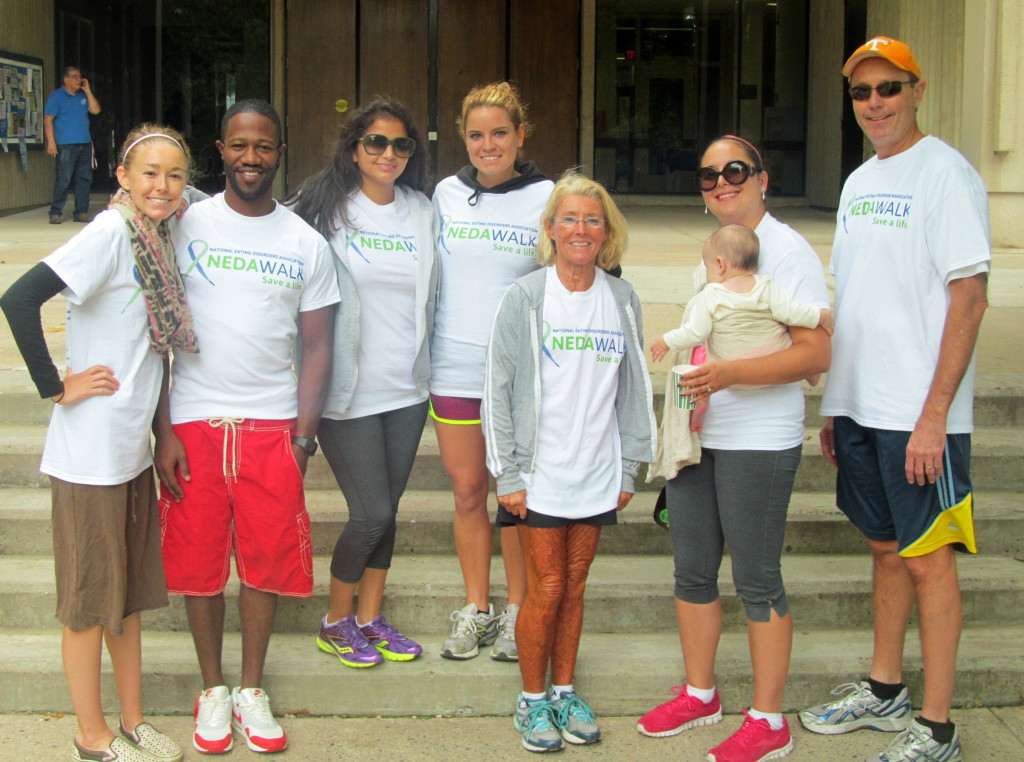 Have you ever captained a fundraising team?

Which charitable organization is closest to your heart?