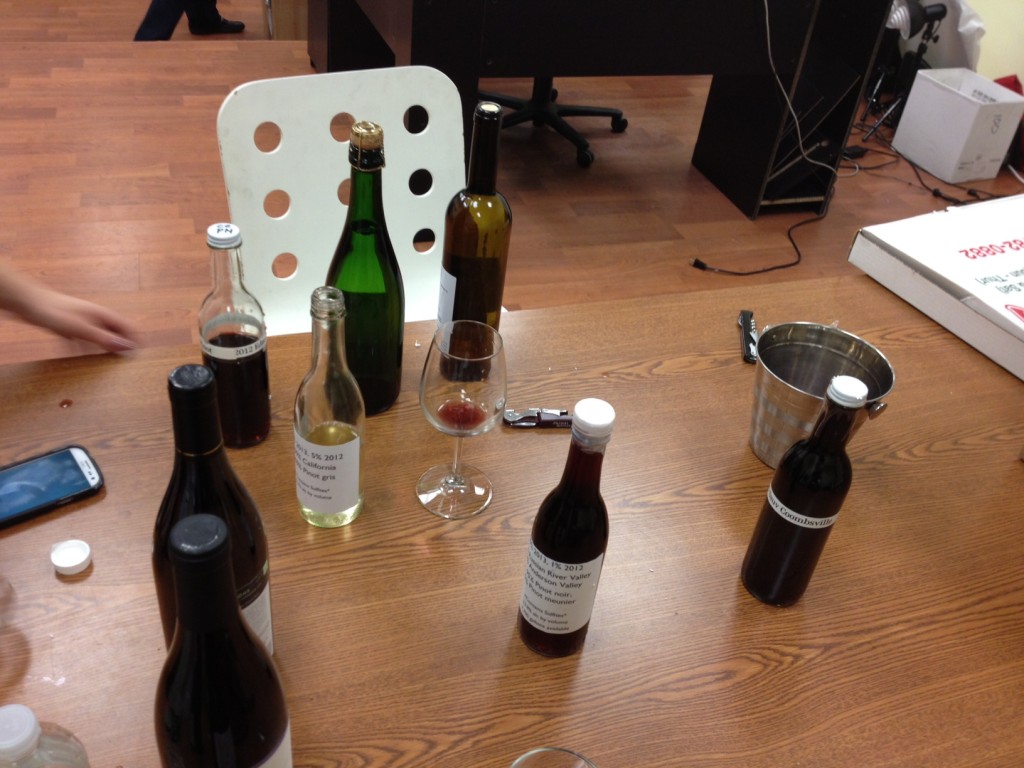 The company put me up in the marvelous Ames Hotel for the evening so that I could stay over and attend the post-meeting party at the company president’s apartment. This was my first boutique hotel experience and I sure hope it isn’t the last. I come from a Marriott-heavy family (we love rewards points!) and this felt like a whole new world. My room was clean, chic, mod, and had a mini intimacy kit in the mini-bar. Not that I used it…but that is so cool! The only downer was the person in the room next to me watching The George Lopez Show on full blast from 4-4:30AM…but a call to the front desk yielded a quick response and the situation was mended. 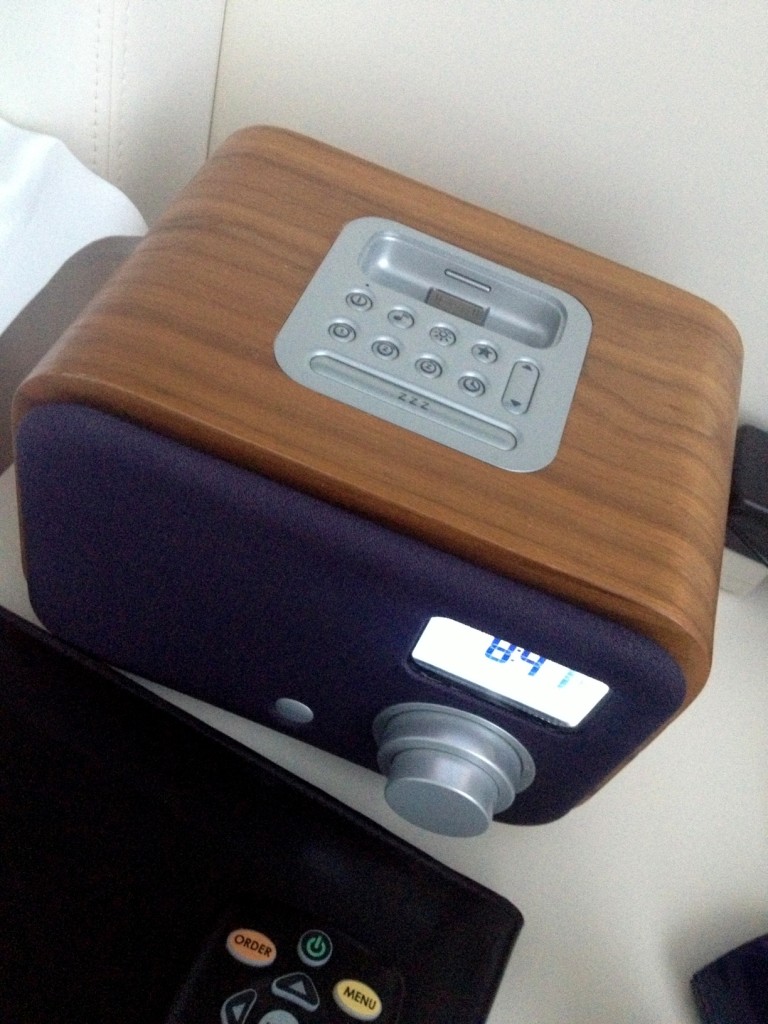 Very cool retro but not retro (because it’s an iHome!) clock. 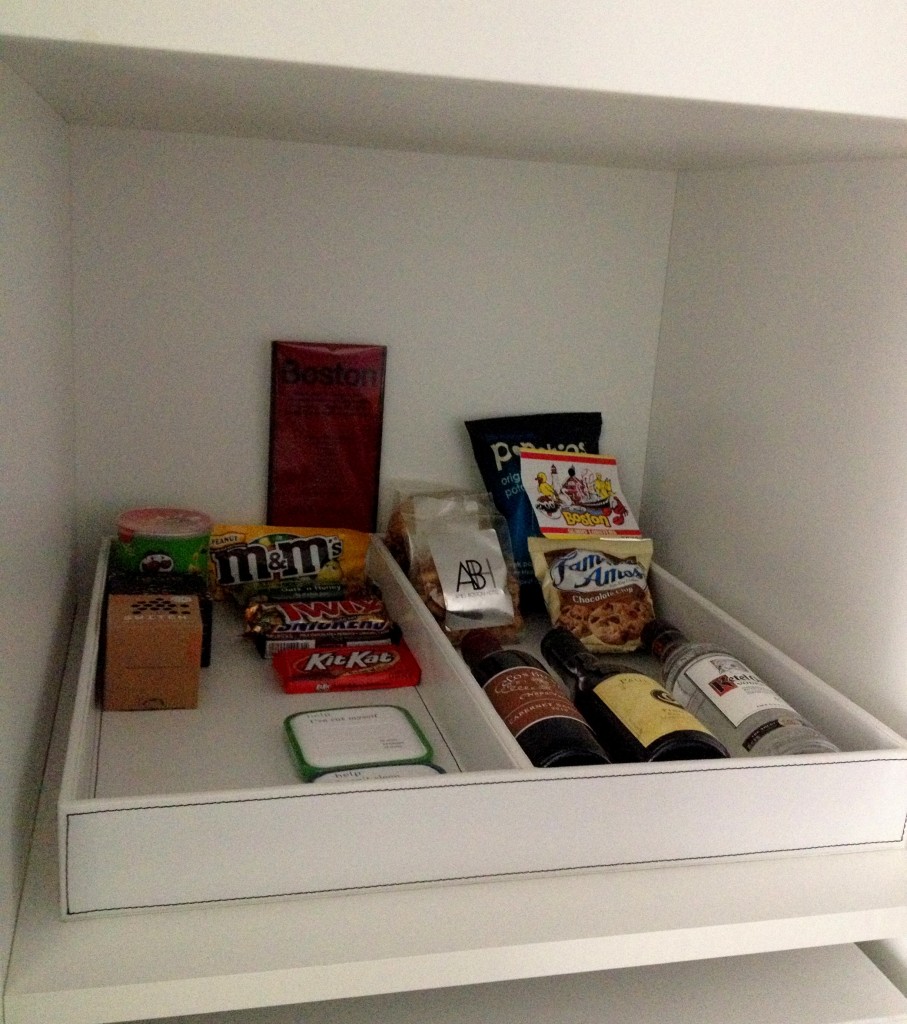 Now those are some nice sized bottles. 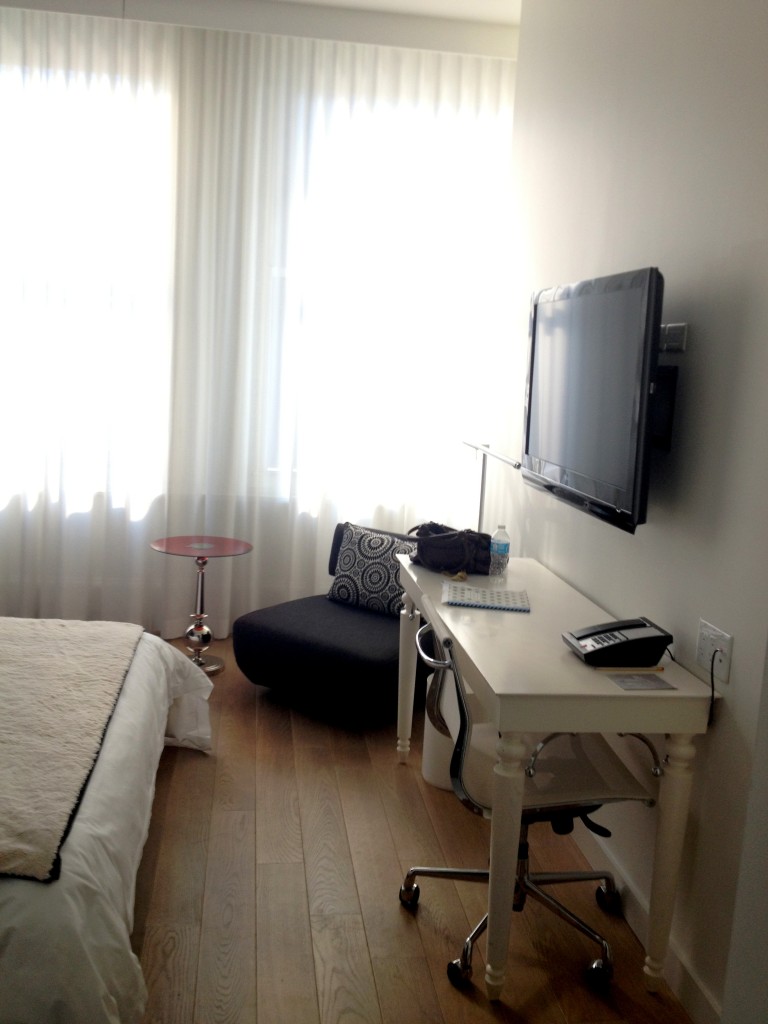 Watching TV from bed is something I don’t get to do at home, so it was blissful. 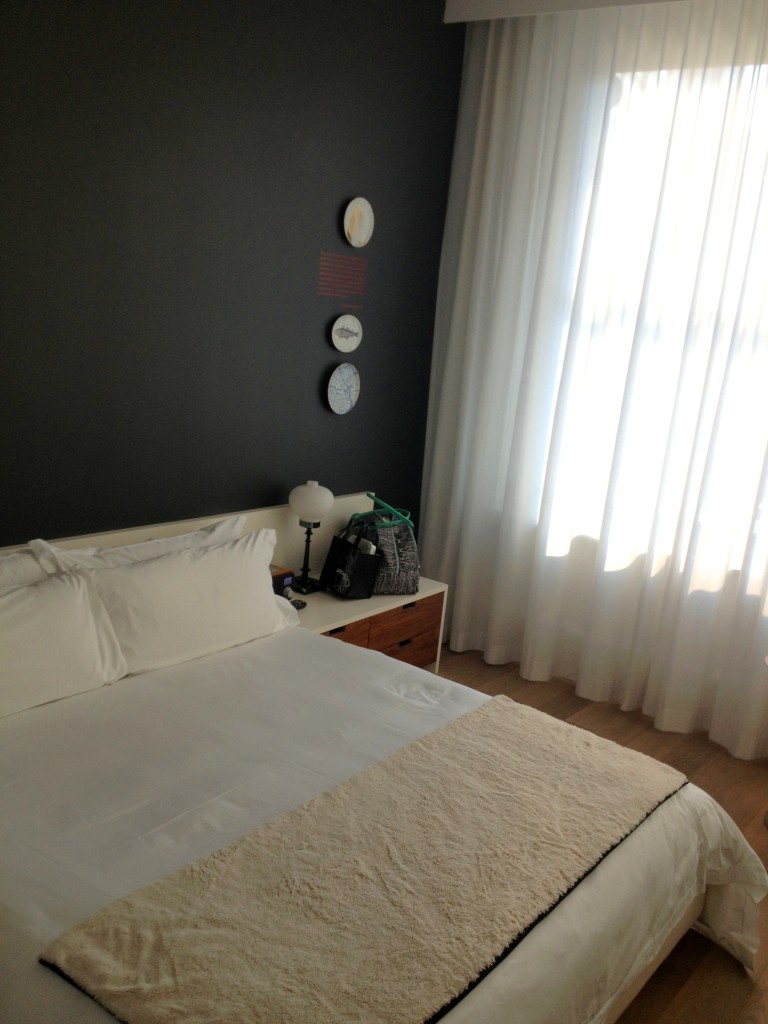 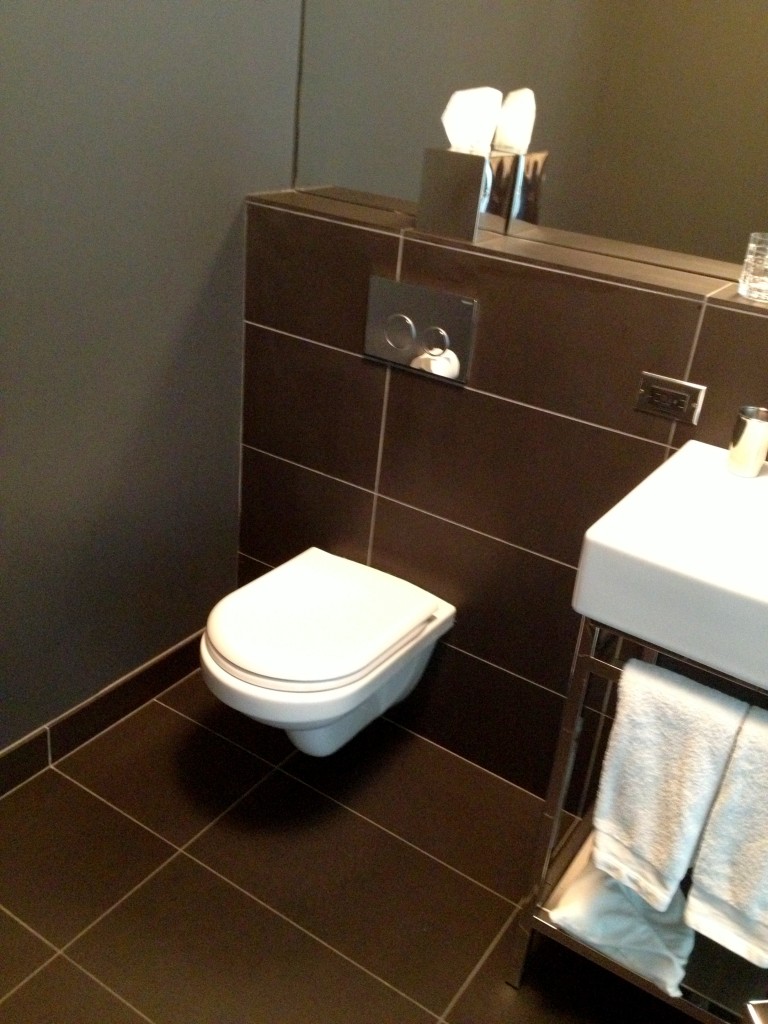 This toilet cracked me up. It’s almost like it’s floating! 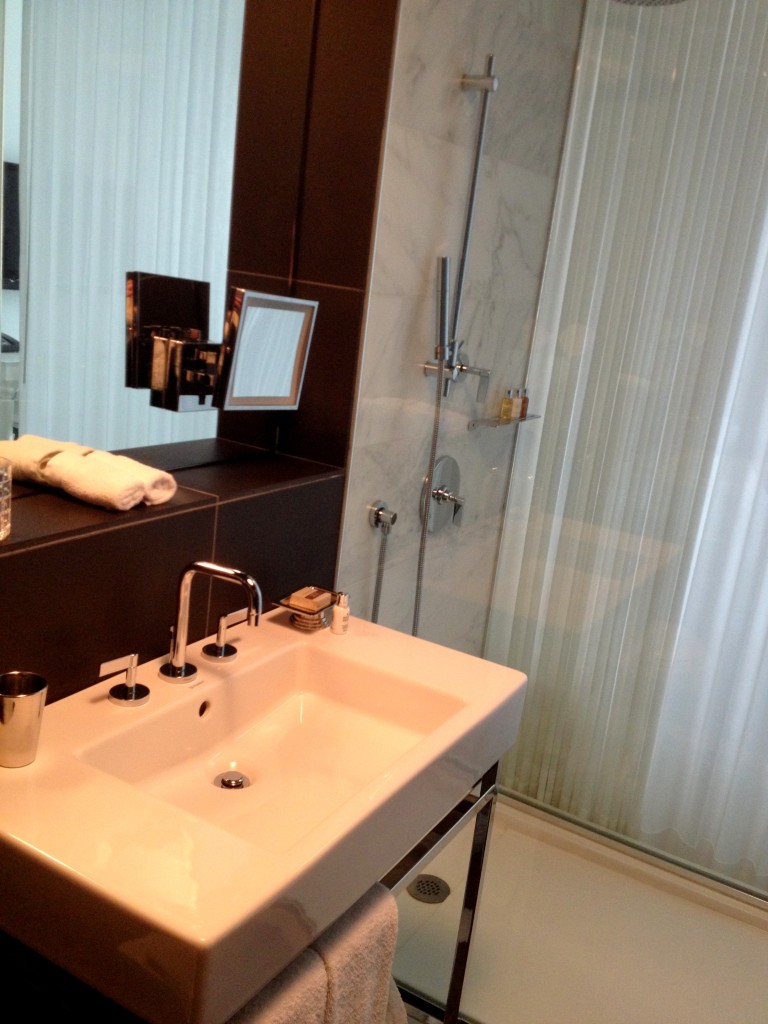 See that curtain on the other side of the shower? You can move it so that you can see the TV while showering. So cool.

I was able to bring a +1 to the company party (you can tell these new employers are marvelous folks, huh?) so I invited Greg! He rarely drinks wine so he let me guide him and pick out his beverages. 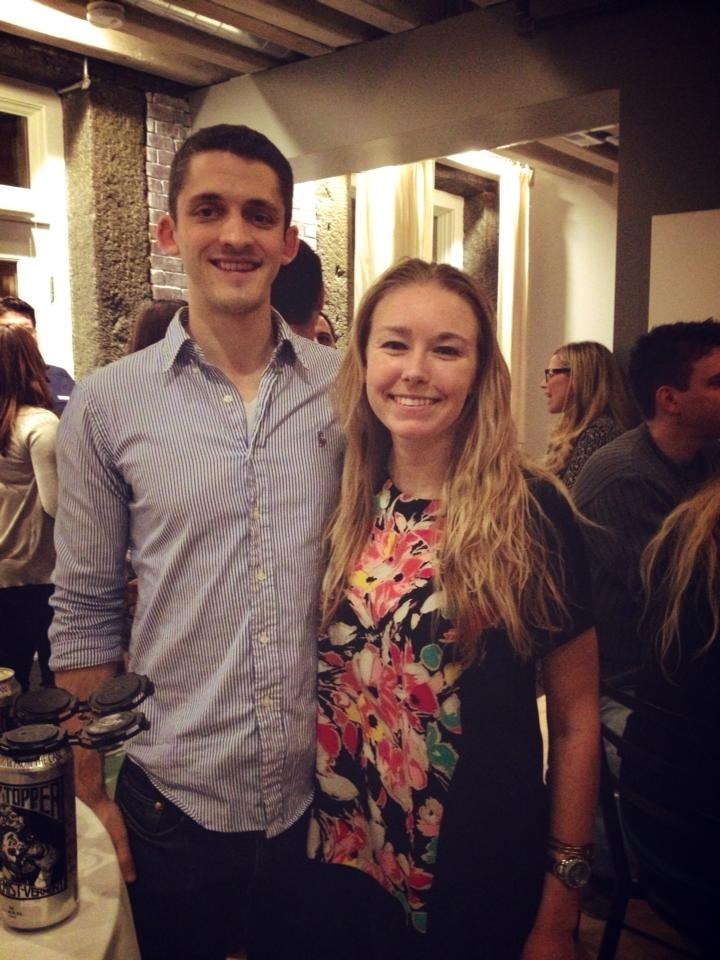 As usual everyone assumed we were dating.

See that beer can in the bottom left of the photo above? It’s called Heady Topper and is the only beer (I’m told) to get a 100 on Beer Advocate. But neither Greg nor I were that into it! 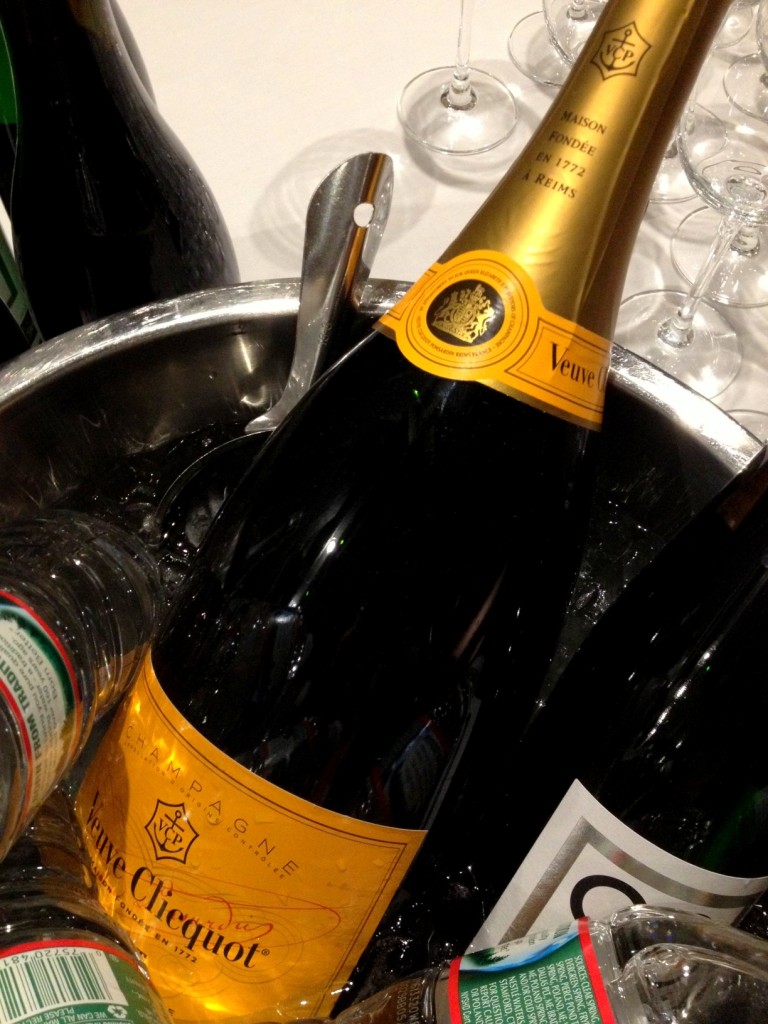 It’s okay, we had other marvelous options.

The party and beautiful apartment came complete with a marvelous catered meal. I didn’t get photos of the passed apps like cilantro-lime shrimp with avocado cream sauce (aghhh) or the eggplant latkes topped with roasted tomato (AGHHH) but I did get plenty of photos of the main buffet and dessert. 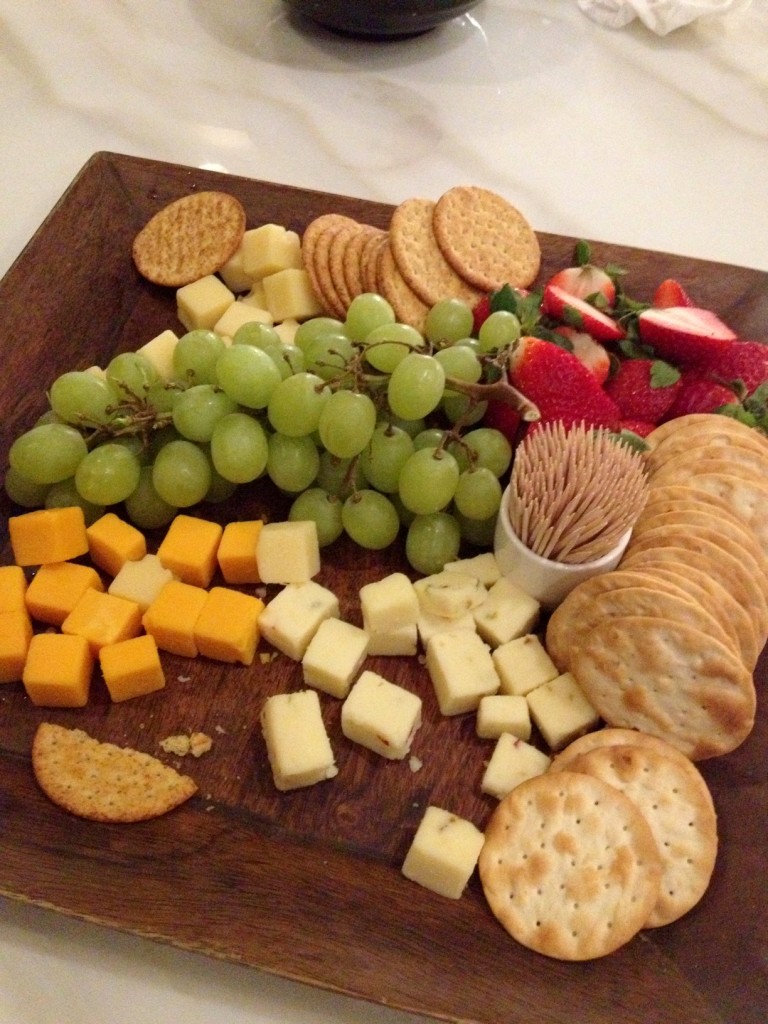 Cheese me! This was munched on before AND after dinner. 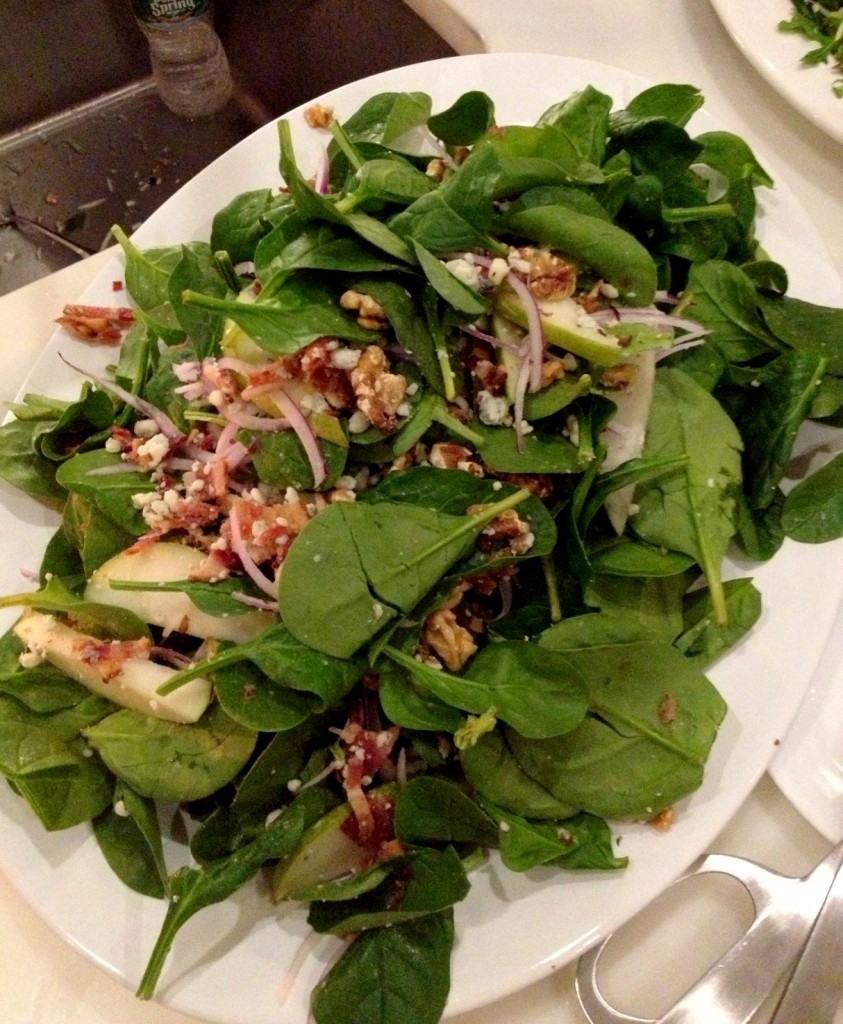 This spinach salad with walnuts, onions, apples, and bacon was TO DIE FOR. 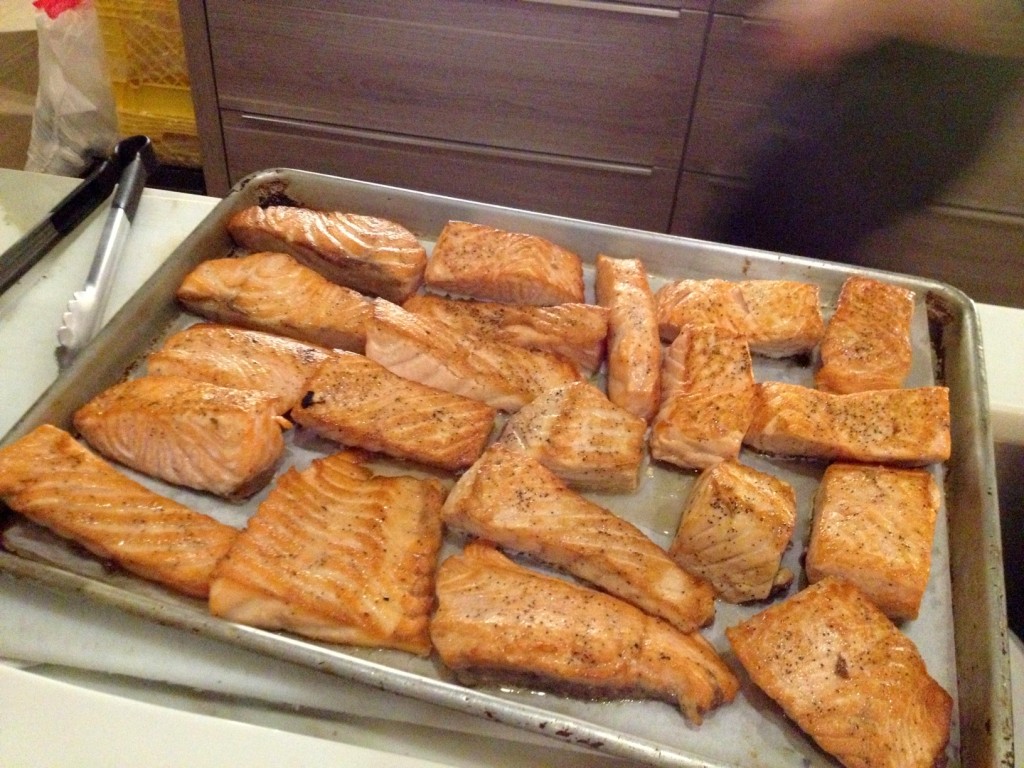 That fish being this marvelous salmon. Oh my gosh, it was incredible. 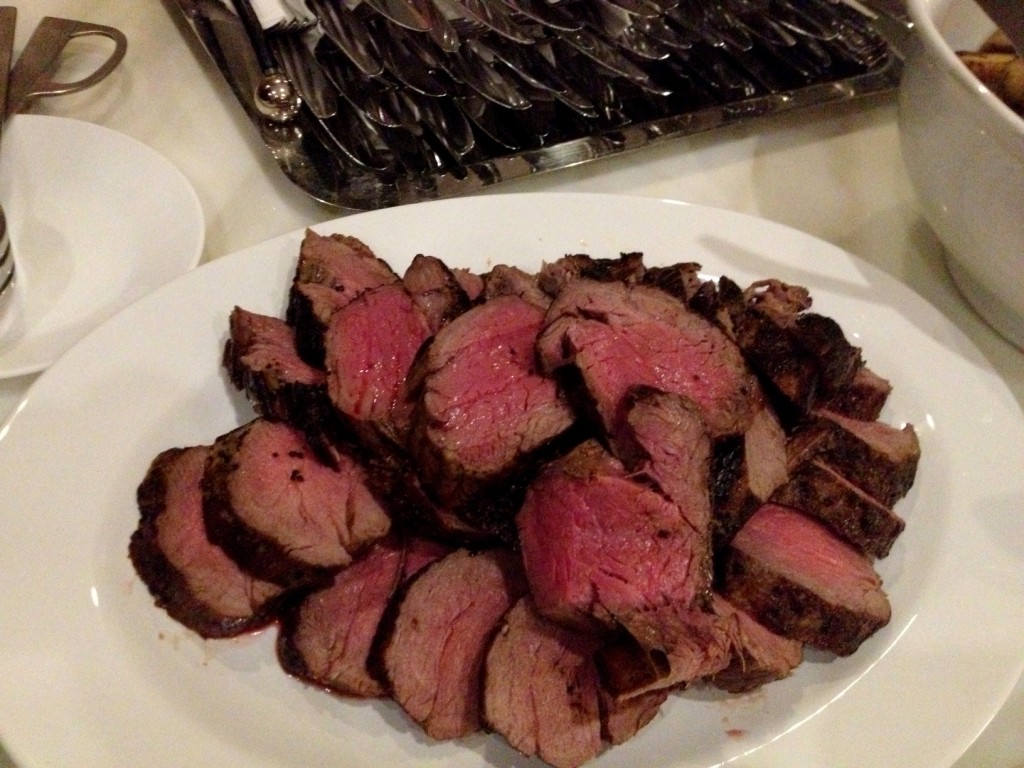 This marvelously cooked steak made me think of Kaitlin! 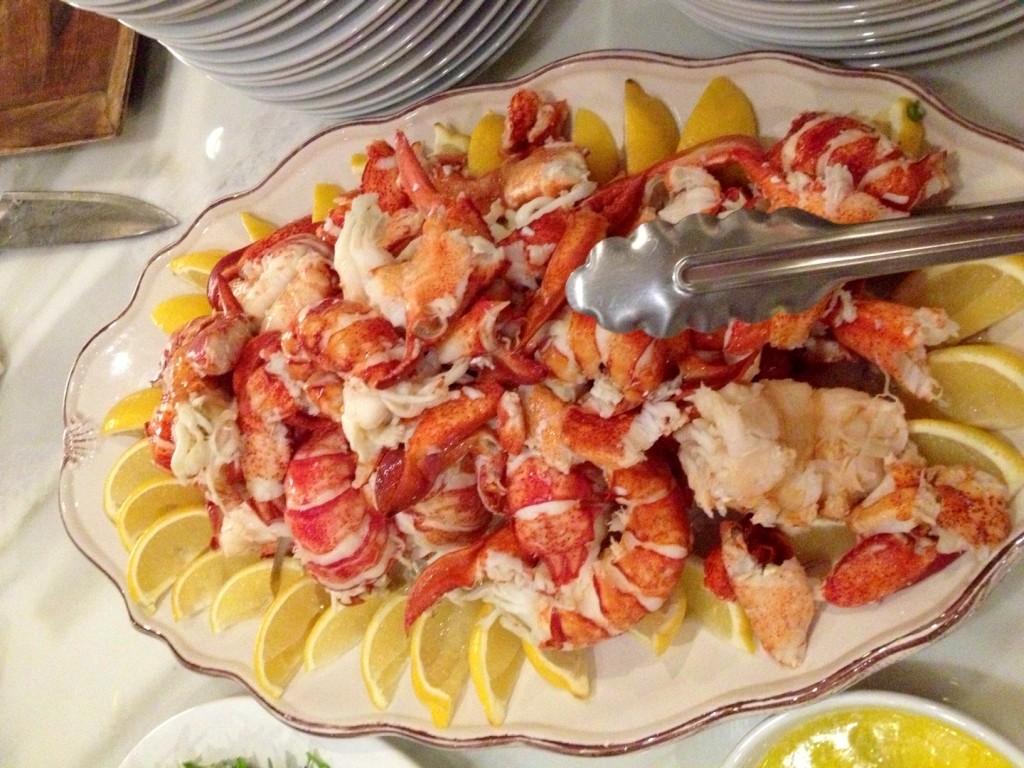 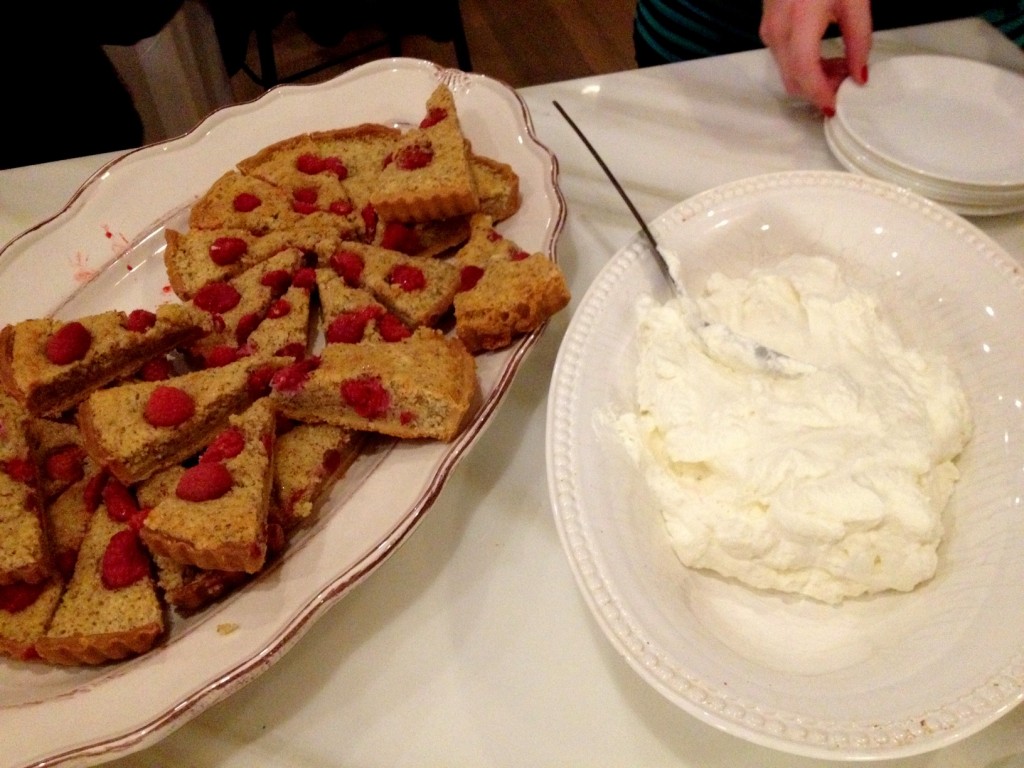 Raspberry crumble with homemade whipped cream. This was marvelous when paired with Riesling.

Greg left the party before I did but I was plenty comfortable with sticking around to get to know my future co-workers. Everyone was super nice and friendly, especially after the tequila shots got passed around! I don’t usually mess with tequila but when in Boston! 😉 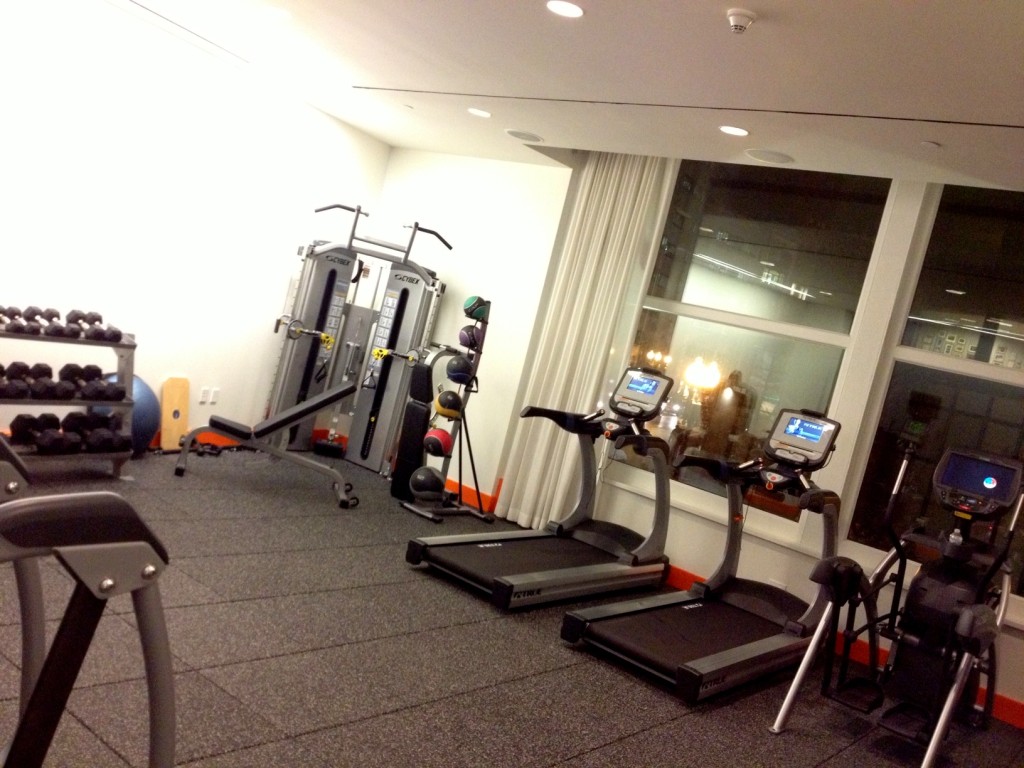 Perk of staying in a hotel instead of at a friend’s place…gym access!

I left the party right around when the attendees left to bar hop, because I had plans to hit the above hotel gym prior to the next day’s apartment hunting; I didn’t think staying out past 11 would be smart. I woke up feeling guilty about the food and drinks from the night before because I certainly drank more than I would “need” to and though I didn’t get too full, I didn’t stop at one bite of everything and definitely got fuller than usual. BUT I tried to actively give myself credit for getting up and making it to the gym. Given the events of the evening before, that’s pretty marvelous. My workout wasn’t – hotel gym workouts never are – but it was something. I alternated one song’s worth of treadmill running (fast) with one song’s worth of weights. After 45 minutes I’d gotten in a pretty good workout and felt more mentally centered so that I would be on my apartment hunting A-game.

Another way to stay on my apartment hunt A-game? A Whole Foods salad beast.

Oh apartment hunting. I saw so many places and thankfully all the real estate people I worked with were super nice! At the end of the day I decided to put in an application for a place that I felt, for the price, was pretty marvelous. However I’m hesitant to share more in case I jinx it, because despite the fact that my application is in, nothing is guaranteed. Someone else could have gotten one in before me! Let’s hope that’s not the case…keep your fingers crossed!

Another marvelous? Understanding friends. I was supposed to pay my first visit to Sorella in Hartford once I got back on Saturday night, but was so mentally and physically exhausted that I asked Kat if we could reschedule the dinner to last night. She was totally understanding and I was pleased to spend my Saturday eating leftovers, watching the Toned Up finale, and falling asleep by 9PM. Plus that meant I woke up early enough to take the 8AM Sunday morning Group Step, which felt extra-challenging since it’d been awhile since I took that class. Always great to switch up the workouts.

After my Sunday morning workout, I headed to Daybreak to work on blog stuff and was given a most marvelous and touching surprise. My coffee shop “crew” surprised me with a Highland Park Market fruit tart and a “Congratulations!” card to celebrate my new job. They’ve been listening to me talk about my career aspirations for weeks at this point so for them to recognize how exciting and huge this is for me was so moving.

I took my portion home to save for another time!

And that rescheduled dinner with Kat was pretty freaking marvelous. Amazing food, cocktails, and vino. I am so excited to share the full experience in a blog post this week!

Does your workplace ever have parties?

Have you ever been on an apartment hunt?

Have you ever stayed in a boutique hotel?