Thank you for the enthusiasm for Bestowed and my giveaway for one of their monthly boxes of healthy snacks! I’m happy to announce the winner, but remember if that person is not you, there is still the promo code “5OFFBESTOWED01”, which does not expire and can be entered at checkout for $5 off your first box (regularly $19). For just $14 (shipping is included) I definitely think it’s worth a try! Enough blabbering – the winner is Jess W! Congrats and I will be contacting you about getting your prize!

I hope everyone had a marvelous first weekend of June! Well, Friday night was still May, but that’s neither here nor there. The point is it FELT like June. The weather was perfect all weekend along and I couldn’t be more grateful! While I felt low during some portions of the weekend, today I want to address the marvelous, which thankfully far outnumbered the mal (Spanish for “bad”).

Thanks Katie for keeping us positive on Mondays when it’s often most needed!

END_OF_DOCUMENT_TOKEN_TO_BE_REPLACED

Man-oh-man, you guys love your Oakley shades! So many people entered the Sunglasses Shop giveaway for a free pair – thank you for the participation! Drumroll please, the grand prize winner is… 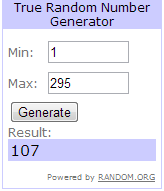 Karen M! Congrats and I will contact you for shipping info and your choice of shades (if different than the Dirty Dog Vendetta Fluro Pink 53215 Polarised you mentioned in the comments)! VERY cute choice BTW!

END_OF_DOCUMENT_TOKEN_TO_BE_REPLACED

I’m so excited about all of the entries I received in the giveaway for two Anchor Bay Entertainment cardio dance workout DVDs! The winner is…

Thank you to all who entered! I will be contacting Kristy to arrange delivery of her prize!

On Friday I promised you guys an update on the on-and-off nausea I’ve been experiencing for the past month, so I’m here to give you that today. Mostly, I want to focus on my first ever visit to a naturopathic physician. After finding out that the abdominal ultrasound I had done last Saturday morning showed no issues, I visited my regular doctor Thursday morning. She stated that she really think this is a stomach virus I caught that my body is taking a long time to shake, and told me that no doctor would order an endoscopy on me (the next step in testing) until at least a couple more weeks had passed with me having symptoms, especially since I have been “functioning” and it is considered a “procedure”. Yes, I’m functioning, but I have also been very physically and mentally uncomfortable!

Luckily I had my naturopathic physician appointment later that afternoon, so I left the doctor still feeling like I had options I was pursuing. I started out by giving the doctor (also the clinic director) my background, both my recent nausea issues and my mental/physical medical history. She was not very happy about the fact that my doctors had put me on Omeprazole (an antacid), nor did she approve of any other medications and probiotics I have been taking. It was a bit off-putting – she never told me to go off what my doctors had put me on, which I appreciated, but also made me feel like it’s possible that what I’m already taking has been hurting me. I still took it all with a grain of salt, though. I know that her way of approaching medicine is completely different from the traditional approach, which looks primarily for something functionally wrong.

Next, she had me lie down on her massage table (holy crap it was comfy!) and she felt all over my abdomen. Not just feeling – pushing! Really trying to get a handle on where exactly everything was. She pushed on an area up toward my chest, and it was hard for her to do so. She said that the reason for that was because my stomach was actually higher up than it should be – usually brought on by an acute incident, like straining to lift something. But sometimes, it can happen over time due to high anxiety – more likely in my case. Whatever the cause, she had me take a DEEP breath in and then breathe out very slowly. As I did so, she actually pushed REALLY hard down on that area toward my chest I mentioned before, to push my stomach back down where it “should” be. After this was complete, I took a deep breath in. I actually felt like my lungs had more room to expand! Perhaps it’s all or partially in my head. I acknowledge that. And she did not say that it was going to cure me. Quite the opposite – she said it probably wasn’t even the sole cause of my nausea, but a contributing factor, and that her “fix” also did not usually stay in place after just one session. Still, I felt pretty strange afterward – in a good way! Something definitely felt different. I also left her office with a “prescription” for three things – a digestive enzyme, a probiotic (one of the few on the market she likes), and an herbal remedy called Pulsatilla (which is available at Whole Foods). It’s pretty fascinating that she picked Pulsatilla out for me, because as she described the kind of people it’s meant for, I kept nodding my head and saying, “Yup, that’s me.” She cited inner mental battles, too much rigidity, and love of white foods (gimme dem carbs). Pulsatilla comes from a flower found in meadows. The flower itself however is toxic when ingested in its pure flower form. There also isn’t much medical evidence about its efficacy – or even the safe levels of the dried form that are OK to take. I am fine with taking digestive enzymes and a probiotic…many people take these without harm. However, I’m nervous about taking the Pulsatilla after reading up more about it online. I’m sure nothing that could really hurt me would be sold at Whole Foods, and I’m trying to keep an open mind, but I don’t really feel comfortable taking it (it comes in the form of a bead that is placed under the tongue). Therefore even though I purchased it, I’ve decided to hold off. And there’s another reason for that too.

Dare I say the last several days I’ve felt…completely normal? I don’t want to jinx myself. And on Friday, I still had a “nervous” stomach that felt nauseous in the morning and made some weird noises anytime I ate. But Saturday and Sunday, I felt fine. No weird noises, no nausea. Nothing that even made me feel like it might “come on” if I drank coffee or ate fibrous food.

Welcome back, my beautiful salad!

I am not saying that I feel better because of what the naturopathic physician did when she “moved” my stomach back to its rightful place. It could very well be the Omeprazole finally taking effect. Or maybe this is a virus that finally has gotten its ugly self out of my body, once and for all. Or maybe five minutes from hitting “Publish” on this post, I’ll feel nauseous again.

Frankly, I do not care. I had a really good weekend and I felt well. I’m going to keep taking the Omeprazole and also go see the naturopathic physician in a couple of weeks for a follow-up, and explain my hesitation about the Pulsatilla. If I don’t feel nauseous again, that’s awesome. If I do, I’ll keep trying to figure out what’s wrong. Now if you will excuse me, I am going to go be thankful for feeling well. 🙂

Have you ever visited a naturopathic physician?

Have you ever decided not to take medical advice, be it from a traditional or alternative doctor?

A big congrats to the winner of the Mikarose giveaway for a $50 gift certificate! The winner is….Paige!

Ooh la la is right! Congrats Paige – I have given your info to Mikarose!

Alright, so that’s it for this Fashion Friday. I know…what?! Well, I’m at BlogHer ’12 right now in NYC have an absolute BLAST. I still need to share my Baltimore adventures, J. Timothy’s meetup recap, Barcelona Patio Party review, and now THIS weekend with you guys. Man, am I too blessed to be stressed or what?! I’m off to write this week’s Oatmeal Toppings and then headed to my first blogucational session of the day, The Brand-Blogger Connection, with my friend Natasha. We are going to see Martha Stewart deliver the keynote speech at lunch today! Oh, and Kate Gosselin herself (yup, Kate Plus 8) is in the Expo Hall booth today from 11-1pm and 3-5pm, so needless to say I’ve made it the day’s goal to get a picture of Cait Plus Ate with Kate Plus 8. WISH ME LUCK!

Keep an eye on my Twitter and Instagram all weekend for my #BlogHer12 exploits! Some funny pics have already gone up….

At the Gorton’s Seafood booth…if you like it then you shoulda #PutAWheelOnIt?